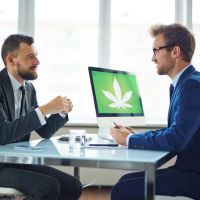 Know about the Growth of Executive Level Cannabis Job Though the cannabis industry is at a nascent stage, no doubt it is rapidly growing giving way to a number of job positions for individuals looking forward to work in this industry. Individuals who have relevant experience in other industries are eligible to apply for these executive job positions. This transition of cannabis from ‘illegal to legal’ has created an industry that gives a lot of career opportunities with pay packages which can be compared with the remuneration given to same level potions in other industrial sectors.

Executives from other industries switch to the cannabis industry

This transition saw an inflow of top executives coming from different industries. According to reports, there is stability attained by the cannabis industry in Canada now when it comes to paying the employees. As per reports published, the last year saw the arrival of many such top-level chief executive officers from other industries like the investment and pharmaceutical sectors.

Now many of the big licensed producers have reorganized their human resource departments and hiring strategies. They hire several employees from cannabis firms. The Executive Search Firms have helped the organization a lot in this process by providing a team of talented professionals to create value for the cannabis industry.

These executive-level cannabis professionals were either worked as entrepreneurs or founders or initial investors in other companies. But the job positions are becoming more specific now and now companies prefer candidates with prior relevant experience.

Cannabis organizations feel that they need top-level cannabis executives for their growth and they are ready to pay them. This is also because the cannabis firms always want the executives to work for a long time. As a result currently, the compensation of cannabis executives and master growers come at par with other industries and sometimes higher than that.

According to a documented report, Aurora city in the US registered the highest executive compensation package touching CA $ 2.4 million. This is laudable.

The compensation package for senior-level executives includes various incentives based on their performance apart from combining the base salary, health benefits and short term/long term incentives etc.

A great future holds for cannabis industry after the legalization has made possible the coming of a series of executive jobs in this field. It has got stability and therefore in the coming years, the number of executive levels job positions will be created. It is a gradual reflection of the industry which is on the path of attaining maturity.

With the coming of large cannabis firms, the compensation packages will grow manifold. Certain job position like the master grower, which is regarded as one of the highly profitable jobs in the cannabis industry with a current average annual salary of CA $ 80,000 will also, be changed into a more senior level. Thus a whole change is expected in the cannabis job structure.

This post is tagged in:
Save
Subscribe to Posts by CannabizTeam
Get updates delivered right to your inbox!

Will be used in accordance with our Terms of Service
More posts from CannabizTeam
Add a blog to Bloglovin’
Enter the full blog address (e.g. https://www.fashionsquad.com)
Contact support
We're working on your request. This will take just a minute...
Enter a valid email to continue