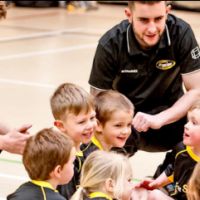 According to the latest health study report, children who had been associated with any form of outdoor sports have shown better all-round development than children who did not get much involved in any outdoor game. Among so many outdoor sports- cricket, basket ball and baseball, one sport that significantly helps a child to develop good movement skills and physical agility, is football.

Playing football brings about the necessary developments in the mind and body of the children while teaching them some elementary movement skills. Kids football coaching in Swindon inlcude physical activities like kicking, hopping, catching, running, throwing and dodging. These movements, in turn, help the children to attain good quickness, coordination, speed and balance.

Football for kids brings about improved mental and physical capabilities by learning new skills. Let us look at the various movements in football coaching and the kind physical and mental improvements it brings in children:

1. Running- Football is a game that involves not little but a lot of running. Children who are yet to reach puberty, requires the same kind of running practiced in soccer- scurrying short distance followed by short recovery time. Coaches conducting kids football coaching in Swindon, before starting the class make children jog around the field in their half speed. Do you know why? The coaches do this to help the player develop quickness. Also, it acts as a small warm-up session before actually kicking the ball.

2. Hopping, skipping and jumping- While playing football in Swindon, kids will have an encounter with their opponents who will try to grab the ball. As a result, children need to hop, skip and jump to tackle the opponents. By doing so, they master their ability to be flexible and also improve their speeds in changing from one movement type to the other. In addition, they become aware of the significance of hopping, skipping and jumping-especially when and where to use these.

3. Agility, Balance, Coordination and Speed(ABCS)- The central nervous system in children is yet to completely develop and so their agility, balance, coordination and speed are not up to the mark as adult players. The bodies of children in the age group of 2-11 years old require appropriate stimulus that will send signals to the central nervous system and bring forth improved ABCS in children.

4. Kicking- From the word ‘football’, it can be easily discerned that the foot is the main body part used in this game and hence kicking forms the primary action of the player. There are various techniques to kick the ball which the child gradually learns in his/her soccer coaching and classes for kids in Swindon. Kicking helps to increase the strength of the foot as well as enhances the muscular development. With increased muscular development of the feet, the player can easily aim the goalpost and kick the ball from any location.

Conclusion- From the above discussion it is clear that soccer has got a plethora of health benefits for your child. Having a healthy mental and physical growth from the young age is necessary and only then will your child be able to pursue his future dreams. Involving your child in soccer is the wisest way to introduce a strong, spirited and vigorous life. To know more about our football classes for kids, visit http://www.firststepssoccer.com/wiltshire/

This post is tagged in:
Save
1 love 1 save
Subscribe to Posts by First Steps Soccer
Get updates delivered right to your inbox!

Will be used in accordance with our Terms of Service
More posts from First Steps Soccer
Add a blog to Bloglovin’
Enter the full blog address (e.g. https://www.fashionsquad.com)
Contact support
We're working on your request. This will take just a minute...
Enter a valid email to continue