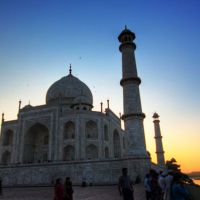 The grandeur of the Taj Mahal is known worldwide. Its gorgeousness is dazzling and doesn’t fail to amaze someone. All of us know that this building is a symbol of love and was built by the famous Mughal Emperor Shah Jahan in remembrance of his dear wife, Mumtaz Mahal. There is so much more to this beautiful mausoleum which we should know. If you are planning on taking the Same day Taj Mahal tour from Delhi, then there are some facts you would love to know about this ivory-white beauty that stands gleaming in the beautiful city of Agra. 1.Taj Mahal is made of different types of stones. For the foundation, external surfaces, and masonry work white marble, black slate, red sandstone, grey, and yellow sandstone have been used. The white marble was brought from Makrana mines in Rajasthan. There are semi-precious stones used in the inlaying work which include turquoise, cat’s eye, bloodstone, jade, lapis lazuli, agate, coral, and onyx. These semi-precious stones were imported from countries like Arabia, Tibet, Afghanistan, and China. The mosaic work on the floors, exterior turrets, and bold inlays had rare stones which include stones of serpentine (zeher mohra), goldstone (tile), jojoba stone (rocks in the shape of spherical balls), magnet stone (magnates), abri, naked and Kathu. There are about 28 different types of stones both precious and semi-precious that have been used in their decoration.

2.The main architect of this mausoleum was a Persian by the name Ustad Ahmad Lahori. There were 20,000 artisans employed in its construction who drove the project under his commands. About 1,000 elephants worked hard to carry the materials required in their construction work.

3.The surrounding gardens of the Taj Mahal earlier had fruit-bearing trees and flowers like roses and daffodils.

4.The word ‘Allah’ has been written in 99 different ways. The calligraphy is done in Thuluth script, and the man behind the beautiful writing was Amanat Khan Shirazi. scx

5.The original tombs of Mumtaz Mahal and Shah Jahan are situated in an inner chamber that is simple and plain, as per the Islamic tradition. But the outer part of the tomb is intricately decorated.

6.Besides Shah Jahan and Mumtaz Mahal, there are other graves in this mausoleum. Some of Shah Jahan’s wives and servants who were loyal to him have their graves here too. However, they have been buried outside the main Taj Mahal but in other mausoleums within the complex.

7.The ivory white color of Taj tends to show different hues according to the sun and moonlights. It has a pinkish shade when the sun is rising, when the sun is bright you can see its original ivory white, it appears white in the evening, bright golden under the moon, and gets a shade of blue under the full moon.

8.There is no flying zone around the Taj Mahal - aircraft cannot fly over it. No vehicles other than the ones that are electrically driven are allowed near it. This is done to preserve this architectural splendor which seems to be fading from its original color because of the pollution.

9.The River Yamuna has played a crucial role in helping this monument survive. The foundation of the Taj Mahal is made of wood – timber, which isn’t a long-lasting material. But the Yamuna has kept the wood moist and strong.

10.Taj Mahal happens to be 5 feet taller than the famous Qutub Minar which is usually seen as one of the tallest brick minarets.

You can take a Same-day Taj Mahal tour by Train, train, or flight from Delhi. It is just about 4 hours from the capital city. Avoid going there during Ramadan and on Fridays because tourists are not allowed to visit on these days. Taj Mahal’s beauty is something that you should definitely admire once – plan your journey to Agra soon!

This post is tagged in:
Save
Subscribe to Posts by Shiv02
Get updates delivered right to your inbox!

Will be used in accordance with our Terms of Service
More posts from Shiv02
Add a blog to Bloglovin’
Enter the full blog address (e.g. https://www.fashionsquad.com)
Contact support
We're working on your request. This will take just a minute...
Enter a valid email to continue