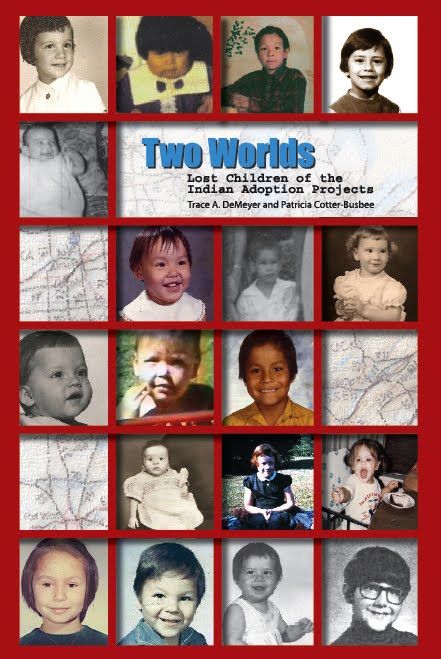 Though not scholarly, this book is of great significance to scholars of Native American Studies who have only begun to unearth the policies and practices that resulted in up to 35 percent of all Indigenous children being separated from their families by the 1970s. Some of these children grew up in institutions, but many others were fostered or adopted by non-Indian families.

Two Worlds includes adoptees’ firsthand accounts interspersed with reprinted newspaper articles, congressional testimony, and some historical background. We learn that social workers and missionaries often put intense pressure on young unwed Indian mothers to relinquish their infants for adoption. Editor Trace DeMeyer explains something, too, about the Indian Adoption Project that the Bureau of Indian Affairs and the Child Welfare League of America jointly administered from 1958 to 1968, which promoted the adoption of Indian children by non-Indians.

These personal narratives show that many Indian children struggled within their adoptive families. Some report physical and/or sexual abuse. Others recall emotional cruelty with racial overtones. Gail Huggard (Ojibwe), for example, recounts, “One of my memories as a child is driving by Indian reservations. My mother would point at people, ‘Look at those dirty, rotten Indians’” (101). Adoptees describe a troubled adolescence in which their adoptive parents had few resources to help them navigate the intense racism and sense of dislocation that they experienced. Even in the best-case scenarios, many adoptees longed to know about their tribal communities and establish connections with their birth families. As Susan Smith (Grand Portage-White Earth Ojibwe) put it, “(My) childhood was happy and stable. It’s not that I wanted to replace my parents. I just wanted to know where I came from and who I looked like” (162–63).

The book primarily serves as a resource for adoptees themselves, but it may also help scholars understand this historical phenomenon. Most child welfare and adoption files are closed to researchers, and few long-term studies of the transracial adoption of Indian children have been carried out, so there is a desperate need for collections of adoptees’ (and birth families’) stories. While focused primarily on the experiences of American Indian adoptees in the United States, this book also includes a smaller section on Canadian Indigenous adoptees. A number of the selections come from adoptees of Great Plains Indian origin.
Copyright © 2014 Center for Great Plains Studies, University of Nebraska–Lincoln

Margaret Jacobs. "Two Worlds: Lost Children of the Indian Adoption Projects by Edited by Patricia Cotter-Busbee and Trace A. DeMeyer (review)." Great Plains Quarterly 34.4 (2014): 402-402. Project MUSE. Web. 14 Nov. 2014. .
Jacobs is the author of White Mother to a Dark Race and A Generation Removed.
I am thrilled to see this! ...Trace

Will be used in accordance with our Terms of Service
Forgot Password?
Subscribe to AMERICAN INDIAN ADOPTEES: Lost Children, Lost Ones, Lost Birds
Get updates delivered right to your inbox!

Will be used in accordance with our Terms of Service
More posts from AMERICAN INDIAN ADOPTEES: Lost Children, Lost Ones, Lost Birds
Add a blog to Bloglovin’
Enter the full blog address (e.g. https://www.fashionsquad.com)
Contact support
We're working on your request. This will take just a minute...
Enter a valid email to continue