The one with the crochet balls


So I found a couple of polystyrene balls which I've had in a box for yeeeears and I decided to do something festive with them.

I was thinking along the lines of homemade Christmas baubles for the kids' teachers, but actually, these would look great displayed in a big bowl too.

The first ball is made using good old double crochet in continuous rounds. A few increases and decreases help create the shaping- you'll need to use a stitch marker so you know where the beginning of each round is.
The second uses joined rounds and a few different stitches and techniques, but is just as simple to make.

Fancy making one, or two? Then here's what to do...
(Oh and BTW if you're quick, you can still use the fab 10% discount code, ABXMAS off RICO Creative Cotton from Black Sheep Wools. It's valid until 2nd December 2014...)
I used: 2 x 70mm polystyrene balls (if you haven't got these, then you could try stuffing them firmly with toy filling instead), Odds and ends of Rico Creative Cotton Aran from my stash: Red (05), Orange (74), Light Green (40), Light Yellow (63), Turquoise (36), Candy Pink (64), Fuschia (13) 4mm hook, Stitch marker Ribbon for hanging loop.
(This pattern is written in UK terms. US equivalents are given below) 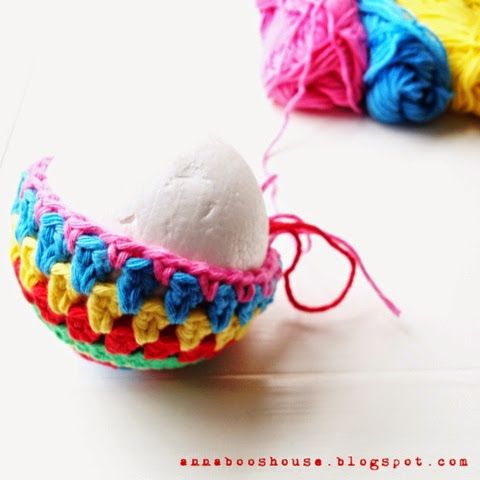 Enjoy making and have a fab week,
Sarah x

View original
Save
19 loves 7 saves
Subscribe to Annaboo's house
Get updates delivered right to your inbox!

Will be used in accordance with our Terms of Service
More posts from Annaboo's house
Add a blog to Bloglovin’
Enter the full blog address (e.g. https://www.fashionsquad.com)
Contact support
We're working on your request. This will take just a minute...
Enter a valid email to continue