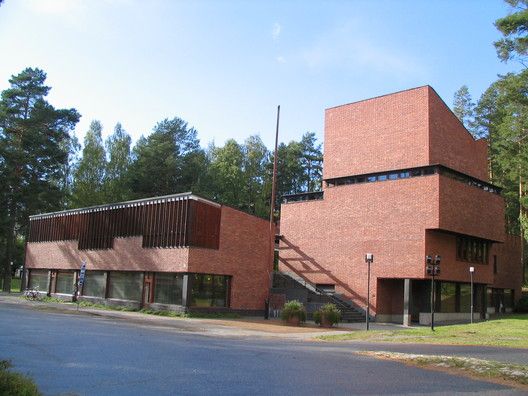 Occupying the center of a small farming town in Finland, Säynätsalo’s Town Hall might appear almost too monumental for its context. Designed by Alvar Aalto in 1949, the town hall is a study in opposition: elements of classicism and the monumental blended with modernity and intimacy to form a cohesive new center-point for the community. These and other aspects of the design initially proved somewhat divisive, and the Town Hall has not been without controversy since its inception.

The town of Säynätsalo, located on a small island in central Finland’s Lake Päijänne, was first laid out in 1945. A few years later, the community organized an architectural competition to find a design for a town hall to complete their new municipality which was, by then, the home to around 3000 people. The civic complex was to comprise a council chamber, local government offices, a community library, staff apartments, and retail space that would ultimately allow the functions of the town hall to expand beyond their original parameters.(1)

Aalto’s winning proposal for the project follows the traditional European court-and-tower model of a civic center. The complex consists of two wood-framed brick buildings: the rectangular library block and the U-shaped government building. These two buildings act as a retaining wall that allowed Aalto to fill the central courtyard with earth excavated from the slope of the site; thus, the courtyard is lifted one story above the surrounding landscape.(2)

This difference in elevations creates two contrasting experiences of the building, depending on whether one is inside the courtyard or observing from outside. Inside the courtyard, the facades of the surrounding library and office spaces are only one story tall; however, outside observers instead see an imposing two-story facade, much of which is monolithic, unornamented brick.(3) The two staircases leading up to the courtyard from ground level are likewise divergent in style. The eastern staircase is formal and rectilinear, with two flights carved from impeccably hewn granite. The western staircase has a more irregular footprint, and is made not of stone or brick but of terraced sod held back by wooden planks.(4) 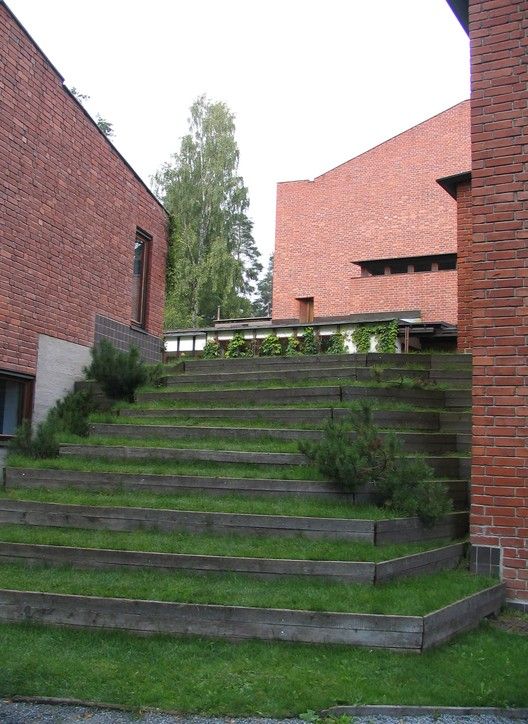 The courtyard itself is only partially paved, continuing the juxtaposition of brick and grass begun by the two staircases. The entrances to the civic offices and the public library open onto the courtyard, allowing it to serve not only as an open circulatory space, but also as a public plaza for the benefit of the entire town. The sense of public accessibility is heightened by the extensive glazing of the entrance lobby and corridor lining two sides of the courtyard. The permeability of these spaces makes for a stark contrast with the most prominent feature of the town hall: the council chamber.(5)

Directly across from the glazed corridor, branching off the equally bright and airy entrance hall, is a darker more narrow stairwell lined with brick. This staircase, which leads to the council chamber, turns back on itself at a landing halfway up, shielding the chamber from view of the lobby; the stairwell is also hidden from exterior view thanks to its east-facing clerestory windows.(6) 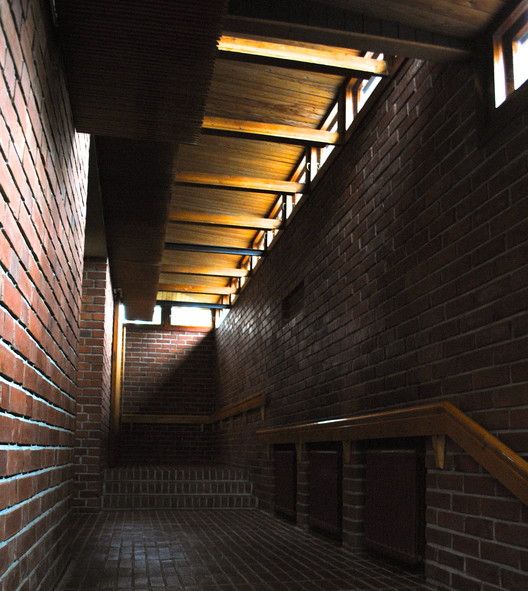 Entry into the council chamber brings one into space of a much grander scale than that of the stairway leading to it. The room is roughly cubic, with the distance from floor to ceiling nearly matching the length of the walls. The ceiling, whose slope matches that of the roof, is visibly supported by wooden struts fanning out from two central beams; these struts support the roof entirely, negating the need for heavy built-in framing that would obstruct ventilation between the interior and exterior surfaces of the roof.(7) The council chamber is naturally lit by a densely-louvered west-facing window, with hanging lamps illuminating both the desks below and the wooden trusses above them.(8)

It was the council chamber that provoked the most controversy when Aalto proposed his design to the people of Säynätsalo. The municipal board members in charge of the building were unconvinced that a town as small as theirs could justify the construction of a 17-meter tall council chamber, especially given the high price of the brick specified for the project. Aalto, however, reportedly replied “Gentlemen! The world’s most beautiful and most famous town hall, that of Siena, has a council chamber 16 meters high. I propose we build one that is 17 meters.”(9)

Aalto’s appeal to the board members wasn’t the only aspect of his project that made reference to historical precedents. Despite its Modernist aesthetic, Säynätsalo Town Hall has been heavily influenced by Renaissance and Medieval Italian architecture. The tower does not only allude to its counterpart in Siena; combined with the courtyard arrangement below, but also antecedents like Piazza San Marco in Venice, as well. The library and civic programs facing onto a central square mirror a similar arrangement in the Piazza Vecchia of Bergamo.(10) Smaller details also owe their inspiration to Italy: the terraced earthen stairs to the plaza are also based on an Italian model.(11) 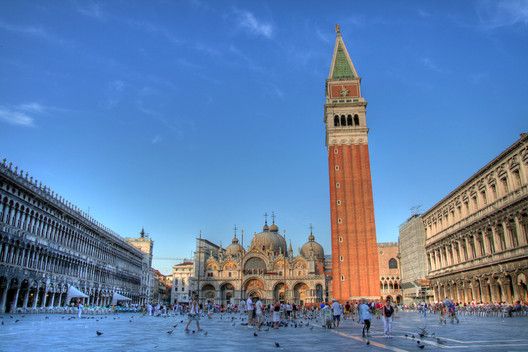 Säynätsalo Town Hall underwent significant restoration work, which began in 1995. Säynätsalo municipality had become a part of the city of Jyväskylä in 1993, with its town hall becoming a legally-protected landmark the following year. The restoration preserved the building in its original form and materials as much as possible; only damaged components were replaced, with pieces simply weathered by time left as they were. The work was completed in time for Alvar Aalto’s hundredth birthday in 1998, preserving his civic center for generations of the future to visit and admire.(12)


View original
Save
Subscribe to Arch Daily
Get updates delivered right to your inbox!

Will be used in accordance with our Terms of Service
More posts from Arch Daily
Add a blog to Bloglovin’
Enter the full blog address (e.g. https://www.fashionsquad.com)
Contact support
We're working on your request. This will take just a minute...
Enter a valid email to continue