After a brief stint rebranded as "Gillette Venus Naked Skin by Braun" (I always did think that was a bit of a mouthful anyway), the SmoothSkin brand is back at Boots with even better specs. It's now available from Boots stores or Boots.com for £299.99 (currently £100 off the regular price - And don't forget to use your Boots card to get 1196 points!).

If you've read any of my previous posts about IPL products (here, here and here), you'll know I'm a massive fan of Boots SmoothSkin by iPulse. I rushed out to buy the original Boots SmoothSkin unit when it came out five years ago and have never looked back. I honestly don't have any hair left on the areas I treated.... sounds too good to be true but it really did work for me.

The latest model is called "Boots SmoothSkin Extra". While it looks very similar to the previous SmoothSkin Plus, the main difference is that it now has a whopping 100,000 flashes (compared to 10,000 in the original unit and 20,000 in the "Plus" unit). I've also noticed the bolder statement, "Permanent hair reduction after just 4 treatments" (although you still need to use it once a week for 12 weeks to catch all the hairs at the right stage of their growth cycles).

Here's how the box appears: 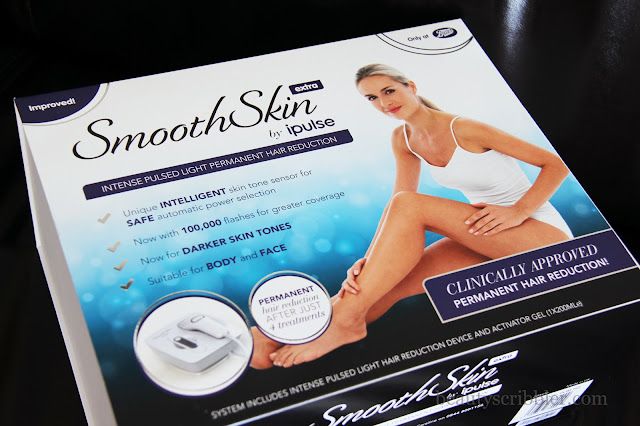 The handset is the same ergonomically designed shape, with the same 12mm x 25mm treatment window (I'm sorry to report that it's not yet any bigger! But it's still the biggest treatment window on the market at least): 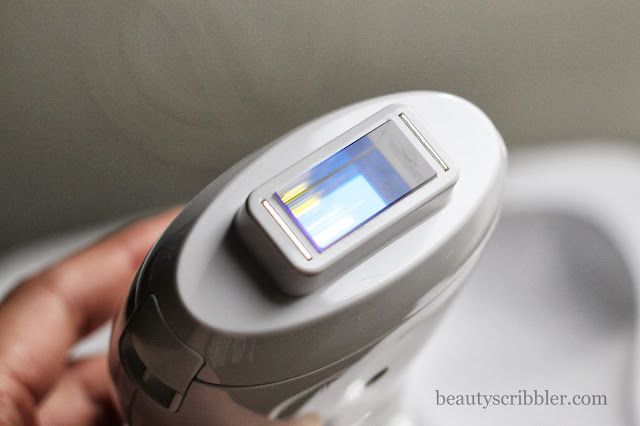 The unit comes with a Skin Tone Sensor that doubles up as the energy setting that will be used during treatment. It docks neatly in the unit and lifts out easily. All you need to do is press the sensor window to the skin to get a reading of your skin tone, then replace the sensor back onto the unit. You can then use that energy setting, or press the button to select a lower setting (you won't be able to select a higher setting than allowed for the skin tone detected).

My skin tone is detected as 2 or 3 depending where I apply the sensor. For example, my face and arms are darker than my belly. 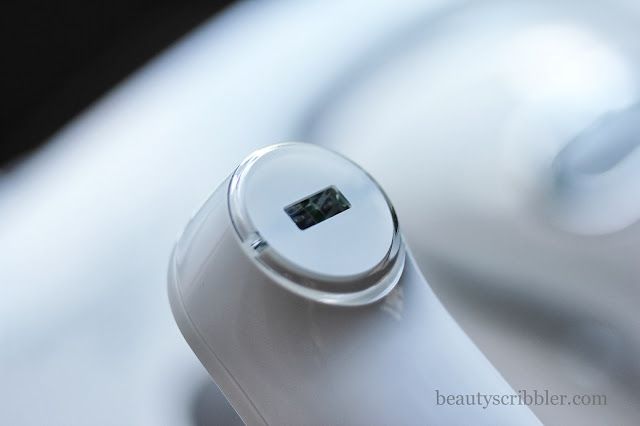 The Skin Tone Detector also has a bulb life indicator, but honestly I'd be surprised if anyone managed to reach 100,000 shots with normal use.

Boots SmoothSkin Extra comes with a tube of Activator Gel. I recommend keeping this in the fridge and using it generously to help keep the skin cool when the treatment window starts getting hot during use.

The latest specs are:


Aside from the built-in Skin Tone Sensor, the unit feels very similar to the Boots SmoothSkin Plus which I reviewed here. The time between shots and the time before the treatment window starts to feel hot are similar, although still much improved from the original SmoothSkin which I bought five years ago!

Rather than me typing out my FAQs, I'd recommend reading my lengthy post here, which has a lot of information which I gathered from the folks at Boots and iPulse. However, some other tips I would give are:

Don't try to justify the cost of Boots SmoothSkin Extra by comparing it to the cost of buying razors / getting wax treatments.


Honestly, it just won't add up. It probably still costs more than you'll ever spend on razors in your lifetime! You'll only waste time debating about this in your head and you'll never get on the road to being permanently hair-free. Instead, think about the convenience and freedom of never having to shave again - which you can have for just a few hundred pounds. That's a bargain if you ask me.

Don't be disheartened if some hairs still appear to grow through even after 12 weeks of using the Boots SmoothSkin Extra - occasional top-ups will sort them out.


I found I needed to top up every few weeks, and then every few months before the hairs stopped coming completely. I think I've gone over a year now without treating my underarms or bikini line and they are still completely smooth and hair-free.

For the first 12 weeks, keep your Boots SmoothSkin Extra in the place you will be using it, ready to go when it's time for your weekly treatment.


If you meticulously pack it away each time, it'll only feel more like a chore to get it out and use every week. You need to make it as easy as possible to pick up and use so that it doesn't become something stuffed at the back of your wardrobe collecting dust. Put up with the mess of having it out for a few months - it's worth it.

Don't skimp on the Activator Gel - it does actually help


The main purpose of the gel is to help the light energy get safely to the hair. But it also really helps to keep the skin cool during treatment (especially when the gel is kept in the fridge), and to act as a guide to where you've treated as it will flatten out where the treatment window has been. If you're going to do large areas like legs, apply the gel in smaller areas as you go along, so that it doesn't dry up or lose its coolness on areas that are waiting to be treated.

If you're going to use Boots SmoothSkin on your face and you get ingrown hairs from razors, try using a personal trimmer instead.


One of those battery operated pen-shaped things that costs no more than £10 from Superdrug etc. It won't cut the hairs so close to the skin, meaning that the hairs won't get caught under the skin.


In summary, I think the Boots SmoothSkin Extra is a great buy and if you're considering doing IPL at home, based on my experience I'd say go for it!

If you have any other questions, the iPulse team are usually very responsive and helpful and can be contacted through their Facebook page, Twitter, their website, or by emailing askanita@ipulse.co.uk.

View original
Save
3 loves
Subscribe to Beauty Scribbler
Get updates delivered right to your inbox!

Will be used in accordance with our Terms of Service
More posts from Beauty Scribbler
Add a blog to Bloglovin’
Enter the full blog address (e.g. https://www.fashionsquad.com)
Contact support
We're working on your request. This will take just a minute...
Enter a valid email to continue