The Book of the Duchess by Geoffrey Chaucer. 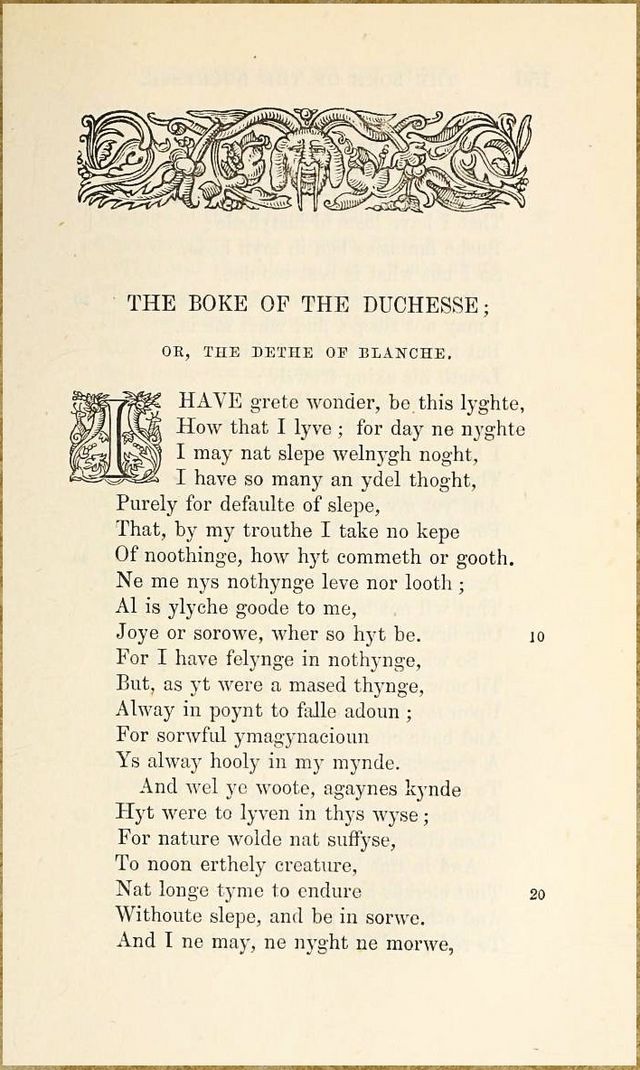 The Book of the Duchess is one of Chaucer's earliest works, a 1334 line poem written somewhere between 1369-72. It's also known as The Dethe of Blanche, and most probably was written at the request of John of Gaunt to commemorate the death of his wife, Blanche of Lancaster. It is one of the most moving poems I've read on loss and mourning, and the power of literature.
Like Parlement of Foules (1382 approx.), the poem opens an explanation of the narrator's circumstances, and then the turning to a book to help him resolve his situation. In The Book of the Duchess he describes his chronic insomnia -


I have gret wonder, be this lyght,
How that I lyve, for day ne nyght
I may nat slepe wel nygh noght;
I have so many an ydel thoght
Purely for defaulte of slep...

His lack of sleep has numbed and depressed him - "Al is ylyche (equally) good to me - / Joye or sorowe, wherso hyt be - / For I have felynge in nothyng." He turns to Ovid's Metamorphoses "to rede and drive the night away", and reads from Book XI - 'Ceyx and Alcyone'. Zeus is angered by Ceyx and throws a thunderbolt at his ship whilst he is at sea, killing him. Morpheus, the god of dreams, disguises himself as Ceyx and in a dream-vision tells his wife Alcyone of his death. She drowns herself, and the two are changed by the gods into Halcyons (a kind of Kingfisher). The overall theme of The Book of the Duchess, intense and passionate love and subsequent loss, is thus set. The narrator writes that this tale saved his life:


For thus moche dar I saye wel:
I had be dolven everydel (buried completely, every bit),
And ded, ryght thrugh defaulte of slep,
Yif I ne had red and take kep (taken heed)
Of this tale next before (previously).

Marriage of John of Gaunt, Duke of
Lancaster and his first wife
Blanche of Lancaster,
by Horace Wright (1914).
He goes on to contemplate Morpheus and describes what he would give if Morpheus would intervene and allow him to sleep. And sleep he does, after these eight years of insomnia:


I hadde unnerth (hardly) that word ysayd
Ryght thus as I have told hyt yow,
That sodeynly, I nyste how.
Such a lust anoon me took
To slepe that ryght upon my book
Y fil slepe, and therwith even
Me mette so ynly swete a sweven (dream)...

He describes the dream, warning that it was "So wonderful that never yit / Y trowe no man had the wyt (intelligence) / To konne wel my sweven rede (to read my dream correctly)".

And so Chaucer, or rather the narrator, goes on to describe this wonderful, fantastic, and poignant dream. Having followed a hunt, the narrator encounters a knight dressed in black. The knight describes to him the loss of his beloved; he in insensible, almost mad with grief, railing against life and Fortune, which he believes he and she are a victim of. The narrator tries to comfort and reason with the knight: as this poem was written to commemorate the death of Blanche of Lancaster, it is no leap of imagination to hear Chaucer's attempts to reason with and comfort John of Gaunt.

It is, in short, a magnificent poem and I wholly recommend it. I'm enjoying reading Chaucer's complete works and I'm finding that the more I read the less I depend on glossaries. It is best to read out loud. I think for my next Chaucer I'll go for The Romaunt of the Rose. And until then I have another Chaucer review coming up - a biography by Peter Ackroyd, which I read over the weekend. I'm very much into Chaucer at present, and I can see any reading plans for the winter going out of the window! 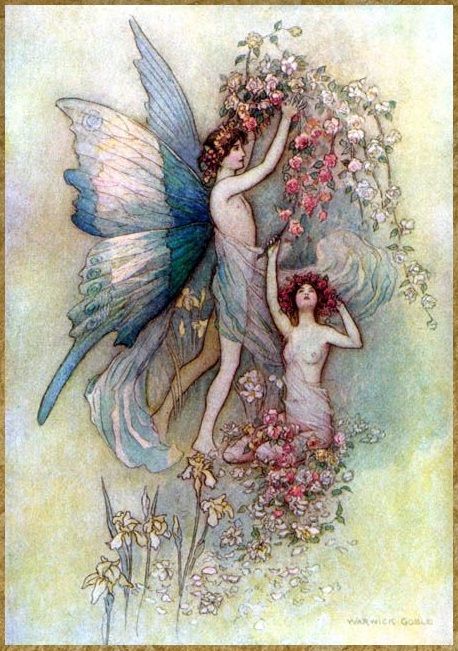 The Book of the Duchess by Warwick Goble,
from The Complete Works of Geoffrey Chaucer (Macmillan in 1912).

View original
Save
Subscribe to Behold the Stars
Get updates delivered right to your inbox!

Will be used in accordance with our Terms of Service
More posts from Behold the Stars
Add a blog to Bloglovin’
Enter the full blog address (e.g. https://www.fashionsquad.com)
Contact support
We're working on your request. This will take just a minute...
Enter a valid email to continue