It's one thing to learn to curtsy properly. It's quite another to learn to curtsy and throw a knife at the same time. Welcome to Finishing School.
Fourteen-year-old Sophronia is a great trial to her poor mother. Sophronia is more interested in dismantling clocks and climbing trees than proper manners--and the family can only hope that company never sees her atrocious curtsy. Mrs. Temminnick is desperate for her daughter to become a proper lady. So she enrolls Sophronia in Mademoiselle Geraldine's Finishing Academy for Young Ladies of Quality.

But Sophronia soon realizes the school is not quite what her mother might have hoped. At Mademoiselle Geraldine's, young ladies learn to finish...everything. Certainly, they learn the fine arts of dance, dress, and etiquette, but they also learn to deal out death, diversion, and espionage--in the politest possible ways, of course. Sophronia and her friends are in for a rousing first year's education.

Gail Carriger writes comedic steampunk mixed with urbane fantasy. Her books include the Parasol Protectorate and Custard Protocol series for adults, and the Finishing School series for young adults. She is published in 18 different languages and has 13 NYT bestsellers via 7 different lists (including #1 in Manga). She was once an archaeologist and is overly fond of shoes, octopuses, and tea.
Gail has a fun newsletter: the Monthly Chirrup, sign up at
http://eepurl.com/X-1qT(less)

Things you Need to Know! This is the first book in a 4 book series
It's quite steampunk

I wasn't exactly sure where I stood on this book when I first picked it up. I won't lie to you, the cover did me in. I saw the cover and decided I wanted to read it. ALSO - I really loved The Infernal Devices from Cassandra Clare and since that was steampunk and Victorian, I decided to give this a try. I wasn't disappointed! You start out right away meeting Sophronia when she's taking part in her normal shenanigans. She's quite the troublemaker and loves to speak her mind! During these said shenanigans her mother is talking to a lady in the parlor about Sophronia attending Mademoiselle Geraldine's Finishing Academy for Young Ladies of Quality. As you can guess, Sophronia isn't pleased. Her mother makes her attend anyway and she is whisked off within 30 minutes of her mother agreeing! She right away meets two new friends, Dimity and Pillover. Right away Sophronia notices the differences in this school - they teach espionage as well as etiquette! It's all about knife throwing, being discreet and killing. During the ride to the school Sophronia discovers that Monique hides something called a prototype and it causes quite an uproar. This device causes flywaymen and the Pickleman to come after them and after the school to try to get it from them. Once arriving at the school Sophronia delves into her shenanigans again by way of exploring the school (where she meets the Sooties, breaks into rooms and just generally causes a ruckus) and by way of exploring their sister school, Brunsons. In the end it's up to Sophronia and her friends to discover where Monique hid the prototype and keep it from the flywaymen and the Pickleman!

For some reason this is how I imagine the Pickleman ship being, LOL!
Sophronia is a hoot of a character. She always has smart remarks, witty responses and knows what to do in every situation. I don't think there is anything you can pull over on Sophronia. She's quite single-minded too, she won't stop until she gets what she wants; even if that means breaking the rules. She also seems like a genuine person, she has everyone's interests at heart and (attempts) to get along with everyone. She also has a special relationship with one of the Sooties (the boys in the boiler room) that is very sweet. 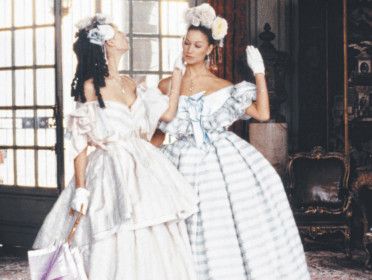 How I imagine Sophronia and Dimity
I also really enjoyed meeting her new friends Dimity, Pill and Soap. All three of them had amazing personalities and quips. The story wouldn't be what it was without them. There is also the villain of this story, Monique. She's a tough pill to swallow. She's constantly being mean and trying to get the others in trouble, you want to punch her in her face constantly.
I can say that I thought the beginning of the book was a bit slow (where she was being introduced to Mademoiselle Geraldine's and such - didn't seem like much was going on) but that's to be expected when there is world building. The ending more than made up for it! I love love loved it and cannot wait to read more!
Happy reading ya'll :)

Comments are DELICIOUS! and now that were using this new format for comments the TOP 3 Commenters will all win bookish goodies each month! So that is just one more reason to comment! This is open to everyone! So get commenting!
Don't forget to check out our Facebook, Twitter, Instagram! @CBookAddicts

View original
Save
Subscribe to The Book Addicts
Get updates delivered right to your inbox!

Will be used in accordance with our Terms of Service
More posts from The Book Addicts
Add a blog to Bloglovin’
Enter the full blog address (e.g. https://www.fashionsquad.com)
Contact support
We're working on your request. This will take just a minute...
Enter a valid email to continue