Snowed In / Locked Out Snowed in today? Me too! Perfect excuse to share a few photos from the snowy scene that was Big Sky, Montana this past weekend. A funny story, too! Our first night in Big Sky was one that I will truly never forget. After a layover in Denver and an hour shuttle from Bozeman, we finally arrived to our cabin in Big Sky late on Thursday night. And it was straight to the hot tub with a bottle of wine! (Priorities, obviously.) After bottle numero uno was empty, one of my friends was volunteered to run inside to get the next. Slight problem… The backdoor was locked. Yep, locked out of the cabin in our swimsuits at 3am. (Mind you, this is like 5am New York time. Running on fumes.) None of us had shoes, and I only had a sweater for a coverup. Do you see how much snow is surrounding the cabin in these photos?! A shitload.

After we realized that we didn’t have any phones outside (Well, we had one playing music, but it had died minutes before this happened. I can’t even make this up.), we realized that our only option was to either break a window (sayonara, security deposit) or to run through the snow to the front of the cabin where the front door had a keypad. THANK GOODNESS two of us had put the door code into our phones earlier that evening. Did we have our phones? Of course not. But he 100% remembered the first three digits of the code and I knew that I definitely remembered the last three digits. #teamwork

Trying to take the less dramatic route, the five of us decided to make a basically-naked dash to the front of the house. In the dark. In a snowy yard we had never even seen in the daylight. First, we tried to go to the right of the house and it was instantly knee deep… Nope. We hop back into the hot tub to re-evaluate. We see that the snow is seemingly less deep on the left side of the house so we muster up some courage to make a run for it. The first few seconds were fine as the snow was just ankle deep. Then, about halfway through the length of the cabin, DOWN WE GO. It was hip deep and we literally just sank in. Bare legs buried in the icy snow, PERFECT. I am pretty sure I saw my life flash before my eyes at one point. Once our screaming selves got into the house about 45 seconds later, two of my friends ran back downstairs to the hot tub to defrost. The other three of us ran to the bathtub because it was closer. That’s when we realized there was blood all over the place. I had scrapes and small cuts all over my left leg from the ice and a (later developed) massive bruise on the arch of my right foot. I did not realize one could get a bruise on the arch of his/her foot, but I now know it is possible. After tracking down the first aid kit, we were bandaged up and ready for bed!

It’s funny now and it was actually kind of funny in the moment, too. (Thank you, Pinot Noir.) Thankfully none of us were seriously hurt or frostbit!

Note to self: Always check a door lock. I should have known this from the amount of times I’ve been locked out of my apartment in New York, but I’ll blame the lack of sleep or the altitude or something. After that little adventure to kick off the trip, I made sure I was bundled up in my Sorels and Lands’ End Tulip-Hem Puffer Coat when we were out and about in the snow! Thanks for taking my photos, El! 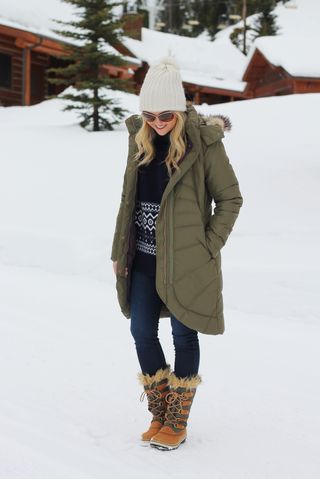 View original
Save
22 loves 2 saves
Subscribe to Bows & Sequins
Get updates delivered right to your inbox!

Will be used in accordance with our Terms of Service
More posts from Bows & Sequins
Add a blog to Bloglovin’
Enter the full blog address (e.g. https://www.fashionsquad.com)
Contact support
We're working on your request. This will take just a minute...
Enter a valid email to continue