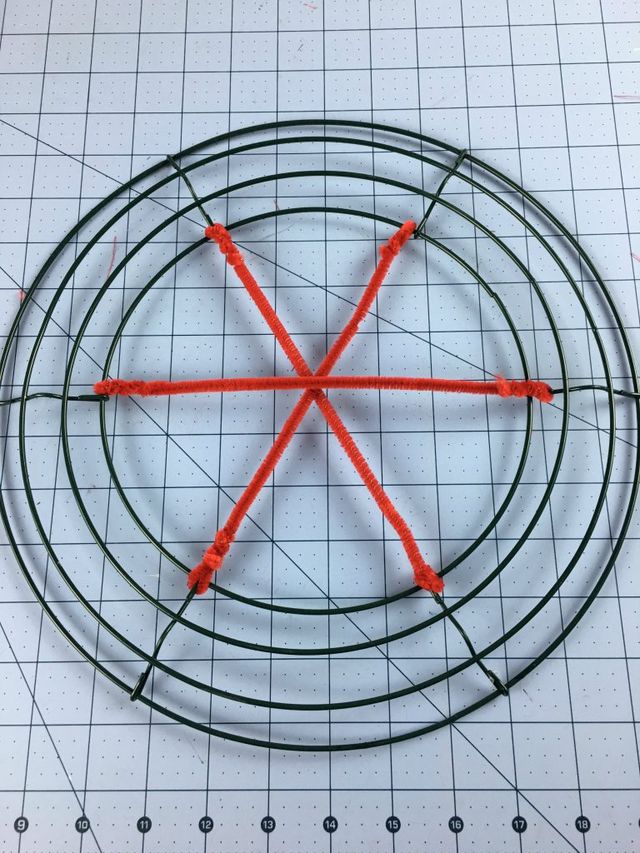 I began with a 12 inch wreath form and used red pipe cleaners to build a support across the center of my wreath form. This is easy to do as shown above.

I used 6 inch red deco mesh. I cut it into 8 inch pieces and rolled each of them into tubes, securing three of the tubes with a half piece of red pipe cleaner.

I attached my rolls with the same pipe cleaner I used to secure them.

I attached the clusters of tubes around the outside two wires of my wreath and pushed them together to make them quite full. 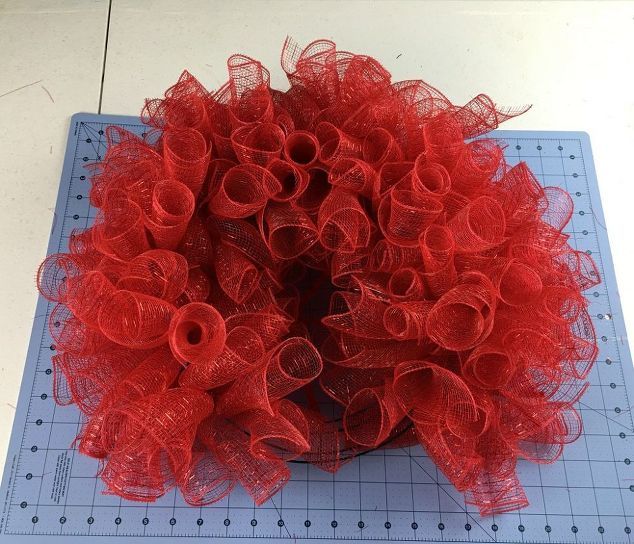 When I had 90 percent of my wreath complete I stopped to allow some room to attach my ladybug’s head.

I used vinyl and cut out large circles with my Fiskars extra large punch to add the dots to the back of my ladybug.

For my ladybug’s head, I really wanted to have a dimensional head, so I picked up a package of half-spheres of styrofoam. I wanted to paint it with black spray paint. Spraying styrofoam will often eat away at the foam, so I began by coating my styrofoam with a couple of coats of Mod Podge to protect it. The result is number one in the photo above and would have worked perfectly, but alas, it was much too small. I tried a plastic plate which I also painted, but it was too flat (number 2). This is kind of sounding like the story of Goldilocks now, isn’t it? Finally it came to me, one of those oversized ornaments I used so much at Christmastime. I cut it in half and painted half of it black and had a perfect head for my ladybug!

I used two pipe cleaners to fashion antennae for my ladybug. These were simply hot glued to my ladybug head.

I made a pair of holes in my half of a Christmas ornament and attached it to the wreath frame with a pair of pipe cleaners. I attached my vinyl circles to circles cut from a sheet of craft foam. Three pipe cleaners twisted together form the seam where my ladybug’s wings would meet and glued the dots to the deco mesh for my polka dots. Now he is ready to brighten the front door!

View original
This post is tagged in:
Save
1 love 3 saves
Subscribe to Celebrate and Decorate
Get updates delivered right to your inbox!

Will be used in accordance with our Terms of Service
More posts from Celebrate and Decorate
Add a blog to Bloglovin’
Enter the full blog address (e.g. https://www.fashionsquad.com)
Contact support
We're working on your request. This will take just a minute...
Enter a valid email to continue