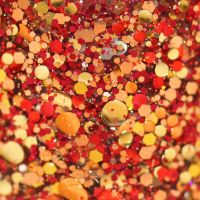 
Hey there! This week's prompts for the Crumpet's Nail Tart's 52 Week Pick n Mix Challenge are Music and "Not Worn Enough". I personally rarely wear any of the numerous textured polishes I have so I used this opportunity to use a couple of OPI's textures as the base for this music note stamping. And I really liked it so maybe I'll remember to use them a little more often now. 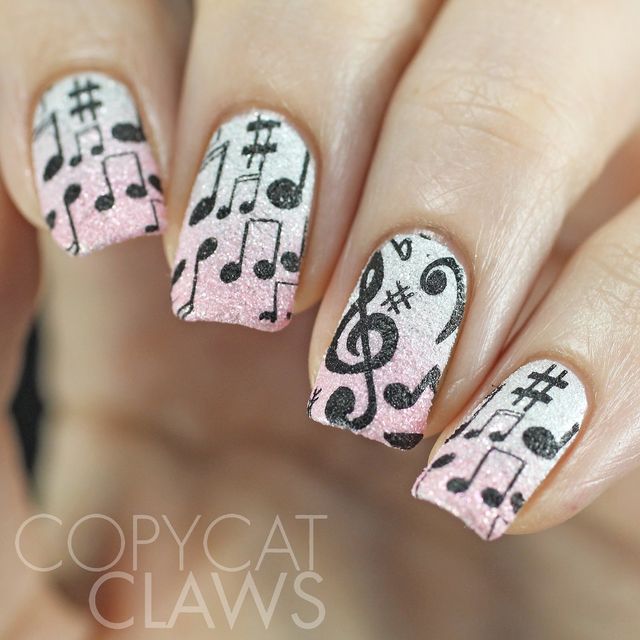 I know textured polishes were a huge fad a couple of years ago that seems to have died down. When they first came out I avoided them at all cost because I thought they'd be so textured that they'd catch on things. Eventually I tried them and saw that the texture is actually pretty minimal so I bought a bunch. I think I don't wear them often for a couple of reasons - I detest removing glitter (and most peel-off base coats make my mani's pop right off within half a day of wearing them) and to keep the texture, you can't use top coat so I have to wait way too long before I can stamp. First world problems, eh?

The polishes I used for the gradient were OPI Solitaire (the silver-y white) and Pussy Galore (pink). They make a pretty combination, if I do say so myself.

The musical images are from a couple of plates. The accent nail is from Bundle Monster BM-411 and the other image is from Born Pretty BP-47. Both are stamped with Mundo de Unas Black and worn without top coat.

It's a good thing I actually liked this mani because I ended up having to wear it for days, until it was half chipped off. At least that saved me removing quite as much glitter, haha!
'Til next time...

View original
Save
1 love 1 save
Subscribe to Copycat Claws
Get updates delivered right to your inbox!

Will be used in accordance with our Terms of Service
More posts from Copycat Claws
Add a blog to Bloglovin’
Enter the full blog address (e.g. https://www.fashionsquad.com)
Contact support
We're working on your request. This will take just a minute...
Enter a valid email to continue