“Wait Roman, wait! I said I was sorry! That bitch made me do it!”

I pretended not to hear her crazy ass as I continued towards the car. I shook my head in disbelief as I recommenced dabbing the French wine from my fur coat. I didn’t need anyone to tell me that I slipped up by allowing her to come with me. But the more I tried to ignore the stupidity, the louder she became.

“So are you really doing this to me right now? Even after I slobbed you down in the VIP? I mean damn, I didn’t hit the bitch that hard!”

This was my own doing! Bringing Cenora Lee aka number three, to a social event like this was a big mistake. If she wasn’t the center of attention, things always got messy. Always. Seems that I would have learned something from the four seasons she was on Atlanta Housewives! But nooooooooo!!! I let her magical hips and enhanced tits convey me otherwise. Now I was suffering the consequences of wanting to have the finest girl at the party.

“Nigga, don’t you hear me talking to you? Don’t act like you don’t hear me, Roman!”

Paco, my driver for the night, stood with my door open. All I had to do was take three more steps to avoid any further headache. But when Cenora yelled out,

All the niceties went out the window. Instead of getting in the car, I handed Paco my jacket and walked back to where security was keeping the failed actress at bay. I looked around to see if there were any photographers while my ego took over.

“Cenora, you’re an ungrateful bitch! I tried to get you back into the limelight and dammit, you fucked it up! Not only did you blow your shot, you embarrassed me at my own fucking party!”

By this time, I was standing right in her face, All that bravado she had when I was walking away had left. Instead of making a smart comment, she mumbled

“You didn’t mean to? We’re not in fucking grade school! You’re a grown ass woman, Cenora! Adults don’t start throwing shit in public places! And they damn sure don’t hit the help with a champagne bottle!

She started sniffling as she gave me her pouty face.

“But, but, babe, that chick was all over you! What was I supposed to do? Aren’t you my man?”

“When did I ever say that I was your man?”

“You’re a bitch in my rotation”

“I mean, I like fucking you, but you’re a little too messy for me. You went from being number three to falling out of the top ten all together”

“You wanted to know the truth, so I told you. You were never my girl, just a friend. Nothing more, nothing less”

I saw the pain plastered all over her face, but I didn’t care. She had humiliated me for the last time.

“So you’re fucking all your friends?”

“Just the pretty ones dear”

“What about that trip to the Bahamas? That weekend by the lake? That shit meant nothing to you?”

“We had a good time and that’s all it was. Regardless, that doesn’t give you the right to throw champagne at me and pummel others because you made an assumption. Now I gotta pay the hospital bill of the bottle server because you thought she was trying to get next to me”

I turned around and headed towards the car.

“So you’re just gonna leave me here? How am I supposed to get home?”

I climbed into the Bentley truck and reclined in my seat. I looked out the window to see that my scolded lover wasn’t taking being left too kindly. Somehow, she broke past the guards and ran up to the door.

“Roman, you gonna pretend like you don’t know me nigga? After all the shit I’ve done for you?”

Before she could start to pound on the window, security whisked my jilted lady friend away.

“Get your hands off me! Roman? Roman!”

Cenora disappeared into the December night. I reached on the floor and grabbed my duffle bag. When I sat back up, Paco was staring at me through the rear view, smiling and shaking his head.

“I’m trying to figure that out now. Give me a sec”

I pulled out my phone and started to text my new number three. I knew it was a long shot, but I needed something to take the edge off. Cheyenne was the cure that I needed.

It wasn’t a minute before I received a response. She could meet me at our usual spot in about an hour. All she needed to do was secure a sitter. I went ahead and sent her one hundred dollars via cash app. I reached into my bag and pulled out some sticky green.

“My man, run me to the Westin on 210 Peachtree. I have another appointment”

“Will you need me to wait on you? It’s after midnight now and the label won’t pay for me to work past 3 AM”

“It’s all good. I have one of my cars there already”

“Not exactly. More like the parking garage across the street. There’s no way in hell I would pay those hotel parking fees!”

“Ahhhhh, okay. I wouldn’t haven’t thought of that.”

“I wish I would have thought like that tonight. I didn’t envision this evening turning out the way that it did. I knew ol’ girl was a little touched, but damn!”

“Well Mr. Ellis, she is beautiful. I could see any man trying to rehabilitate her, but only Jesus saves”

“You’re right, Paco. Now I’ve got to figure out how to keep from being the headline on the rumor report tomorrow. But first, I gotta get my mind right. If you don’t mind”

The young driver raised the partition as I cracked the windows. I lit the marijuana and allowed its fragrance to fill my lungs. Even though I was sitting back, I could feel myself floating down the highway. I was starting to feel free once again. Then, as if by magic, a song came on the radio

“They call me Back Door Santa

I make my runs about the break of day,

They call me Back Door Santa

I make my runs about the break of day,

I make all the little girls happy

While the boys are out to play”

I smiled to myself as I listened to Clarence Carter bellow over the airwaves. I found myself in a cloud reminiscing about the first time I heard the song. I had to be four or five riding in my daddy’s yellow Chevy Nova. I remembered he played the hell out of that song when it came up on the 8 track. He would sing the last chorus with all his might like he was James Brown! Instead of trailing off like the song, he would let out a screech like JB did on half of his songs. When I asked him why, he simply said,

“It gives the song that neckbone flavor!”

From that day, I spent most of my life trying to develop that “neckbone flavor”. It’s been seven years since my father passed and life really hasn’t been the same. Instead of Cenora, I wished he could have been here with me tonight. I wish he could have popped bottles to my success. He was the one who taught me how to play the drums and piano. If it weren’t for him, I wouldn’t be here now. It was nights like this that I missed pops the most.

Before a tear could be shed, Paco came over the speaker.

I put out my cigarette and eased my way out of the car.

“Good evening Mr. Ellis. Will this be an extended stay?”

“Just for the night fellas. Got an early flight to LA in the morning.”

After the attendant helped me with my coat, I went over to the driver’s door and took out some cash.

“For your service tonight”

“Please, take it. I appreciate your service”

“Thank you, Mr. Ellis. You have a good night, and please be careful”

I nodded my head as he drove away. I secured my bag and headed to the main desk where Oscar was waiting.

“Thank you Oscar. I have a guest coming in about thirty minutes. Please give her a room key. Her name is Cheyenne”

“Ahhhhhh, as you wish sir”

I started to scroll through my IG as I headed towards the elevator. As I stood there, I saw a familiar figure coming up behind me in the reflection of the gold doors.

“I guess you forgot about me, Mr. Super Producer” 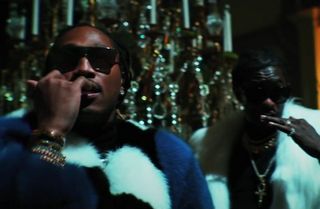