I could feel Zuri loosening her grip on me. She backed away as if she were startled. She shook her head, trying to make sense of it all.

“You stabbed Uncle Elijah? Your own father?”

Zuri gave me the side eye as if I were one of her children.

“Girl, you know I didn’t know! I didn’t know he abused you and Aunt Carol until now! I just assumed that he ran women like my father did”

“I wish it would have been that simple, cuz. Your uncle Elijah was a violent man. Unfortunate for me, on that day, I finally had enough. Several years of hearing her screams in the middle of the night. Too many times being told to go back into my room when he was punishing her. I couldn’t continue to sit idly by and watch my mother get hurt. It was like she refused to fight.

“Is that the real reason she missed your championship game?”

“Yeah. He beat her up pretty good while I was at practice. I came back home that night and both of her eyes were black. Lip busted. She couldn’t be seen like that. She was more concerned about what others would say about him”

My confused cousin continued to shake her head as she headed for the stairs.

“I need to have a seat for all of this. Now tell me, what happened to make you wanna kill your own father?”

“For the record, I didn’t want to kill him. I just wanted him to stop. Elijah Brock walked around here like a ticking time bomb and no one knew when he would go off! That Sunday night was no different. Me and mommy were watching America’s Funniest Home Videos. Elijah was in his bedroom sleeping”

“Uncle Elijah had his own bedroom?”

“Yes, but that’s beside the point. So the next thing I know, Elijah rushed into the den and started throwing haymakers! Momma wailed like, like a tormented slave! The power in her screams made me feel like her soul was being ripped out!”

I paused. My attempt at keeping this story light was starting to fail. I could hear that same heart piercing cry so clearly in my ear that it was deafening. My hands started to shake and I couldn’t make them stop. It didn’t help that I was standing in the same area that it all took place. Zuri came to where I was and held my hand. I continued the play by play.

“I remember, we were over there in the corner where the couch used to be. Momma was folded up, her knees touching her chest as he continued his assault. I attempted to pull him off, but he pushed me. I tried again, hitting him on his back, begging him to let momma go. Instead of hearing my plea, he reached back and slapped me, as if I was a some common stranger”

“I picked myself up and ran to the kitchen. I grabbed the biggest knife I could find. Then, I darted back in and stabbed him in the leg!”

“Hell yeah I was scared! But I had so much adrenaline running through me! I just wanted him to stop. I remember him bellowing in pain as he took the knife out”

“I stood there, expecting mommy to get her licks in as Elijah was riddled with pain. Instead of taking the knife and finishing the job, she went to the hall closet and grabbed towels to stop the bleeding. The same man that had just bloodied her face, again, she was now trying to clean his wound!”

“Yes! So I’m looking at mom wondering what was going on? After he stopped his belly aching, Elijah Brock yelled at me and said:

“Get the fuck out of my goddamn house!”

I let Zuri’s hand go and walked over to the window sill, staring at the kids as they passed by. After a few moments, I turned back to Zuri and finished my story.

“Mom came over to me and said that it would be best if I went to live with you and Aunt Vicky. Zuri, that shit hurt me more than you’ll ever know. I was the one that defended her and yet, I was the one forced to leave. That’s why I don’t like to come back to Germantown. And when I do, it’s normally not for long. I be damned if I stay overnight!”

“Wow Naomi! That explains why you never wanted to visit your parents after you left the house. My question is why did you wait until now to tell me? When you came to live with us, I always asked you why? You would always change the subject, stating that my mother needed your help. But I was already a preteen and you? You were barely home yourself!’

“In all honesty, I didn’t want to disrespect my mom. She was the one getting battered by her husband. I wasn’t going to tell anyone that Victoria Brock was a weak woman. That she was being broken ever so often. I didn’t want social services in our business. I wasn’t trying to be a teenager in foster care. I damn sure didn’t want the neighborhood thinking that I was as soft as my moms either! So I never talked about what went on after Albert died”

“You could have told me?”

“Zuri, I love you, but there was nothing you could have done to help. You were only eleven and I had several months to go before I graduated. My focus was keeping my GPA up enough so that I could get that full ride out of here”

“And you did! Despite everything you went through, you graduated with honors. Aunt Carol went on and on about you and your full scholarship to Tennessee. Now I know why”

“That’s that shit Elijah Brock put in me. I will give him that. I didn’t quit. I finished the drill”

“So Naomi, did you ever get any counseling after that? I know you kept it pushing, but that’s quite an ordeal to try to resolve on your own?”

“Actually I did. After I obtained my Master’s, I went to counseling with that smugly baby daddy of mine. After we split, I went back to therapy for about a year. It helped”

“Are you trying to analyze me, Preacher Cousin?”

“Naomi, I counsel quite a few parishioners before they tie the knot. Some I have to refer to outside counsel because the issues presented need pharmaceutical assistance. There are traumas that need more than holy oil to treat. So I’ll ask you again, are you sure that you’re good?”

Before I could begin my retort, something held my tongue. For some reason, I was forced to stand there and think about the situation. I had never been married because I was afraid that my husband would end up like Elijah. Any man who disagreed with my logic, I dismissed them. I was latching onto unavailable and unworthy guys so that I wouldn’t have to deal with all of this mess. But lowkey, being in a healthy relationship is all I’ve ever wanted. And maybe Hamilton was who God sent me, but I couldn’t see it. That square actually wanted to help me through my shit! Damn!

“Zuri, I haven’t been good for a while now. I’m just maintaining”

“So any plans on how to go about living again?”

“Cuz, I don’t know how to. I’ve been pretending to be this renaissance, independent chick who has it going on. Fucking all these unavailable dudes and being an asshole to the good ones. I’m beyond a mess!”

“Hey! What the hell? I thought you were supposed to give me some good counseling or something like that Reverend Zuri?

“You have Cousin Zuri right now and I’m just happy that you admitted out loud that you have some issues. I see so many sisters go through this and they refuse to get help. They come to the altar, sprawling all over the carpet, thinking that a quick jerk is gonna atone for all the years of psychological damage”

“But isn’t God supposed to be able to heal you? I mean, at least that’s what I see on television?”

“Look Naomi. I take my relationship with the Father seriously. God can heal. Most times that healing process comes through providing resources. Don’t think it strange that your company may all of a sudden begin to offer free or discounted counseling. That’s God working on your behalf. We just don’t wanna listen”

“But what about coming to the church? You all offer free counseling right?”

“Yes, we do. But honestly, some people don’t want to come to my office for help because there are others that work in the church that may tell your business”

I nodded in agreement. In her own way, Zuri ministered to me by just listening. I appreciated that.

“Well, I think it’s time to go now. I’m sure mom and Aunt Vicky are wondering where we are”

“But I thought you had left something in here?”

“Girl, I was just trying not to have this conversation. But we did, and it was good”

We shared another laugh as we walked out the door for the last time. As we pulled off, I looked back at the house. The sunset made me think back to a happier time when Albert was alive. When we would all sit on the steps after supper eating butter pecan ice cream. Just taking in the day as if it were our last. Enjoying each other’s company without saying a word. Watching the kids play basketball while Elijah asked mom for seconds. Then Elijah would sit me on his knee and tell me I was his princess. That meant the world to me . . .

Written by the Wednesday Gentleman 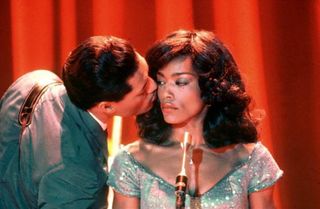