When we finally got around to making over our master bedroom a couple of months ago we decided to switch to a king-sized bed and we moved our other queen sized bed into the guest bedroom and slept with our new mattresses on the floor for quite a while so we just kind of used the floor as a nightstand. =) Then we ordered a bed from Ballard Design (which I will show you lots of pictures of next week) and once it arrived we needed to figure out some kind of nightstand option. We didn't want to spend very much money but still needed something substantial to look proportionate with the size of the bed. I hunted and hunted but had trouble finding something the right size that wasn't way more than I wanted to spend. I ended up giving up on finding something and decided to go with the the inexpensive IKEA Tarva dresser and customize it to look a little bit more our style. Even though technically it is a dresser, it is the perfect size nightstand for our room. Here are a few photos of the end result and then if you scroll down I will show you what it looked like when we started and how we transformed it. (I think they look a little more distressed in these photos than they do to me in real life for some reason).

Okay, so here is what is what we were working with: The first part of the project was putting together the Tarva. And I am not going to lie. I am not a fan of putting together IKEA furniture. I hate it. And I would also add I probably am least impressed with this piece as far as IKEA pieces go. I actually am planning on writing a post in the near future about all of the different IKEA items we have purchased over the years and what we have been happy with and what we would recommend (because there are several pieces I absolutely love) and what items I have not been as thrilled with. Anyway, because of the drawers this piece took a little while and it's a little bit on the flimsy side. Once I got to the part where you add the legs I skipped that step. The legs on it would have made it a little taller than I wanted next to the bed plus I thought it would look a little better with some little bun feet. In retrospect I wish I had gone with a larger size and may switch them out at some point but you don't really notice them once you are further back so I may never get around to it. To add the bun feet I first attached these:

and then just screwed the feet in:

Then I used liquid nails and added some thin pieces of wood to sort of frame out each drawer. I used clamps to hold them in place until the liquid nails dried. First I did the long pieces: 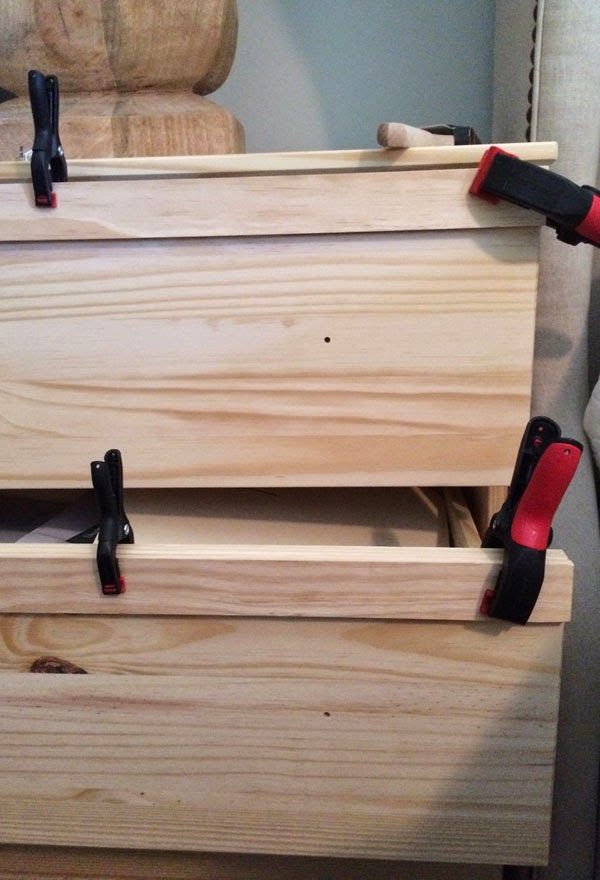 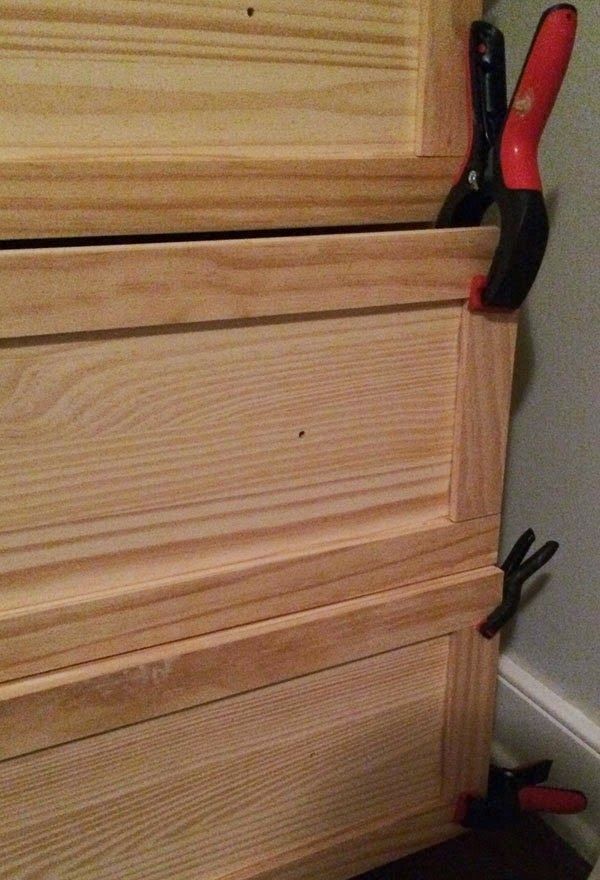 So here is what it looked like at that point. Not perfect and nothing too fancy but definitely a little bit more grown up feeling than the original piece.

Next I painted it. I just used some sample sized colors from Benjamin Moore. First I coated it with Duxbury Gray. I haven't sealed mine yet but at some point will probably use some Annie Sloan Clear Wax on them.

Lola helped me with the sides. =)

The Duxbury Gray is on the left. It was a little darker than I wanted so then I added some Sea Haze that I had an old sample from ages ago.

While the Duxbury Gray was still wet I brushed on the Sea Haze:

I wanted the finish to have kind of a rough aged look (they look a lot more distressed in these photos than they do in real life though):

Once that was dry I added some extra holes for the hardware and then found these Martha Stewart Cup Pulls at Home Depot. I couldn't find any that had kind of an antique gold or antique brass look to them so I just bought these seeing how I at least liked the shape of them.

This is what they looked like to start with (If you are looking for this type of finish I would recommend these - they were quite nice - it just wasn't the color I was looking for to go with the rest of our master bedroom):

So I sprayed them with this gold color:

And then gave them a really light misting of an oil rubbed bronze spray too and then after that rubbed some Annie Sloan Dark wax over real quickly then wiped it off. You can see in the two below the one on the left was just with spray paint and the one on the right has the wax. It helps give them more of an aged look.

And then I just screwed those on and there you have it. So, it definitely took a decent amount of time to do two of these but all in all it was a pretty easy project! 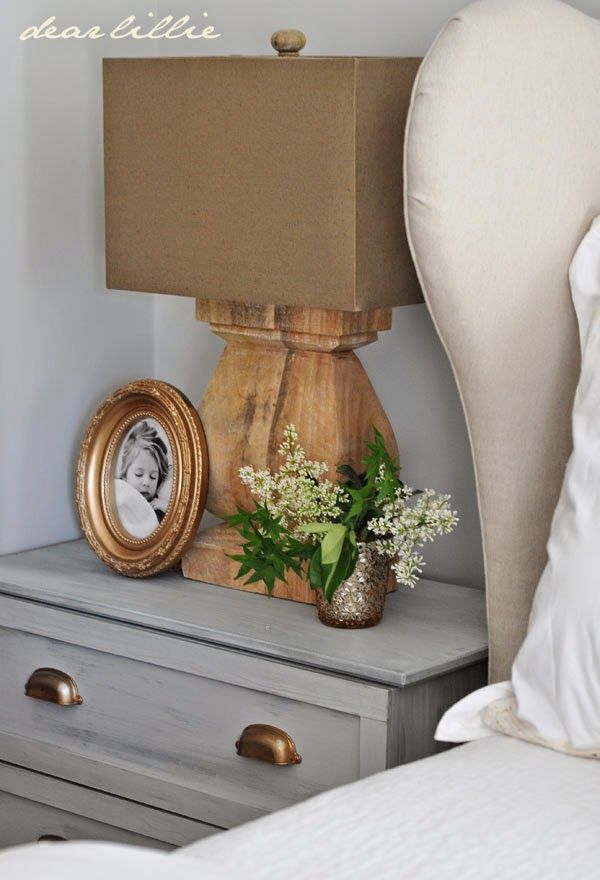 Wallcolor - Moonshine by Benjamin Moore in Matte
Trim - Simply White by Benjamin Moore in Semi-gloss
Nightstand - Made over from a Tarva dresser from IKEA and painted first in Duxbury Gray and then Sea Haze
Pulls - Martha Stewart from Home Depot (spray painted gold and aged with Annie Sloan Dark Wax)
Lamps - HomeGoods
Gold Oval Frame - have had for years
Little Gold Vase - was originally a candle from Target, once it finished we now use it as a vase
Bed - Ballard Design
Euro Shams and Regular Shams - Ballard Design
Coverlet and little pillow in front - IKEA
Drapery Panels - IKEA
Pitcher being used as vase - gift (from Spring Mill)
H - gift

I hope you all have a fabulous Tuesday! I'll be back some photos from Jason's house and a new product later this week!

View original
Save
23 loves 3 saves
Subscribe to Dear Lillie
Get updates delivered right to your inbox!

Will be used in accordance with our Terms of Service
More posts from Dear Lillie
Add a blog to Bloglovin’
Enter the full blog address (e.g. https://www.fashionsquad.com)
Contact support
We're working on your request. This will take just a minute...
Enter a valid email to continue