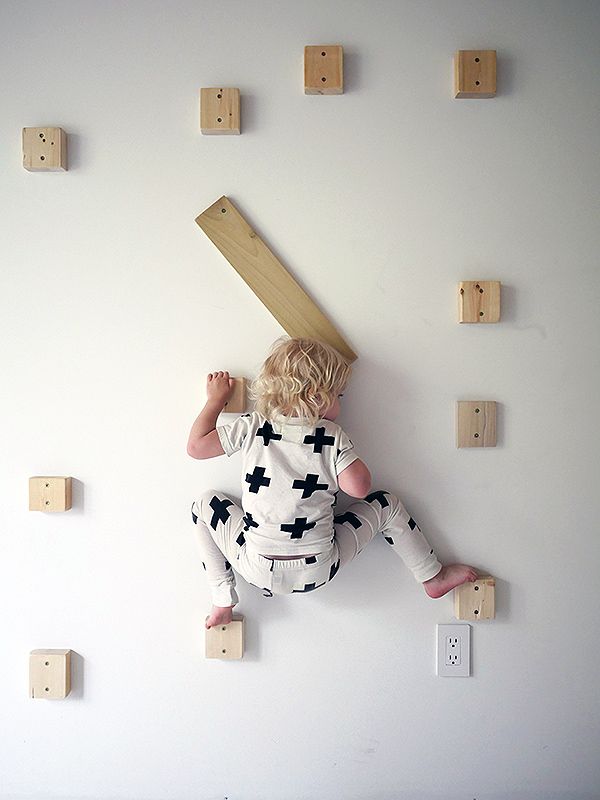 The text came from Ken while I was on the west coast: “Can I put the rock climbing wall in our bedroom?”

The rock climbing wall, I’d thought, was a project for later, but I’ve also never been good at predicting the milestones of a child. When Bee received her big girl room, it wasn’t until a three hour nap strike that I realized, Oh, of course. Yes, she can get out of her bed now. She can decide not to nap. The power is hers. This makes sense.

(Surely I’m not the only one parenting on the fly over here? Surely there is someone else who has no whits about how to raise these beings, who can only hope for more trial than error?)

And so, the time for rock climbing had begun. The energy of a nearly 3-year-old is unmatched, and Ken had a few hours at his disposal, and so, there they were, mounting onto the wall like spiders on a spout. The original plan had been to put the wall in her room, but our room has higher ceilings and more supervision, both of which seemed like necessities for a toddler on the go.

As most good ideas in our family are, the wall was Ken’s creation, and it was a true hit. Bee is enamored, climbing up and down and all around, growing mini Tarzan calves. And it wasn’t until I posted this on Instagram that I realized many of you loved it almost as much, and so, as promised, here’s the tutorial (if you can call it that!):

The post Our DIY Rock Climbing Wall appeared first on Design For Mankind.

View original
Save
7 loves 8 saves
Subscribe to Design For Mankind
Get updates delivered right to your inbox!

Will be used in accordance with our Terms of Service
More posts from Design For Mankind
Add a blog to Bloglovin’
Enter the full blog address (e.g. https://www.fashionsquad.com)
Contact support
We're working on your request. This will take just a minute...
Enter a valid email to continue