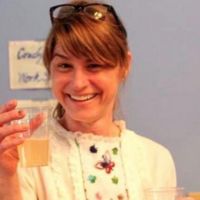 In the Kitchen With: Frankie Unsworth’s Ice Cream Terrine

Food stylist and writer Frankie Unsworth shares my passion for frozen desserts, and one in particular, the Viennetta. A Viennetta is a commercially made ice cream dessert, but Frankie makes her own type of Viennetta as a semifreddo, pressing berries into her ice cream layers in between the thin shards of dark chocolate. It requires no machines and is easy to make. She calls her dessert a Frozen Berry and Chocolate Terrine. Even more than the scattered frozen berries, the crunch of the chocolate in each bite is, in my opinion, the biggest draw! —Kristina

Why Frankie loves this recipe: I wish I could take credit for the genius that is the Viennetta, but this glorious frozen swirled ice cream with its delicate layers of crisp chocolate was born two years before I even came into this world, and now enjoys a quasi cult status among us 80s kids. I’d like to say it’s a guilty pleasure of mine, but in reality I’ve never felt an ounce of guilt when tucking into a slice of this groundbreaking invention. My homemade homage to this deep-freeze delicacy is studded with berries for extra impact and is even more of a showstopper for your summer table when accompanied by an extra tumble of the fruit upon serving.

1. Place the chocolate in a heatproof bowl and place over a pan of simmering water. Make sure the bowl does not touch the water. Line two medium baking trays (ideally that will just fit into your fridge) with baking paper, and once the chocolate has melted, spread it out very thinly across the paper using an offset spatula. Place in the fridge to harden.

2. While the chocolate is setting, place the eggs, extra yolks, vanilla and sugar in another large heatproof bowl. Place the bowl over the pan of simmering water, ensuring it does not touch the water, and whisk continuously for 6–8 minutes or until the mixture becomes thick and pale. If you have a handheld electric whisk, opt for that, otherwise you are going to need some elbow grease and a little patience — but trust me, it’s worth it! When the mixture looks pale and thick and your whisk leaves a trail of ribbons on the surface of the mixture when you lift it up, you are ready. Remove from the heat and allow to cool slightly.

3. Whip the cream until stiff peaks form. Lightly fold the cream through the cooled egg mixture one spoonful at a time fold until well combined, then stir through the yogurt.

4. Line the 2-lb loaf tin with cling film, leaving approximately three inches (7.5 centimeters) of overhang on both long sides. Pour about ¼ of the egg mixture into the base of the loaf tin. Press 1/2 of the fruits into the mixture. Break the chocolate into rough shards and place over the berries. Add another thin shard of chocolate across the top, then spread a spoonful of egg mixture over the chocolate, then add another shard of chocolate (the idea is that each layer of chocolate has a small amount of ice cream running between it). Repeat this twice more. Then pour another ½ of the remaining egg mixture over the top, press in the remaining fruits, then repeat the chocolate shard layering process, spreading a little of the egg mixture between the chocolate until your tin is full and the chocolate is used up. You can be pretty rough about this and layer it a bit haphazardly, it will still taste great. Fold over the overhanging cling film to cover the surface of the viennetta and freeze for 6 hours or overnight.

5. When ready to serve, remove from freezer, and peel away the cling film from the surface of the underside of the loaf. Place overturned on a serving plate, pull the loaf tin off and peel away the remaining clingfilm. Scatter extra fruits over top and around, and serve in thick slices on a hot summer’s day.

About Frankie: Frankie Unsworth is a London-based food stylist and writer. After leaving university, she worked as a writer for an Italian food magazine, before studying Patisserie at Le Cordon Bleu in Paris, where she lived for a few years. It was here that she met Rachel Khoo, for whom she went on to style books and work as a home economist on her TV shows based in Paris, London and Melbourne. She has styled the food for numerous best-selling cookbooks and has an unhealthy obsession for buying props. You can find Frankie on Twitter and on Instagram.

View original
This post is tagged in:
Save
113 loves 57 saves
Subscribe to Design*Sponge
Get updates delivered right to your inbox!