I really had hoped to share my Halloween nail art on actual Halloween, but I ended up doing a much more intricate design than originally planned and ran out of time to put the post together. Crossing fingers you'll agree it's better late than never, though, because here are my Halloween ghosts...

I mentioned I'd planned a much simpler look for Halloween, but that was before I saw these stunning transfers done by More Nail Polish (I almost hate for you to look at hers, though--the image she reproduced looks so amazing, and I love her temporary tattoo paper technique). Working freehand, I'd say my ghosts were kind of a Monet (Clueless, 1995). Up close they're all stroke-y and messy, but at arm's length they really did look all floaty and wispy and spooky and awesome! 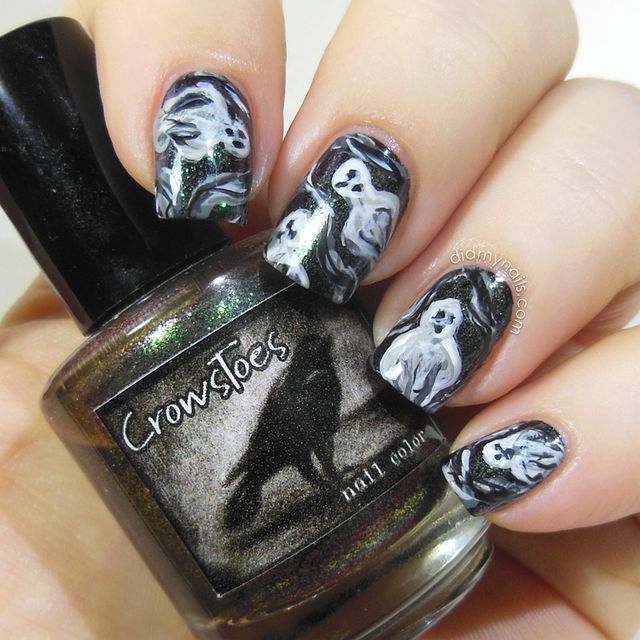 I started with a couple coats of CrowsToes Season of the Witch layered over Orly Liquid Vinyl (black). The ghosts and wisps obscure SotW's fantastic duo shift, but I figured that would happen--I just couldn't resist the name/holiday combo.

Over the polish I used acrylic paint in approximately 50 shades of grey (give or take 43 shades). I tried to get them all watery and blendy but was only partially successful at that. I finally hit the point where it felt like it was time to leave it alone, rather than gunge it up by doing too much. All in all, I don't know if they were a total success, but they were by no means a failure either. They were definitely super fun to paint, and I really enjoyed stretching myself a little and trying something new!

View original
Save
Subscribe to Did My Nails
Get updates delivered right to your inbox!

Will be used in accordance with our Terms of Service
More posts from Did My Nails
Add a blog to Bloglovin’
Enter the full blog address (e.g. https://www.fashionsquad.com)
Contact support
We're working on your request. This will take just a minute...
Enter a valid email to continue