Join us to celebrate the release of Charm Wars, a new YA dystopian/fantasy novel from Dan Lutts, and the first installment of the Charm Wars series – out now! 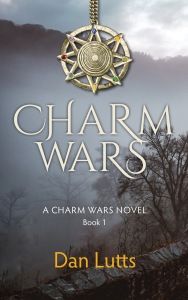 Welcome to Caldon, a land of mages and magic, where the noblesse possess massive political and magical power and destroy anyone who threatens the noblesse way of life—especially the commoners.

Rill Larkin, the son of a commoner blacksmith, has high ambitions. To be a mage, join the exalted ranks of the ruling noblesse, and establish his own noblesse family. Defying both the system and his family, Rill becomes the apprentice of Deuth Estati, a powerful archmage. But appearances deceive. As training progresses, Rill learns of decades-long secrets and manipulations that threaten his dream. And Deuth might not be as benevolent as Rill thought.

Alyse Dejune despises magic, even if she does belong to one of the oldest and most powerful noblesse families in Caldon. The deceits and treacheries of noblesse life and the loveless marriage alliances among the noblesse families disgust her. Her family however has high expectations: that she fulfill her role as a noblesse girl by marrying Troy Estati, an arrogant, selfish noblesse boy she does not love. And Alyse harbors a secret—the potential to become one of the most powerful mages in generations and wield forbidden magic—that, if revealed, could mean her death.

In this deadly game of ever-shifting alliances, where the state wages perpetual war against an ancient enemy, Rill and Alyse are thrown together in a land where magic is failing. And as greedy noblesse families raid surrounding family compounds for powerful charms, Rill and Alyse are left standing at a terrible crossroads.

“If a charm seeker did open this tomb, why did she take the charm from that one Old Mage but not his staff? And why did she leave all the other charms and staffs behind? I wonder—”

Rill and Jedd whirled around.

Just inside the entrance stood a skinny, middle-aged man of medium height. His gray tunic and tan pants were dirty and patched and his boots old and scuffed. Oily, unkempt hair framed his pockmarked face. In his right hand, he held a staff. The light from Rill’s and Jedd’s torches danced shadows across his face, making his malevolent grin appear even more evil.

A blacksmith’s vise clamped Rill’s chest making it hard for him to breathe. A rohan! A backwatcher or protector—either a mage or a bladeswoman or bladesman—who had been expelled by a noblesse matriarch for breaking her oath to serve and protect the matriarch’s family. An outcast from society no other noblesse First or Lesser Family would touch. A woman or man who was lower even than the criminals, dagger women, and prostitutes living in Caldon’s most dangerous neighborhood, The Slums.

Rill’s gaze fastened on the rohan’s left hand that clutched something beneath his grimy tunic.

Rill eyed the staff, his stomach paining him. The rohan had activated his charm. All he had to do now was point the staff at a target and cast a spell. Rill’s gaze slid to Jedd, who appeared as rigid as a marble statue.

With exaggerated slowness, the rohan aimed the staff at the gap between Rill and Jedd, then deliberately moved it from one to the other. His lips drew up into a cruel smile, making Rill feel like a mouse being toyed with by a cat.

Rill choked on a lump of regret. Why didn’t I listen to Jedd and leave the coffins alone? We could of been partway home by now. I could of been a mage. But now I never will be.

Slowly and deliberately, the rohan inhaled a mouthful of air and said, “Luco!”

Rill’s frightened breath blended with Jedd’s when the crystal burst into life, and white mage light flooded the tomb.

The rohan laughed as if he’d just watched a first-rate comedy routine as he stepped several paces forward. “Scared of a little light, boys?”

Rill’s gaze jumped to Jedd. His cousin was glowering at the man, his hands balled into fists.

The rohan smirked at Jedd.

Slowly, keeping his eyes on the rohan, Rill moved his hand toward his sword’s brown leather grip.

The rohan must have had invisible eyes in the side of his head. With a chuckle, he casually pointed the staff at Rill. “Foolish boy. I can kill you before your sword’s half out of its scabbard.”

Rill let his hand drop to his side.

“You know we ain’t,” Rill said through clenched teeth.

The rohan stepped forward a few more paces until only a staff’s length separated them. “When I came across your well-fed and groomed horses a while ago, I thought that maybe their owners came from good families. Families with money. So I went looking for you. My goodness, you weren’t hard to find. Not with all that racket you made in here with the cougar. Boys with horses and swords. And purses hanging from their belts.” His gaze riveted itself to Rill. “And with such interesting things inside.”

Rill’s heart froze into a lump of ice as he forced himself to return the rohan’s stare. He saw me take the charm.

The rohan flashed them both an evil smile. “So I said to myself, ‘Self, I bet those naughty little boys are carrying some nice shiny gildas in their purses. Or maybe even a goldie.’ You got any?”

“Why don’t you come closer and find out?” Rill said. He’d tried to sound cocky, but his voice broke halfway through the question.

The rohan grinned, obviously enjoying himself. He pointed the staff at Rill. “Naughty boy. I hope you don’t melt.”

He had only moments to live. 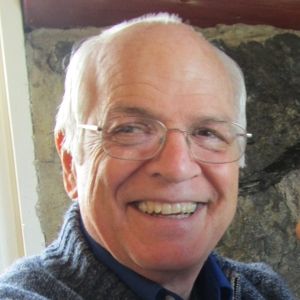 Dan Lutts, the author of Charm Wars, was brought up in Quincy, Massachusetts, and began addictively reading Batman, Superman, and Wonder Woman comic books at an early age, much to his mother’s distress. In junior high school, he switched to reading science fiction novels. While in high school and college, he wrote science fiction short stories.

Dan taught history and archaeology in high school for ten years. After being laid off because of budget cuts, he used his love of writing to retrain and became a software technical editor and writer. He worked for several computer companies, taught technical writing at the college level, and worked as a freelance writer. Now, combining his love of history and writing, he works at a World War II museum doing research and writing.

Dan loves to read and has varied tastes, including Young Adult, historical fiction, mysteries, 18th-century sea epics, and history. He especially enjoys Young Adult fiction and decided to try his hand at it. Charm Wars, Dan’s first novel, is the result.

Dan lives in rural Maine with his wife, Lisa. When he’s not working or writing, Dan can be found reading, making and shooting medieval arrows with his longbow, or playing with his two dogs and two cats—all rescue animals.