Before & After Ikea Tarva Dresser DIY 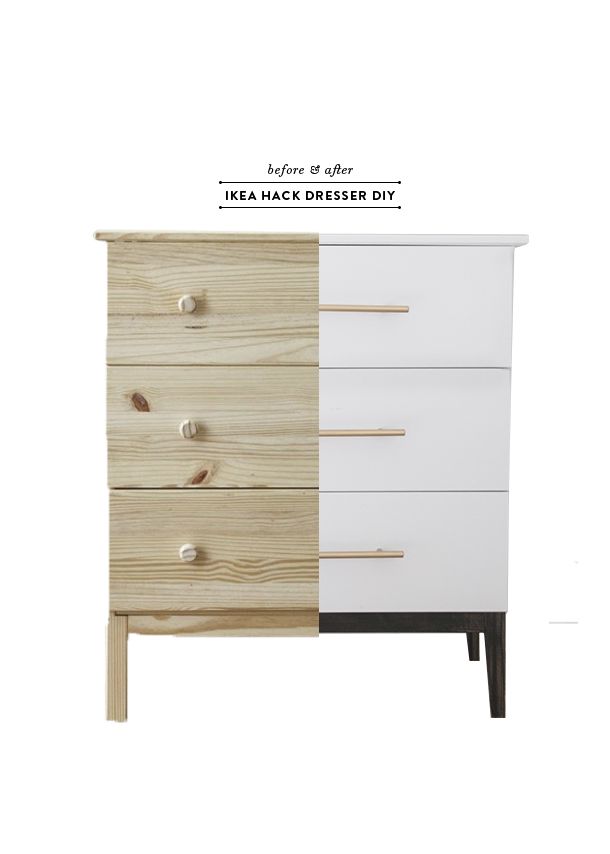 Happy Monday, friends! I hope you had a fabulous weekend! We managed to accomplish a ton of stuff and actually get a little relaxing in as well. One of the main projects I worked on was a revamp of an Ikea Tarva dresser that Id purchased as an alternative to the mid century dresser that I was hoping to find for the nursery.

I began to realize that although I wanted a good vintage piece, I wasn’t willing to pay the price for one at this moment. Instead, I decided that an Ikea hack with a slight mid century flair would work well. Especially considering that – all in – this dresser cost me under $100.

And not only was it extremely inexpensive, it is great looking and matches the same two tone esthetic as the crib I’m getting and the armoire that I repainted a couple weeks ago.

It was simple enough as well. I started by building the general frame of the dresser, then painting it all over with a bare wood primer. Then, painting the top portion with a semi-gloss white paint using a foam roller gave the dresser a smooth finish. We took the square legs of the dresser and cut them on angles, inspired by Sarah Sherman Samuel’s ikea hack of the same dresser. The angled legs give the dresser a much more distinctive look.

The two tone wood combined with the angled legs and gold bar hardware give the entire dresser a hugely different look. I am so excited to get this into the room with some of the other pieces we’ve been collecting… a few of which I am so excited to show you on Wednesday!

So, I know that this is a different direction than my initial idea, but I really like where I’ve landed with this project. What are your thoughts? Have you ever done an Ikea hack?

p.s. I despise the word ‘hack’. But there really isn’t another good word for this, is there? Transformation is just too damn long.

Will be used in accordance with our Terms of Service
More posts from Earnest Home co.
Add a blog to Bloglovin’
Enter the full blog address (e.g. https://www.fashionsquad.com)
Contact support
We're working on your request. This will take just a minute...
Enter a valid email to continue