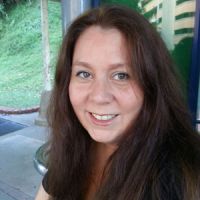 I’ve lived in Singapore for three years as of next week and it took me almost that long to visit Thailand. It wasn’t because I didn’t want to go. I just hadn’t made time for it yet. That finally changed at the end of 2015 when Jeremy, my father and I traveled to Singapore from L.A. by way of Bangkok and took a week out to enjoy the sights.

Wat Yannawa in Bangkok dates back to the Ayuthaya period, but this onsite Chinese junk-shaped chedi was constructed in the 1800s. Believing that Chinese junks were disappearing from use, King Rama III had this chedi built for future generations to admire the Chinese-style junk.

I had mixed feelings about Bangkok. I enjoyed seeing the beautiful temples, the ancient ruins of Ayutthaya kingdom (post coming soon) and the modern city that Bangkok is today. However, I feel I picked the wrong week to go as the crowds were just out of control. I also felt, for the first time, that some of the other travelers were inconsiderate to my father in a way that was potentially dangerous for him. I have written before about traveling with my father (here and here). He is elderly and though healthy in other regards, he walks quite slowly and with a limp. In Bangkok, we encountered travelers who actually physically pushed my father out of the way at sights or when walking down the street. This happened almost every day and no one apologized for causing an elderly man to stumble and lose his balance. I don’t blame Bangkok for this behavior, and these were not Thai behaving this way, but it did make the trip frustrating for us at times. For his part, my dad was very happy with the trip despite the behavior of some of the people around him, but we will be careful not to take him somewhere so crowded in the future.

The other downside I saw was just how much tourism had taken over specific sights. I had dreamed of visiting a floating market for many years, after seeing them showcased on cooking shows on television. However, pretty much every cab driver and tuk tuk driver we encountered pitched us a trip to the floating market. One guy even had a video of the market to show us. Another had a series of postcards. With this many people pushing a visit to the floating market on us, we knew that could only mean one thing: these people were getting a kickback. So we did a little more reading on the floating markets and while we did find some positive reviews, we saw many more warning against the tourist trap the markets have become. In the end, we chose not to visit one. It seemed to us that the markets were now mostly for foreigners instead of for locals and that isn’t what we were expecting so we took a pass rather than be disappointed. Maybe we missed out, but we don’t regret our choice.

Having said that, there was plenty we enjoyed about Bangkok. Aside from our day trip to Ayutthaya and Bang Pa-In Royal Palace, we kept our itinerary fairly loose, which is not how I usually roll. We spent our days wandering through different neighborhoods and around to the temples and just enjoying our limited time with my dad. The Grand Palace was extremely crowded and required patience, but it is one of the most beautiful places I’ve visited. Everywhere you look there are exquisite statues, mosaics and those adorable guardians. Wat Po is just as attractive though smaller in size, but it has the famous reclining Buddha. We did have fun, and of course we enjoyed the food, but I don’t think I’d return to Bangkok during New Year’s week again. What follows are some of my favorite photos from the trip.

Despite the August 2015 bombing that killed 20 and injured 125, the Erewan shrine is crowded day and night with people paying respects and making offerings.

Wat Hua Lamphung is a busy local’s temple that was next door to our hotel.

Exterior of the Emerald Buddha temple at the Grand Palace.

Guardians at the Grand Palace

Touch up job at the Grand Palace.

We climbed 344 steps up and around to reach the summit of Wat Saket aka the Golden Mount.

Wat Traimit, the Temple of the Golden Buddha

Jim Thompson’s House- Jim Thompson revitalized the Thai silk trade. His home is made of six traditional Thai houses, built together to form one.

Chatuchak is a giant weekend market, selling furniture, food, housewares, art, clothes, souvenirs, and much more. We opted to visit here after we ruled out the floating market.

OrTorKor is a wet market with food stalls, located next to Chatuchak market.

View original
Save
Subscribe to East-West Love Story
Get updates delivered right to your inbox!

Will be used in accordance with our Terms of Service
More posts from East-West Love Story
Add a blog to Bloglovin’
Enter the full blog address (e.g. https://www.fashionsquad.com)
Contact support
We're working on your request. This will take just a minute...
Enter a valid email to continue