12 Ways to Take Brownies Where They've Never Been Before

Where do your brownie loyalties lie? Are you Team Fudgy, Team Cakey, or Team In-Between-y?

I'm a fudgy-as-a-truffle gal myself (Alice Medrich's Best Cocoa Brownies are my old faithful, preferably straight from the freezer)—but today, we're not here to discuss that age-old question.

Instead, we're here to take you brownie purists and turn you into brownie hedonists!!!! eccentrics. Your ordinary brownies might be extraordinarily good, but consider these tweaks—in the form of swirls, sprinkles, drops, and swooshes (smears, if you prefer)—for when you want to give your brownie a night on the town, complete with facial glitter (that's still a thing, right?) and a thick coat of mascara. 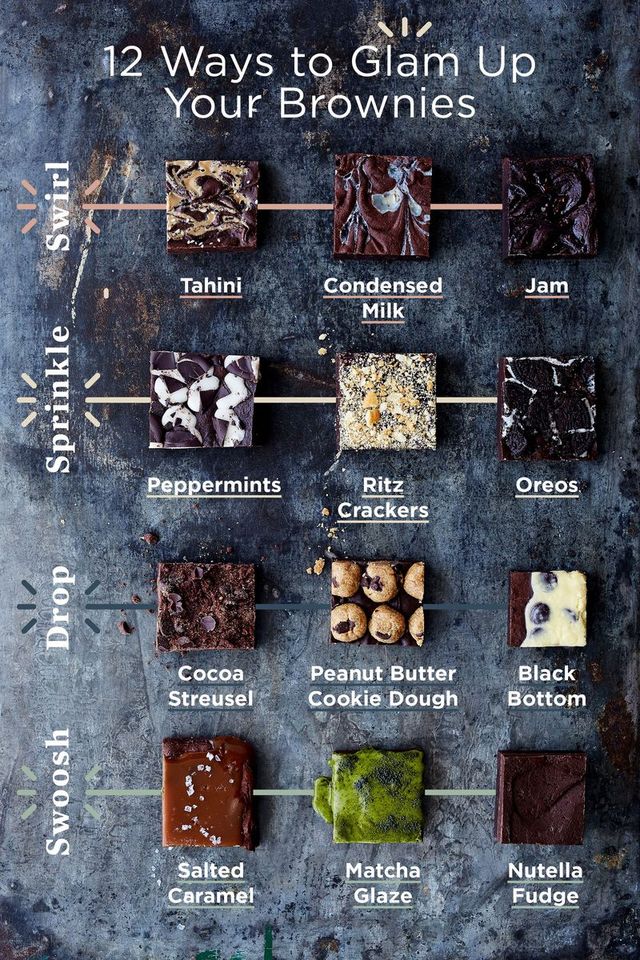 But also, when you want to clean-out your pantry. Dump out that bag of pretzels, smash them up, and mix them into brownie batter. Or put those Marcona almonds you bought for some thing at some time to rest by mixing them into a caramel sauce and drizzling it over the hot-from-the-oven pan.

The Magic of Marbling by Alice Medrich

Rice Pudding with Sesame Crumble and Blueberries by Sarah Jampel

For these applications, you're working with the pan of brownies after it's come out of the oven.

How to Make Your Caramel 100x More Exciting: Replace Crea... by Sarah Jampel

And just a few more ideas from the Brownie Queen herself...

What's your favorite way to dress up a brownie? Or are you all about keeping it plain and simple? Tell us in the comments below.

View original
This post is tagged in:
Save
23 loves 31 saves
Subscribe to Food52
Get updates delivered right to your inbox!

Will be used in accordance with our Terms of Service
More posts from Food52
Add a blog to Bloglovin’
Enter the full blog address (e.g. https://www.fashionsquad.com)
Contact support
We're working on your request. This will take just a minute...
Enter a valid email to continue