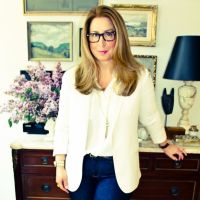 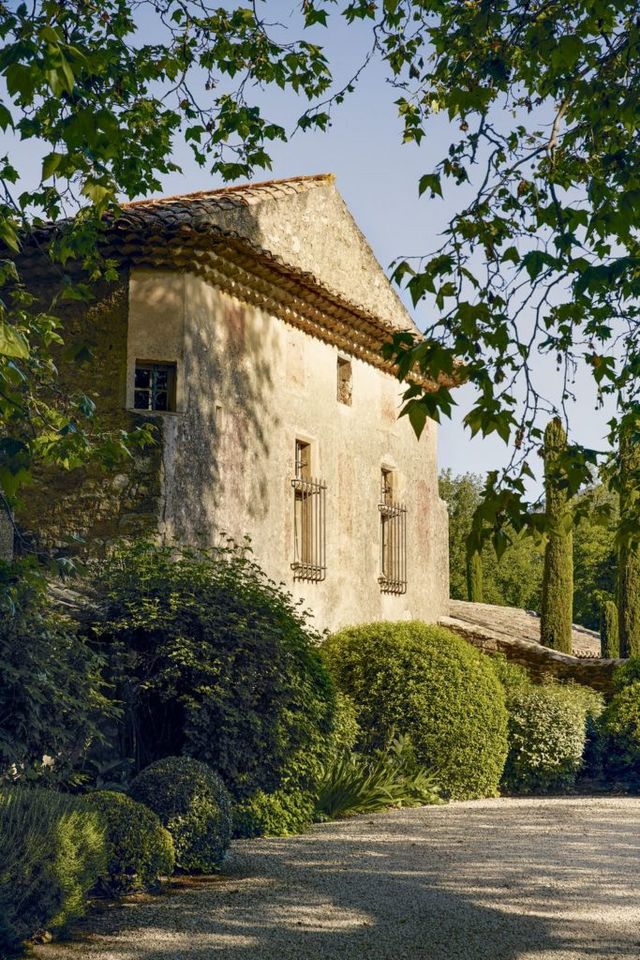 It’s raining in New York so it feels like the perfect time to escape virtually to Provence to take a look at Les Ramades, the Provence home of Betty and François Catroux. It was on the market last year for $11.5 Million because François wanted to be near the sea and had bought a place near Nice. It’s a shame that he is no longer around to enjoy his new home.

François bought it in 1990, when it was a ruin with dirt floors, from three old French sisters whose greatest contribution to it was the addition of two somewhat modern bathrooms. “Given that my métier is designing homes, it didn’t interest me to buy something already done,” he explains. The house, he says, is “not a farm and not a manor, but rather something particular to the south of France.” Over the years, he’s heard that it was once a convent, and also that it belonged to a wealthy family—as evidenced by the multiple layers of génoises, red tile eaves. “A normal person would have one layer, a wealthy person two,” he says. “Ours has three, so we assume it belonged to someone important.” 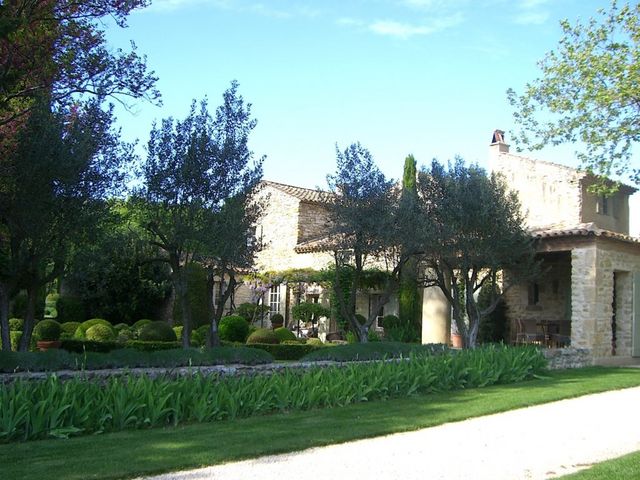 “It was sort of half a ruin,” Betty Catroux says. “I don’t know how long it took (to renovate), but François did everything—I didn’t do a thing.” 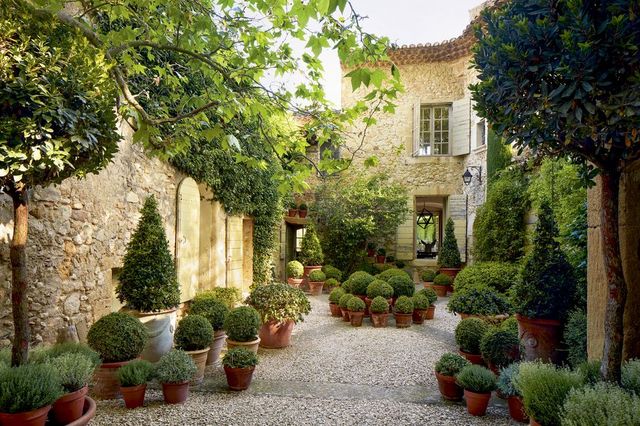 What charmed François most about the architecture of Les Ramades were the vaulted ceilings and the interior courtyard. “Lourmarin was in the center of the war between Protestants and Catholics,” he points out. “Everything was fortified and had central courtyards where the residents could protect themselves.” The inner courtyard also recalls the traditional riad-style homes of French-colonial Algeria, where François grew up as the son of “grand bourgeois” landowners and was the schoolmate of couturier Yves Saint Laurent. It was Betty who brought them back together as adults. “I met both more or less at the same time in nightclubs,” she says. “My life is a fairy tale because of them.” The trio’s friendship remained tight until Saint Laurent’s death in 2008. 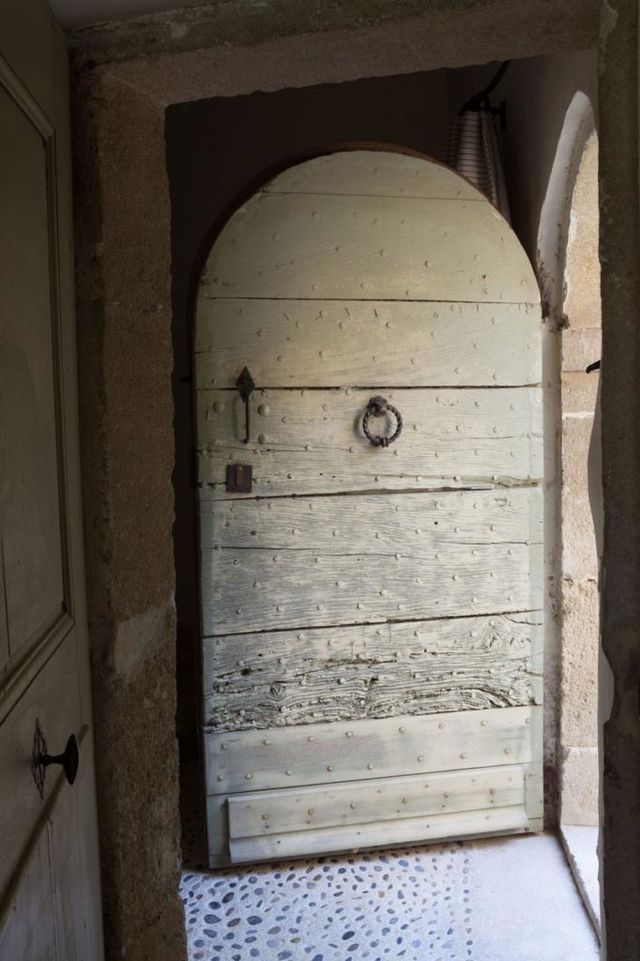 According to the old real estate listing, the property consists of a 16th century stone house, which is divided between main quarters and a separate guest section. In total, it measures about 5,300 square feet. (There’s an extra 750-square-foot caretaker’s cottage nearby.) All told, the property has nine bedrooms.

The oak center table is 18th-century English, the 1940s leather chairs are by André Arbus, and the tripod side table and pendant were designed by Catroux; the curtains are of a Bernard Thorp cotton, the papier-mâché donkey is from Blackman Cruz, and the lion sculpture on the mantel is from the 17th century. 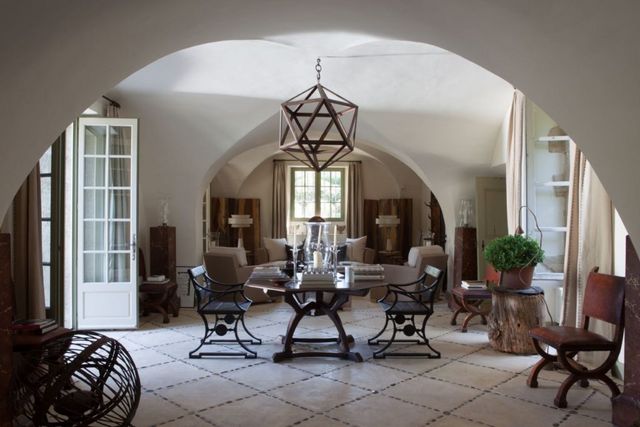 The decor François does for his clients could be called high 1970s decadence, heavy with important art and rich materials, but here he has kept things light and casual. The palette is stone gray and garden green, linking the interiors to the nature outside. He put down a local flooring, called calade, made of river stones embedded in smooth cement. “If you squint, it’s like a Moroccan rug that travels through the house,” he explains in his monograph, François Catroux, published in 2016 by Rizzoli.

“There are a few monumental pieces, such as the polyhedron pendant in the living room, which he designed and had made out of oak, and a pair of exotic wood screens, which he first spotted decorating the windows of the Cerruti boutique on the Place de la Madeleine in Paris and negotiated to buy.” 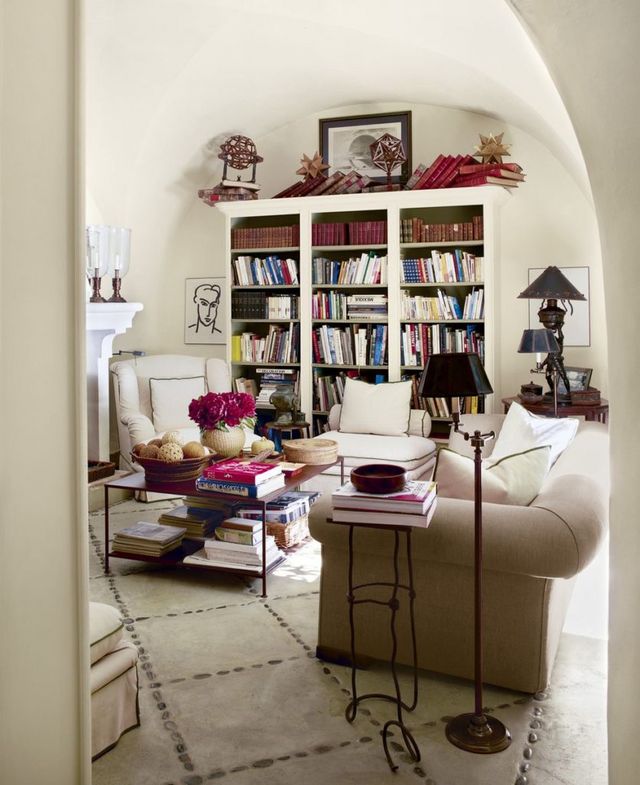 Catroux designed the library’s sofa and chairs, which are upholstered in a Bernard Thorp fabric, as well as the bookcase, which is flanked by artworks by Henri Matisse. 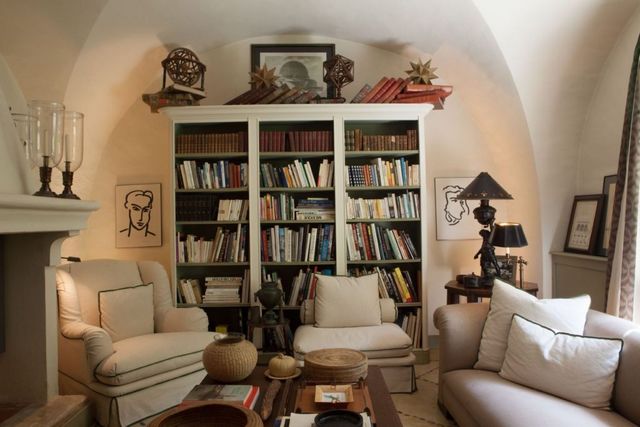 Catroux characterizes the decoration as a mixture of themes. “It’s very sober, not a showcase at all. You can look at the pictures and judge for yourself,” she says. “I know when things are beautiful, and everything François did is perfection. I just got to look around. I was very happy, and very lucky.”

A wall sculpture by Jean Derval.

“We are not often in this room because the idea is to always be outside. But fortunately this is the room you have to pass through to get outside, so we see it every day. It’s more like a gallery than a dining room.”

The dining room’s oak table, a flea-market find, is surrounded by French chairs from the 1940s.

A straw wall hanging of an Alexander Calder design serves as a rug in the kitchen; the traditional Provençal floor consists of stones set into cement. 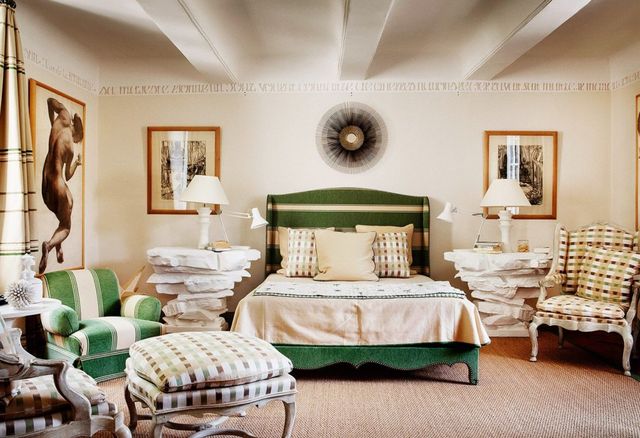 “It’s comfortable, with a mix of important designs such as a 1930s prototype of a chair by Axel Einar Hjorth; flea-market finds like the mirrors he had made from tractor wheels; and common commercial items, like a Crate & Barrel sunburst mirror in the guest bedroom.” 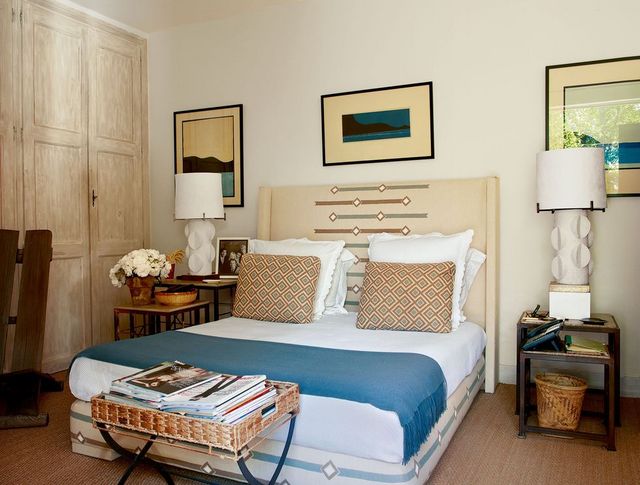 On the walls of the small primary bedroom is a series of collages by Saint Laurent. “Yves gave me everything: his love, his clothes, his jewelry, part of his life, and his art,” Betty says. “When he got inspired, he would write or draw or paint, and he gave what he created to me.” 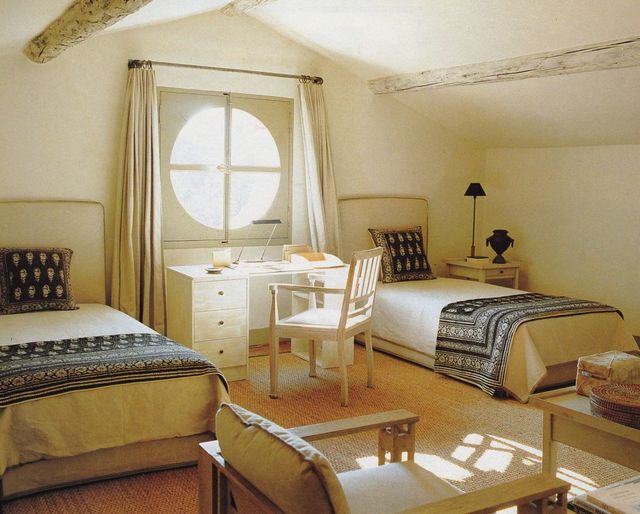 “Catroux installed an oeil-de-boeuf window in a guest room that retains Provençal simplicity.”

The woven chairs are by Tectona.

The woven sofas, chairs, ottomans, and tables are by Tectona.

Several years ago, François added an outdoor living room and dining room, semi-open spaces that are oriented to block the powerful mistral wind. The outdoor dining room’s clay tile roof is supported by massive columns François had copied from the nearby medieval Château d’Ansouis. On the patio of the outdoor living room, he placed an old stone horse trough that he converted into a fountain, making the area that much more serene. “This room has changed my life,” he says.

A 16th-century fountain is topped with a contemporary weathervane; driftwood geese and an antique wrought-iron ship’s chandelier act as sculpture.

A 16th-century fountain is topped with a contemporary weathervane; driftwood geese and an antique wrought-iron ship’s chandelier act as sculpture. 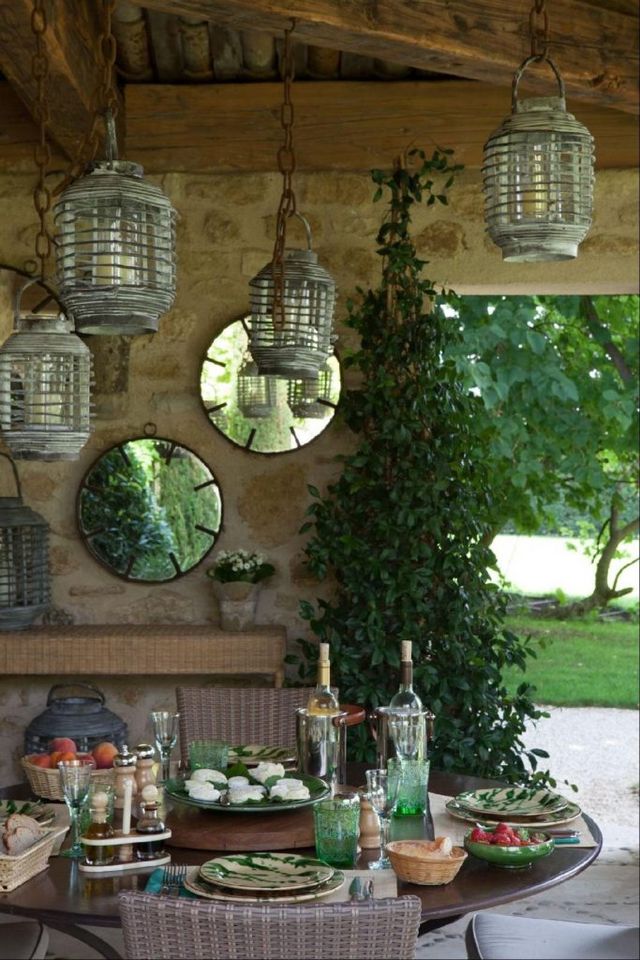 An outdoor dining terrace is hung with lanterns from Vietnam. 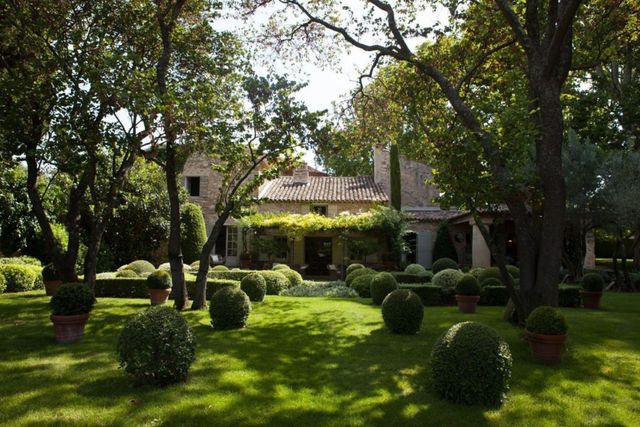 “Among their many improvements to the buildings, they added a massive outdoor terrace, a two-car garage, and a pool house. Perhaps most impressively, the property is covered in landscaped gardens, with boxwood, lavender, and flowers. There are allées of cypress trees, a tennis court, and ample outdoor lounge areas.”

The trellis was designed to enclose the terrace with views toward the fountain and pool beyond. The same floor pattern set with river stones extends outdoors. 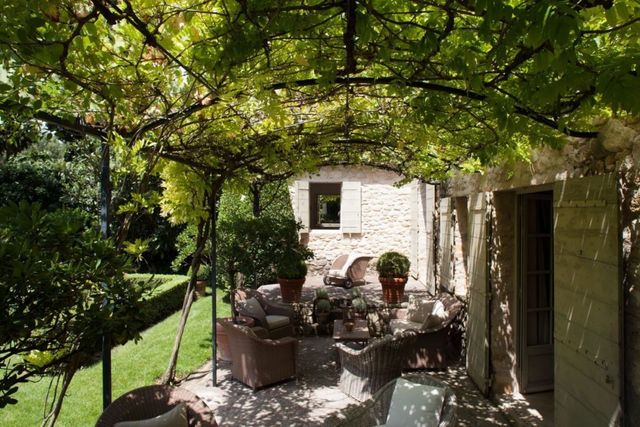 Once again, Betty Catroux deflects any and all credit for the manicured grounds. “It was all François’ idea,” she says. “He wanted it all to be green, and we have the most amazing gardener working for us, and for years he’s kept it perfectly.” 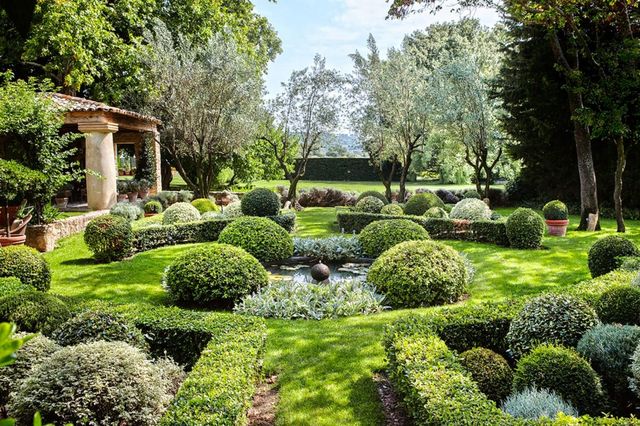 “The estate is located in a rural setting, but it’s relatively close to a variety of towns and cultural offerings. It’s a 10-minute walk from the town of Lourmarin, which Catroux notes was the birthplace of the writer Albert Camus.” 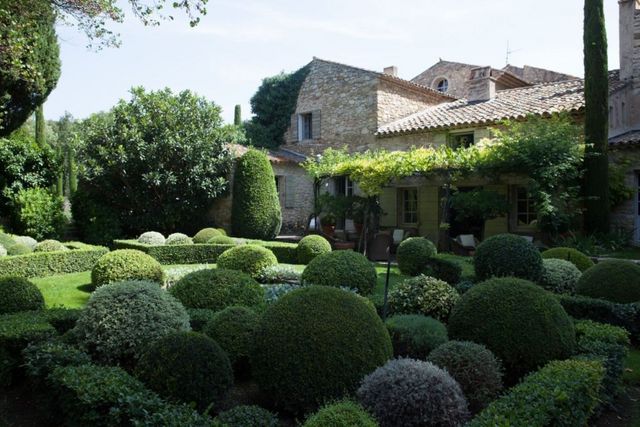 Despite calling the home “a piece of heaven,” Betty Catroux has no regrets about selling the property—and everything in it.

“Listen, I have no attachment to material things,” she says. “So it doesn’t move anything in me to sell, and I love the idea of starting new and leaving the rest behind. That’s the way I function.” 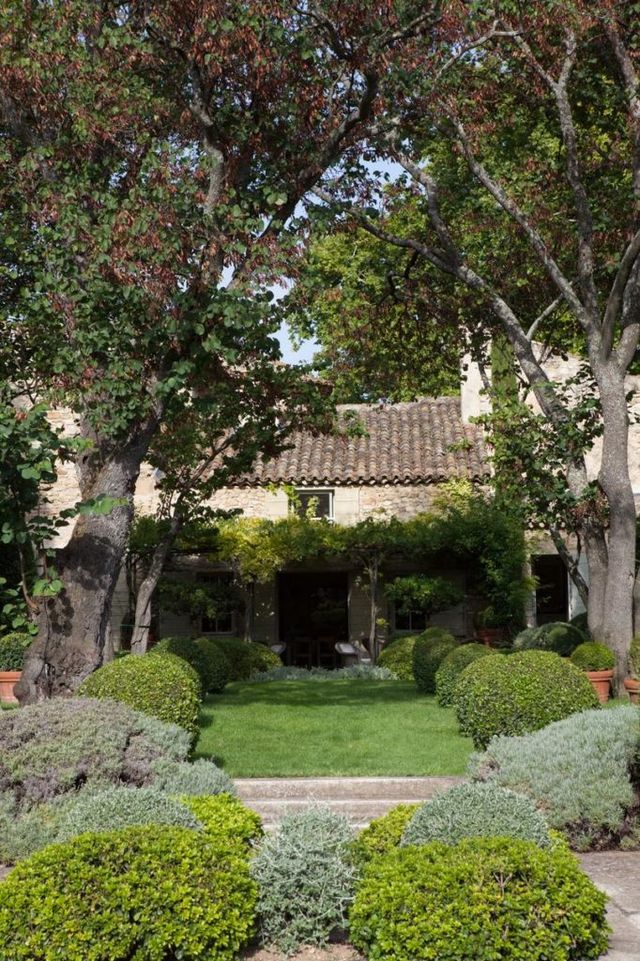 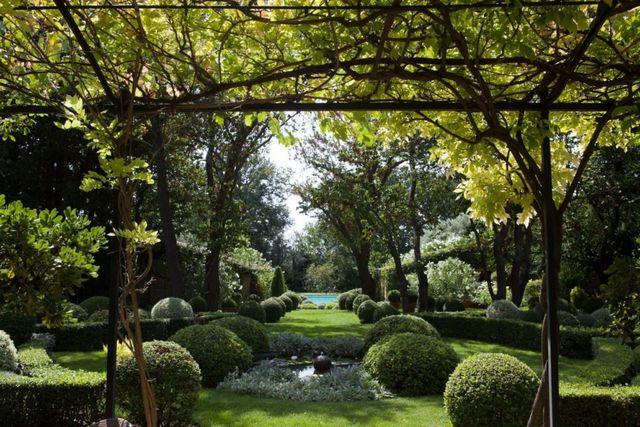 “Twice each season, the couple invite a pack of friends and the house fills with noise and activity. On occasion they receive intimates such as former Yves Saint Laurent CEO Pierre Bergé, who has a home in nearby Saint-Rémy-de-Provence, for a Provençal dinner. Otherwise, the pair remains alone, each relishing the other’s company.”

The pool sits amid a grove of oak and olive trees.

The Provençal garden has a swimming pool, tennis court, and countless boxwoods, lavenders, and Cypress alleys.

View original
This post is tagged in:
Save
10 loves 4 saves
Subscribe to Habitually Chic
Get updates delivered right to your inbox!

Will be used in accordance with our Terms of Service
More posts from Habitually Chic
Add a blog to Bloglovin’
Enter the full blog address (e.g. https://www.fashionsquad.com)
Contact support
We're working on your request. This will take just a minute...
Enter a valid email to continue