The Cherry Street Inn from the Movie “Groundhog Day”

In honor of Groundhog Day, I thought it would be fun to take a look back at the 1993 comedy that still makes me laugh every time I see it. I always thought that if Bill Murray had to get stuck reliving the same day over and over again, at least he was staying in a charming Bed & Breakfast like the Cherry Street Inn, right?

Murray plays a weatherman who goes to Punxsutawney, Pennsylvania, to cover the annual Groundhog Day Festival.

The movie was filmed in Woodstock, Illinois, about an hour northwest of Chicago.

A reader named Jeff grew up there and told me about the Victorian they used for the Cherry Street Inn. He says the house had been completely white, trim and all, before the production designers painted it for the movie — but only the front-facing parts of the house that would be seen on film: 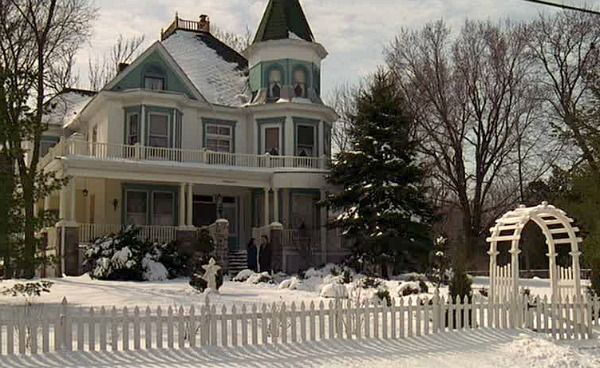 Jeff writes, “I grew up in Woodstock and played in the home which was owned at the time by my friend’s parents. This was the largest home I had ever been in and very grand indeed. My most vivid memory was playing basketball on the 3rd floor, a huge ballroom that was used by the kids as a play area.”

The interior scenes of the Cherry Street bed and breakfast were not filmed inside the actual house, however. The only times the crew entered the house at all were to turn on lamps for the proper lighting effects needed for the exterior shots. It was a private house at the time (not a B&B). They built the interiors on a soundstage in a warehouse nearby.

Screenwriter Danny Rubin said he was inspired to write the story after reading Interview with the Vampire, which got him thinking about what it would be like to live forever. The original idea was to have him relive February 2nd for 10,000 years, but in the end, director Harold Ramis says that his ordeal probably lasted closer to 10. 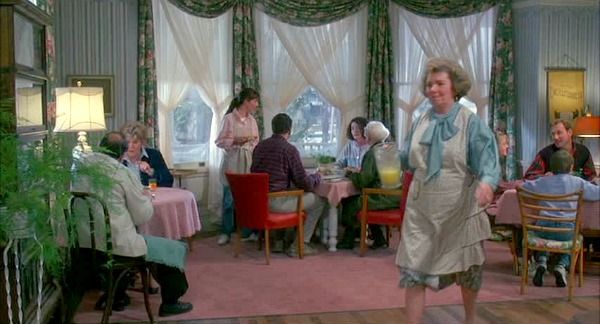 In the commentary they talk about how miserably cold it was when they were filming. They had to put heaters around actors during outdoor scenes “to keep their faces from freezing.”

The innkeeper Mrs. Lancaster asks Phil every morning how long he’ll be staying. After the first day he doesn’t really know how to answer that!

When I was taking these screenshots I noticed that they have a framed painting of the house hanging in the hall:

Phil wows his fellow residents at the inn when he knows all the answers on game shows:

The staircase has a beautiful stained-glass window at the landing: 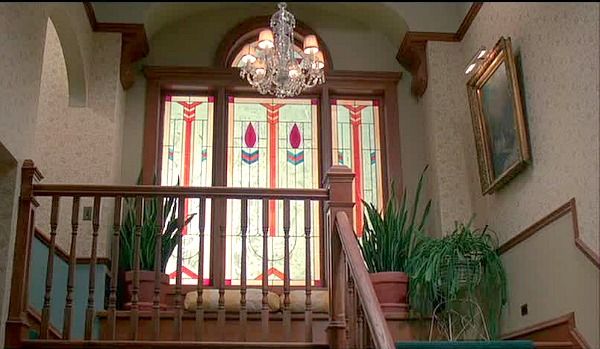 There’s a bathroom Phil has to share with the other guests down the hall. Unfortunately, the water temperature is never quite right: 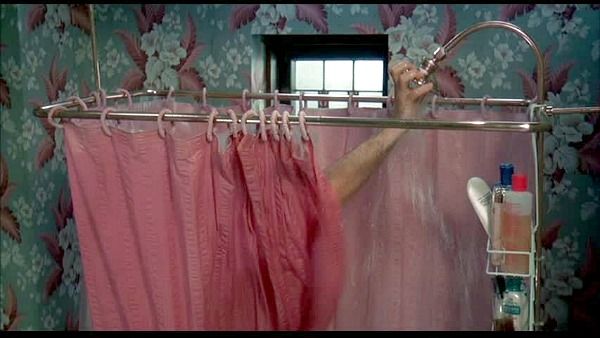 In the deleted scenes we see Phil mastering pool, taking bets on basketball games, and bowling perfect games. He also beheads the ice sculptures with a chainsaw in one.

Early drafts of the script explained Phil’s situation by having an old girlfriend put a hex on him to teach him a lesson. In the end, though, they left it up to the viewers’ imaginations. 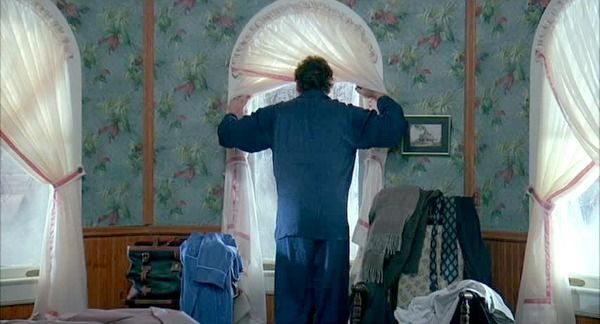 This is the view of the neighborhood from his room: 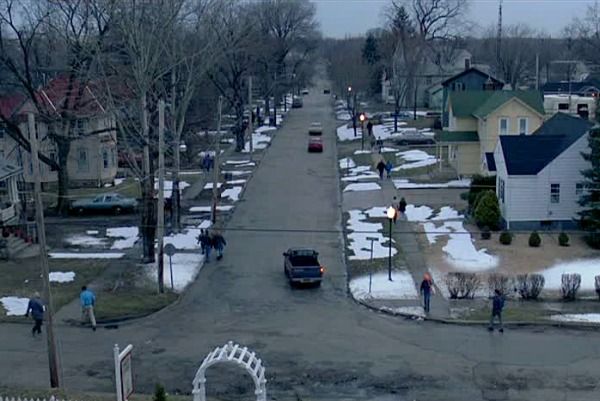 Every morning he wakes to the radio alarm clock and the local station playing, “

Even though he tries to destroy the alarm clock, it’s always working again the following morning…

David Nichols was the production designer for the movie, and Lucy Fischer was the set decorator. Incidentally, Fischer also worked on the house for the Christmas Vacation movie (I featured photos of those sets here.) 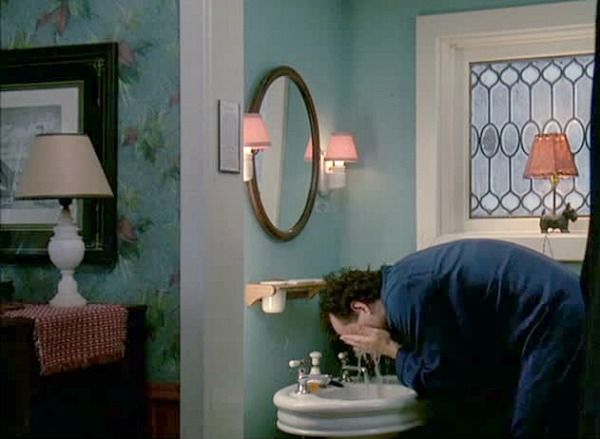 Andie MacDowell played Phil’s producer Rita who goes to Punxsutawney with him for the festival. He can’t stand her at first but falls in love with her as he gets to know her.

When she visits him we see that he has a sitting area connected to his bedroom. 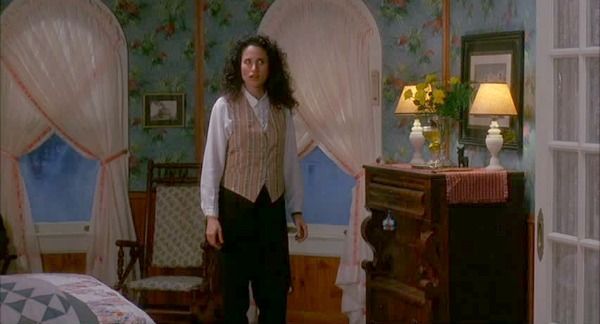 In the commentary they say that she got such a kick out of Bill Murray that sometimes she couldn’t stop laughing during their scenes.

By the way, did you know that Brian Doyle-Murray, who plays the gravelly-voiced Groundhog Day official that Phil saves from choking, is Bill Murray’s older brother? (Also have to add for fans of the sitcom The Middle that he plays Frankie’s boss at the used-car lot. Love that show.) 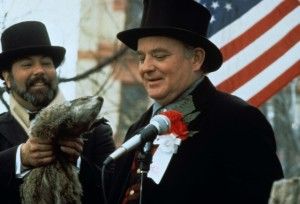 I can’t resist showing you this coffee table in his therapist’s office. We had one just like that when I was growing up! Brings back memories. As do those plaid pillows and the hunter green sofa. If you had something similar in your house, raise your hand!

It was a big deal for the town of Woodstock to have this movie filmed there. It has become something of a tourist attraction since then.

Remember that pothole full of icy water Phil plunges his foot into each morning on his way to the town square known as Gobbler’s Knob? There’s now a plaque on the ground that says, “Bill Murray Stepped Here.”

Back to the house — it was bought by an enterprising couple for $435,000 in 2008, and they turned it into a Bed & Breakfast called the Royal Victorian Manor. Here’s how it looks now (or at least it did over the holidays!):

Their website says, “Royal Victorian Manor Bed and Breakfast is an 1894 Victorian home that has evolved to offer the perfect combination of modern amenities while maintaining its original majestic qualities. Renovations began in late summer 2009, completed in February 2010.”

“Large and stately, our nineteenth century home reposes at the top of the hill on Fremont Street and looks out over the city like a Victorian monarch surveying her realm. Built in 1894 by Judge C.P. Barnes, a McHenry County judge, the house was occupied by the judge and his wife and two children until 1914.”

“An example of Victorian architecture with a Queen Anne rococo decor, our Manor has undergone a facelift to bring back her former glory and adding a modern twist.”

I’m loving the staircase, even though it isn’t as grand as the one in the movie:

The view from the front of the house hasn’t changed much since Groundhog Day was filmed, although the weather looks a lot nicer!

Old House Dreams featured it when it was for sale last year and has the listing photos. *Update: I just heard from my friends at Estately that it is back on the market again for $985,000. You can see the listing here.*

If you ever want to stay at the inn for Groundhog Day, make your reservations early. The rooms fill up fast!

The San Fran Victorian in Mrs. Doubtfire Want to get my weekly newsletter via email so you don’t miss anything?Subscribe to my mailing list:

View original
Save
Subscribe to Hooked on Houses
Get updates delivered right to your inbox!

Will be used in accordance with our Terms of Service
More posts from Hooked on Houses
Add a blog to Bloglovin’
Enter the full blog address (e.g. https://www.fashionsquad.com)
Contact support
We're working on your request. This will take just a minute...
Enter a valid email to continue