One Pot Gluten-Free Mac and Cheese


Picture the creamiest, cheesiest mac and cheese – made gluten-free and without butter or cream! One Pot Gluten-Free Mac and Cheese is it!

Ahoy, there (yep I just said ahoy which I had to Google to make sure Urban Dictionary hasn’t destroyed the original meaning leaving me wrong and red faced. Right.)

Anyway, greetings! I hope you had a super Memorial Day weekend! It rained pretty much nonstop from Friday to Sunday, but we got out a few times in between rain drops. Monday was gorgeous so the whole family planted themselves on my parent’s back deck to enjoy a tasty cookout under the sun before the rain rolled right back in later that night.

What’s up with the weather, May? At least my flower pots are thriving as a result and I think the rain blast of sunshine on Monday will send herb hill to the next level. Oh yes – she’s baaa-ack! I’ll give ya’ an update soon. :)

In the meantime, I’ve got mac and cheese on the brain – One Pot Gluten-Free Mac and Cheese to be exact! Get. Ready.

The other day I was talking with a friend who is getting tested for Celiac Disease about what her last glutenous indulgence would be if diagnosed, and what mine was too. Any guesses? A hand-tossed chewy pizza? Fat corner slice of Pepperidge Farms Birthday Cake? And ice cold Hell or High Watermelon (or three)?

Umm…it was ALL THE CHOCOLATE MUNCHKINS. All of ’em. Practically cleaned out the neighborhood Dunkin’ Donuts! Ben had a box waiting for me after I was diagnosed which I proceeded to scarf with reckless abandon as soon as we got home from the doctor. You know those really remarkable meals that come around once in a blue moon that make you put down your fork and think, I will never forget this meal! but then you do but it’s no big deal because you can usually just have it again? I will NEVER forget the chocolatey aroma, crisp snap of powdered sugar icing, and doughy, fluffy interior of those chocolate munchkins. That, my friends, was a meal to remember. And it was legitimately a meal because I ate more munckins than I will ever admit to out loud.

Whelp, I didn’t see waxing poetic about donuts coming when I sat down to write this post!

At any rate, mac and cheese is one of those meals that’s not inherently gluten-free but unlike mini fried chocolate cake donuts, is a SERIOUS cinch to adapt, especially because my version has no flour roux. Just 5 ingredients (including salt and pepper!) combine in one pot to make the creamiest gluten-free mac and cheese that tastes like it has loads of cream and butter but is made with, get ready for it….SKIM MILK!

After my CD diagnosis was confirmed and, you know, I wasn’t eating chocolate munckins like a gaggle of hangry toddlers, Ben and I had a dreadful moment in time where we thought it’d be a good call to take the cheese packet from a box of Velveeta Shells and Cheese that had been sitting untouched in our pantry since, I don’t know, 2010, and mix it with cooked gluten-free pasta. Holy cow. VSAC was a staple in both our childhood diets but we both made it about 2 bites in before waving the white flag. It was SO bad!

The good news for you and me though, is that you can get a bowl of creamy, Velveeta-esque mac and cheese without having to put a block of the orange stuff in your grocery cart, and it’ll be gluten-free to boot. Plus this recipes falls into the “throw stuff in a pot and stir” category so, um, hollar.

Start by rinsing 2 cups gluten-free pasta under cold water. I used shells but you could use any short cut pasta. The weight should be 6oz.

Add the rinsed and drained pasta to a saucepan with 2 cups skim milk, 1 teaspoon salt, and a dash of cayenne pepper. Turn the heat to medium then stir constantly until the milk comes to a simmer (mine took about 12 minutes.) Turn the heat down to low then stir constantly until the pasta is tender (another 12 minutes – scroll through Instagram while you stir – you’ll be fine!) Be sure to stick to low heat because if the milk cooks off too quickly there won’t be enough left to cook the pasta.

See how thick the skim milk gets by stirring with the starches released from the pasta? Crazy town! 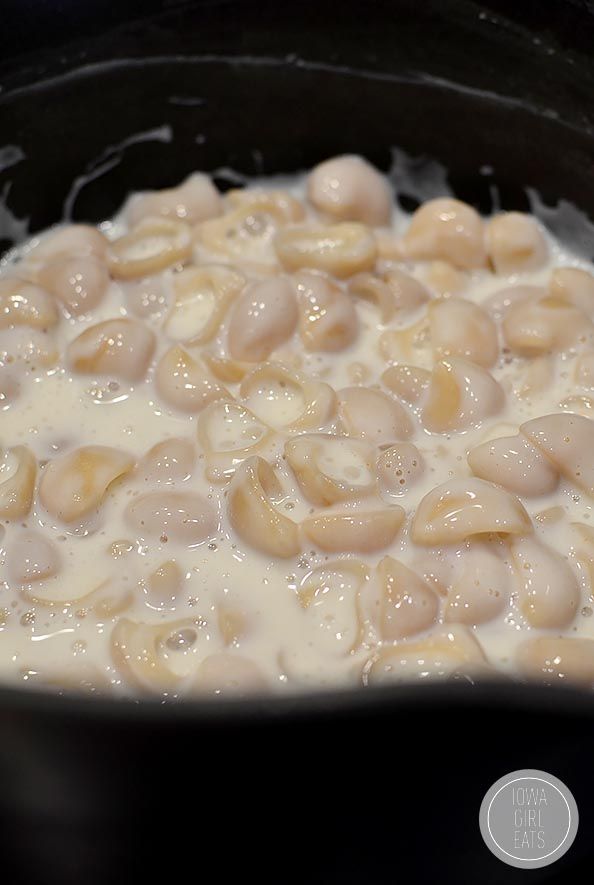 Once the pasta is tender add 1 cup freshly shredded cheese (skip the pre-grated bagged stuff!) then stir until the sauce is smooth, adding in a splash of skim milk if you need it.

This is the fun part of the recipe because you can play around with the cheeses you like and/or have in the fridge – you really can’t go wrong! I used equal parts shredded cheddar and mozzerella. Mozz gives the mac a gooey stretch so if you want to stick with the classic creamy sauce texture stick with medium-hard cheeses like cheddar, monterey jack, and fontina.

Let the mac and cheese thicken for a few minutes with the lid on the pan, then dish ‘er on up!

One Pot Gluten-Free Mac and Cheese

Picture the creamiest, cheesiest mac and cheese - made gluten-free and without butter or cream! One Pot Gluten-Free Mac and Cheese is it!

Adapted from White on Rice Couple

This recipe is courtesy of Iowa Girl Eats, http://iowagirleats.com. 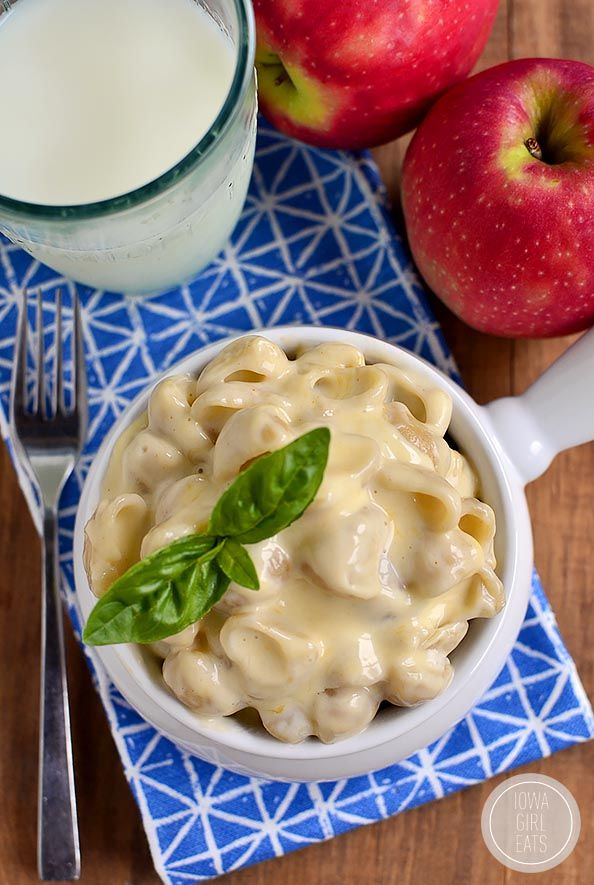 Make this once and you’ll be whipping it up from memory at least once a week – it’s definitely a keeper! And you can of course use regular pasta in place of gluten-free pasta, too. One Pot Mac and Cheese for all!

Will be used in accordance with our Terms of Service
More posts from Iowa Girl Eats
Add a blog to Bloglovin’
Enter the full blog address (e.g. https://www.fashionsquad.com)
Contact support
We're working on your request. This will take just a minute...
Enter a valid email to continue