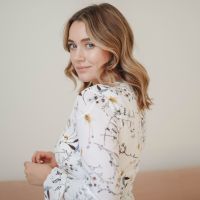 Morning! I feel like I haven’t blogged in forever, but it’s only been a couple of days! I’m ready for a sunny weekend, as I’ve been inside all week (more on that below) and could really do with some fresh air and human interaction.

01. I haven’t been well this week, and I really wanted to give myself some time to recuperate, as usually I’d just ignore it and get on with things – making the whole situation worse! So I gave in and switched off – I haven’t been out all week, I haven’t filmed or taken any blog photos! It’s been pretty boring, but I’m starting to feel a lot better and well rested!

02. I saw the first look at my new blog design this week, which is so exciting! It won’t be in place for a month or so now, but I can’t wait to show it to you! I’ve never had a proper design commissioned because I hated my old blog name, so it feels super profesh to have a big makeover on the cards!

03. We finished the new season of Orange Is The New Black this week – I’m devastated it’s over! I think that was the best season, I feel like the characters have really found themselves this season and all played their part in such a poignant, heartwarming story. I love everyone! Anyway, the ending was next level and it will take me a while to get over it…
To take our minds off things, we watched the Fundamentals of Caring on Netflix last night and it was hilarious! Paul Rudd, Selena Gomez and Craig Roberts were all so amazing – I highly recommend, I’m pretty sure I was sobbing and laughing at one point.

04. I think I’m going to brave the outdoors tomorrow and head for a wander around the West End with Jordan. We haven’t been up that way in ages, and I could do with a fresh bunch of flowers and an Instagrammable lunch! Maybe a cocktail too…
I’m going to make an effort to do more outfit photos, because I feel like I really need to up my game when it comes to sharing my style. It might even justify all the clothes I buy, too…

05. This morning I plan on having a big pamper and maybe an online beauty splurge to aid my recover process… obviously. I need to fake tan, paint my nails, condition my hair and slap on a couple of face masks. I also want to buy a couple of the new Charlotte Tilbury Hot Lips lipsticks because I got a couple through yesterday and I need more. MORE. They’re so good.
I’m also lusting after a Byredo fragrance, another Diptyque candle, an Artis brush and some NARS bits. I already treated myself to the new Long Hot Summer palette, and I’m counting down the days until it’s mine!

What’s new with you guys this week?

Will be used in accordance with our Terms of Service
More posts from Kate La Vie
Add a blog to Bloglovin’
Enter the full blog address (e.g. https://www.fashionsquad.com)
Contact support
We're working on your request. This will take just a minute...
Enter a valid email to continue