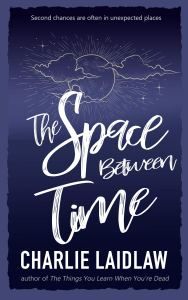 Emma Maria Rossini appears to be the luckiest girl in the world. She’s the daughter of a beautiful and loving mother, and her father is one of the most famous film actors of his generation. She’s also the granddaughter of a rather eccentric and obscure Italian astrophysicist.

But as her seemingly charmed life begins to unravel, and Emma experiences love and tragedy, she ultimately finds solace in her once-derided grandfather’s Theorem on the universe.

The Space Between Time is humorous and poignant and offers the metaphor that we are all connected, even to those we have loved and not quite lost. 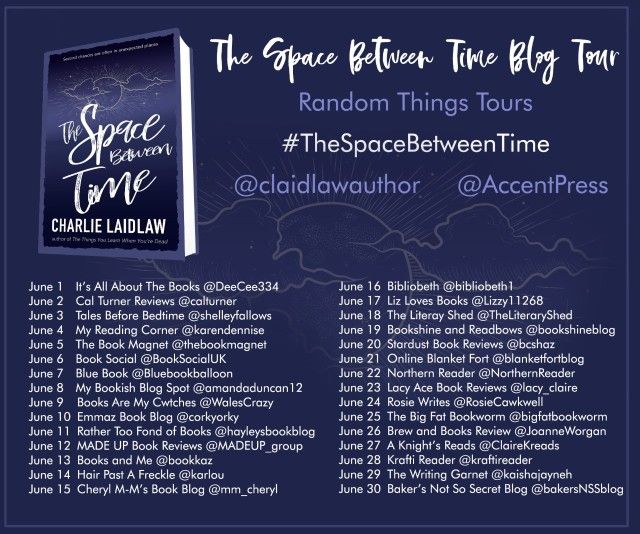 I voluntarily reviewed an arc of this book. All opinions are my own and no content may be copied. However, authors and publishers may use elements of my reviews for quotes.

I am so pleased to be involved in the blogtour celebrating and promoting the launch of Charlie Laidlaw’s latest novel: The Space Between Time.

The Space Between Time is the second book I’ve read by author Charlie Laidlaw and what I’ve learned is that he writes unique, endearing stories that are quite ingenious but ultimately very relatable.

What I liked about this story was that Emma Maria Rossini, even though she was the daughter of a famous film star, had a beautiful adoring mother, her life was just like anyone else’s. She suffered the same losses when her father went away to work, when he couldn’t be there for milestone events. Her mother too suffered, she thought in silence but Emma noticed.

Through Emma’s childhood when her father was on the cusp of stardom Emma was at her happiest. Once stardom encroached on their lives their home life changed and relationships between all three of them: daughter, mother, father, husband and wife took on different versions of their former self.

Tragedy was sadly soon to strike Emma’s life and from that moment on her spell in her charmed life was broken and Emma was to struggle immensely. However, when someone from Emma’s past appears at another sad moment in her life it felt like another turning point for Emma. Emma had to reach rock bottom before she could learn about the scars she’s accrued along the journey of life.

The Space Between Time is such a compelling read that was quirky with a humbling honesty and poignancy to it. I found Emma to be a very endearing character and I championed her throughout the story. The concept around the story of our lives being connected, sometimes by the minutest of links and moments, was quite profound. Another excellent, original read from Charlie Laidlaw.

Charlie Laidlaw was born in Paisley and is a graduate of the University of Edinburgh. He has been a national newspaper journalist and worked in defence intelligence. He now runs his own marketing consultancy in East Lothian. He is married with two grown-up children.

View original
This post is tagged in:
Save
Subscribe to kraftireader
Get updates delivered right to your inbox!

Will be used in accordance with our Terms of Service
More posts from kraftireader
Add a blog to Bloglovin’
Enter the full blog address (e.g. https://www.fashionsquad.com)
Contact support
We're working on your request. This will take just a minute...
Enter a valid email to continue