The bathroom is well underway! Most projects are like icebergs — the bulk of work happens under the surface, before a room starts looking like a room. Read all about our plans (and subsequent changes to plans), challenges and design ideas.

Welcome to our funhouse! This bathroom project has been keeping me sane for the past few weeks. I got a good leg up on it right after Halloween. I originally said this was going to be my (Leah’s) project from start to finish. That has changed and before I tell you why, I’ll tell you this – I’m not sorry, not even a little. 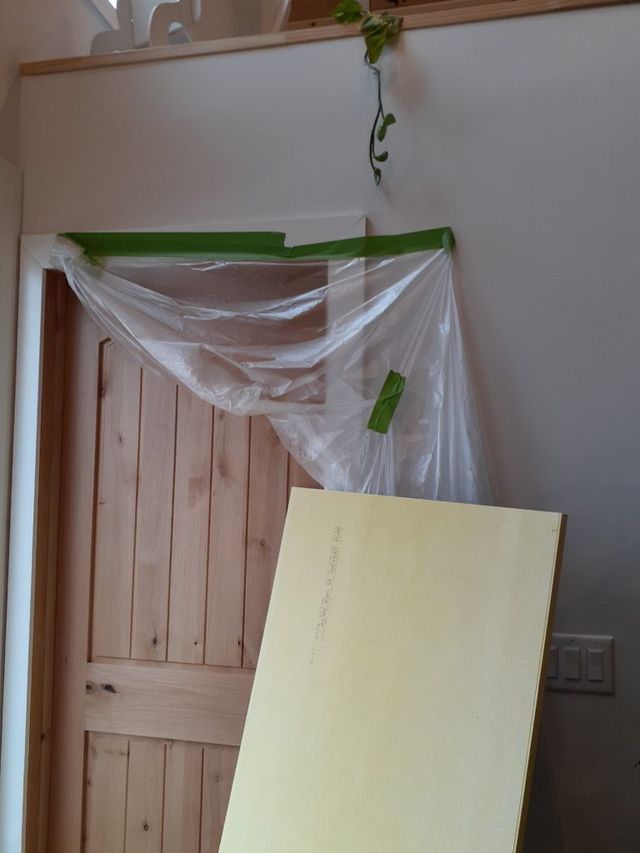 Originally it was Joe’s idea for me to do the bathroom so he would be free to work on his jet boat project (don’t ask). I went along with it because I thought it would be a fun challenge for me, and I could listen to podcasts while working solo. So off I went, until covid knocked me out for almost 7 weeks, right up until NYE. Rough I tell you. So Joe jumped back in, but I’m still spearheading this thing so don’t think I’ve kicked back! Also, it’s one of the few things we both enjoy doing and do well together.

I started with a blank canvas. Electrical and plumbing already roughed in.

My first task was hammering in all these metal plates to protect our electrical wires from future sheetrock screws.

I believe they are called stud guards. 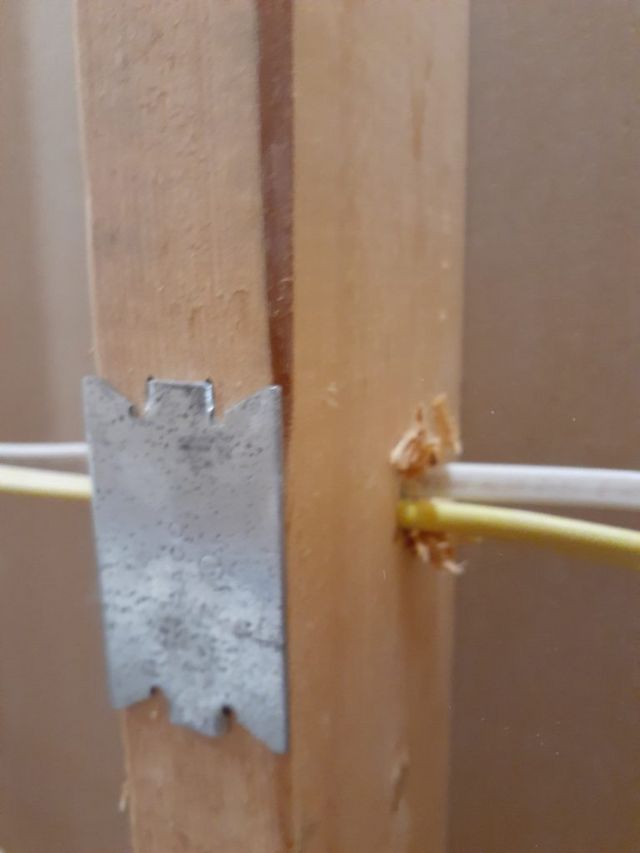 They not only protect electrical cords but also plumbing pipes.

After that, I got insulating. This is not a difficult task, just a very messy one. I started throwing batts in, cutting them to size with a razor blade and stuffing them between studs.

We looked for the denim recycled blue jeans insulation because it’s more eco-friendly, but we couldn’t find any anywhere! But we found this mineral wool insulation which is also a better alternative to pure fiberglass (the pink stuff). It’s 70-80% recycled material vs 20-30. Traditional fiberglass is plastic glass. And anything without plastic is a win. This stuff apparently comes from leftover rocks! Fascinating to learn more about if you feel like going down a rabbit hole.

It has a really high R-value and never loses R-value unlike traditional insulation. (Joe is in the energy efficiency business so I pick up a few things). It’s also made from natural materials and is fire resistant and sound resistant as a bonus. It’s just slightly more expensive, but was a great option for us! PSA from Leah and Joe: properly insulating your home is super important to save energy, save money, keep you warm and lower emissions.

And remember to fully suit up! You do not want to breathe this in or get it on your bare skin or else be itching for days. 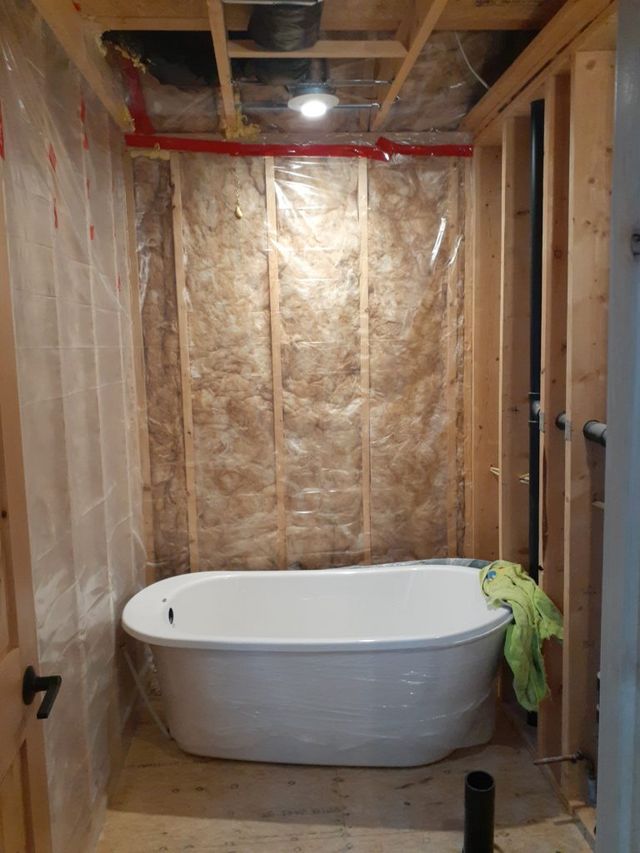 So I did most of this until I got sick. Insulating the ceiling however is a two person job with gravity working against you. After the batts are in, staple sheets of poly over them to secure them and create a barrier. Tape up any holes or cracks.

Onto sheetrock. Also a two person job (especially for the ceiling!) 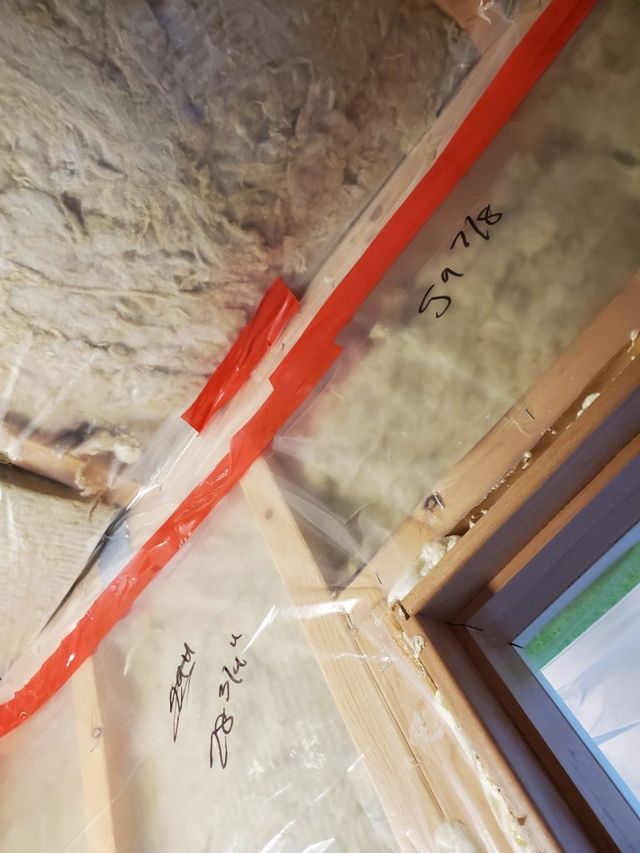 We carefully measured each size piece we’d need to cut.

Then we score, snap and screw into the wall.

We did end up making a quick change to plans that I’ll show later that required us to open up the wall. Caught it just in time before sheetrock!

DensShield for the bath/shower area and regular sheetrock for the rest of the walls.

Very excited to try a fun idea I have for an accent niche here!

It’s so nice not to worry about mudding and taping the shower area! Just tiling. We did have to use this mesh tape on the joints which I forgot to photograph.

So how did we know which type of sheetrock to hang where? Well that depends where we wanted to tile. With a bath tub, there’s not a clear line where there is for a shower, you have a curtain. (We have a freestanding tub). 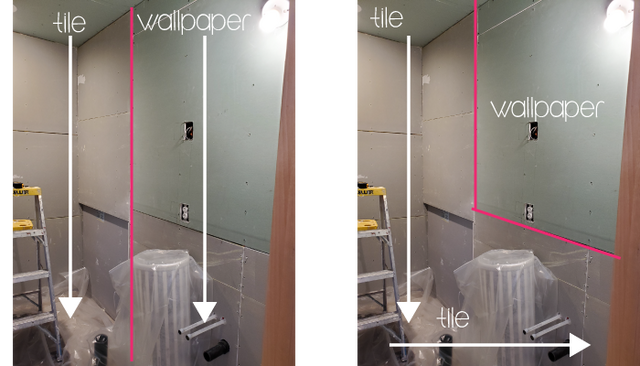 Initially, I planned to do a clean break right after the bathtub, both tile and wallpaper floor-to-ceiling side by side. But while we were right in the middle of hanging sheetrock, I got a feeling that would be too abrupt of a transition. I had an idea to instead drop the tile down to wainscoting height and carry that through the rest of the room. 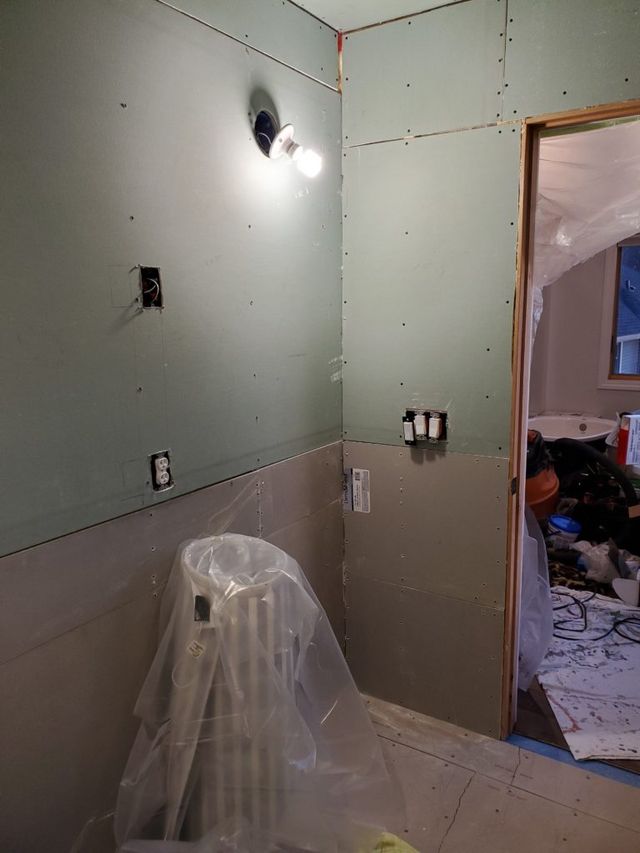 I made a quick video call to my brother’s amazing interior designer girlfriend and got the reassurance I needed to change plans on the fly. Joe really didn’t care, he just wanted a plan (understandably) so it was a little stressful in the moment! But the video chat helped decide where to end the tile and how high to go (wainscoting should be higher than vanity sink faucet).

So everything green = wallpaper, everything gray = tile. I had already ordered all the material, so hopefully we have enough for this new design. It’ll be close!

This corner will be interesting… Time to get trim and see where the tile butts up.

Whew, so after we got that all mapped out, We did have to mud, tape and sand the walls that get wallpaper treatment. It has to be really smooth and perfect for this! As much as I enjoy painting, it’s refreshing to have 0 paint for this room.

And Joe did the ceiling. Mud, tape, sand, knockdown texture, prime and paint. 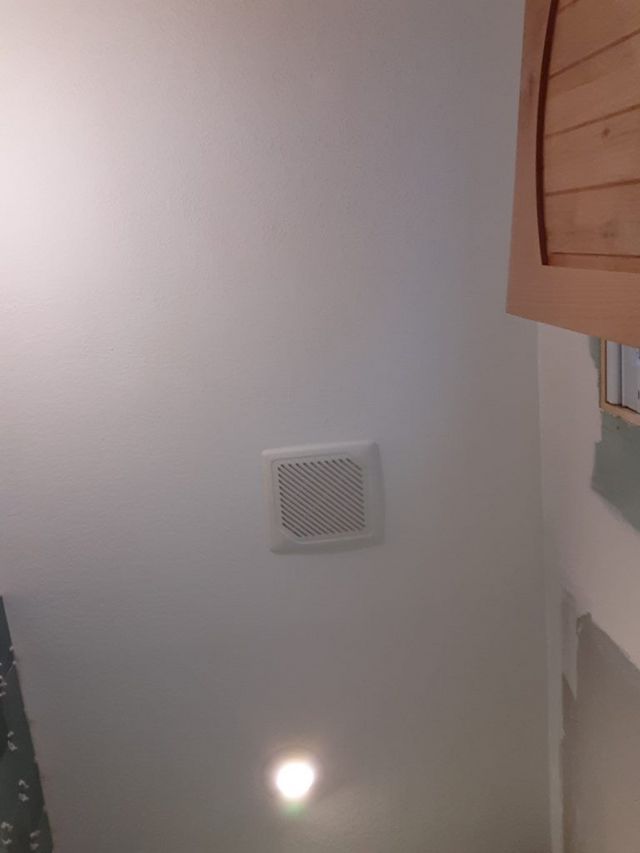 One more bonus fun issue we had — the bathtub is too big! We had to buy this tub over a year ago to run plumbing and determine location. I swear we made sure it would fit, but apparently not after rocking and tiling the walls! I have learned to actually enjoy this creative problem solving process and not panic. When we brainstorm ideas together, we can always figure something out. Usually Joe starts with utility and I shoot down the ideas that will look tacky or sloppy. Then we end up with something better than the original plan. Eventually Joe remembered they make a thinner form of DensShield, so that’s what we used down below so the tub should fit snuggly now after the wall is tiled. Nothing goes 100% to plan, I don’t care how professional or amateur you are. I think what matters is how you move forward and find solutions.

View original
This post is tagged in:
Save
Subscribe to Leah and Joe: Home DIY Projects & Crafts
Get updates delivered right to your inbox!

Will be used in accordance with our Terms of Service
Forgot Password?
Subscribe to Leah and Joe: Home DIY Projects & Crafts
Get updates delivered right to your inbox!

Will be used in accordance with our Terms of Service
More posts from Leah and Joe: Home DIY Projects & Crafts
Add a blog to Bloglovin’
Enter the full blog address (e.g. https://www.fashionsquad.com)
Contact support
We're working on your request. This will take just a minute...
Enter a valid email to continue