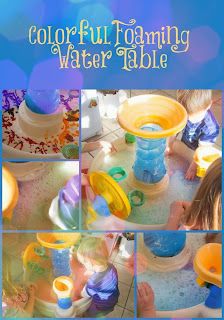 For part of our New Year's Eve Countdown, I included a Colorful Foaming Water Table. This was a super easy activity to set up, but it produced lots of excitement, especially when colors started appearing! To start with I squirted food coloring in the water table and covered it with enough baking soda to completely hide it. I had to make sure the girls weren't around for that or it would have ruined the colorful surprise! 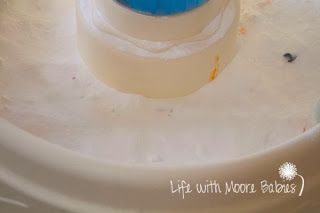 Once we had popped the balloon that contained our foaming water table, I armed the girls with glasses of vinegar and gave the jug to Nathan. He poured the jug down the tube, and they poured their little glasses wherever they wanted (in the table of course). And as the foam began the colors appeared. 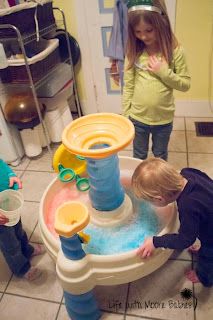 Each time the foam stopped, we adding more vinegar in a different spot trying to find all the buried colors. Once a pocket of baking soda was hit, up came the new foamy color before it mixed with the rest.

Even after the foam was gone, they all insisted on getting their hands in it. They really enjoyed playing with the undissolved baking soda at the bottom of the table for some reason. 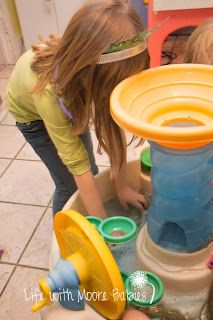 In fact it was so much fun that we had to try it again the next day! Got some better pictures of the colors in the light too! Green, yellow, red, blue, purple...we saw them all! 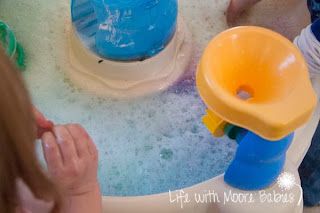 It was so incredible to be able to poor vinegar in one spot and watch a new, colorful batch of bubbles cover the icky colored liquid beneath! And it was always a surprise which color it would be!

View original
Save
1 love
Subscribe to Life with Moore Babies
Get updates delivered right to your inbox!

Will be used in accordance with our Terms of Service
More posts from Life with Moore Babies
Add a blog to Bloglovin’
Enter the full blog address (e.g. https://www.fashionsquad.com)
Contact support
We're working on your request. This will take just a minute...
Enter a valid email to continue