This plaque could be found, until recently, on White Post Lane, Hackney Wick. It celebrates one of the many local industries that made a mark on the nation — or, rather, removed marks from the nation. For hereabouts stood the factory of The British Patent Perforated Company, pioneers of perforated toilet tissue on a roll.

Their innovative product was sold from 1935 under the established brand name of Bronco. Before these rolls, toilet-goers would withdraw sheets from a pack, much as we still deploy nose tissues. The perforated, continuous roll was more convenient and hygienic, removing the need for a box or container that could harbour germs.

Older readers might recall Bronco (or similar rival, Izal). The brand's other hallmark was its severity — harsh, shiny paper with the absorptive powers of a brick. I just about remember the sensation from my school days. It was like shoving baking parchment between the bum cheeks. The crinkly bottom experience was marketed as a virtue. "Medical opinion says that to avoid infection, toilet-tissue should be non-absorbent," reckons a Bronco advert of the 1950s. That's why "sensible, hygiene-minded mothers" chose it.

Although the rolls found their adherents, flat packs could still be purchased into the 1960s. This housewife simply can't choose. From the British Newspaper Archive, Aberdeen Evening Express, 25 April 1961. Image (c) DC Thompson & Co, created courtesy of the British Library Board.

It all started in Hackney Wick, where the perforated rolls were developed. But the plaque is a tad deceptive. It appears to credit Bronco for the innovation. Its parent company was the first to successfully market such stuff in this country, but the idea goes back much further. American inventor Seth Wheeler is recognised as the first to patent perforated paper supported by a roll, half a century before Bronco in 1883. He also foresaw the need for toilet roll dispensers, and was presumably the first to get into an argument about whether the paper should be installed in an overhand or underhand configuration. Whatever, perforated paper was on sale in the USA by 1890, courtesy of The Scott Paper Company.

Bronco continued to be sold until the 1980s, its appeal dwindling in favour of the softer tissues we use today. The last roll was ceremonially flushed away in a vintage toilet at the Science Museum in 1989. The bottom had dropped out of the hard-tissue market.

The north-western part of Walthamstow has also played a significant role in our turd-wiping history. It all started on the apostrophe-dodging St Andrews Road, a part-residential, part-commercial street off Blackhorse Road.

One of the world's most celebrated brands of toilet tissue was first manufactured along this street. Indeed, the brand is indirectly named after it. 'Androll' (And(rew) roll) was developed here at Andrew Mills Ltd in 1942. It soon changed its name to the one still familiar today: Andrex.

Image by the author, and not based on actual events.

This was no bog-standard product. The two-ply sheets were much softer than other tissues on the market, and were first marketed as disposable handkerchiefs. Harrods had the exclusive licence. Business boomed, and the factory was soon employing over 400 people. The Walthamstow company remained flush with success for half a century but, by 1995, and after several mergers, the brand had left London for Barrow.

We took a virtual tour of St Andrews Road on Street View (quarantine not allowing real-world exploration). We couldn't find any plaques or memorials to the street's momentous history, but we did find a brush manufacturer (handy if you don't have paper), a suggestively brown pub, and a council sign that would seem to forbid acts of al-fresco excretion. 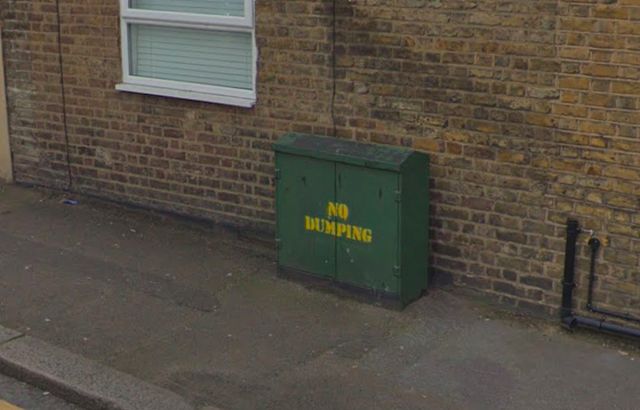 Another clue to the area's past can be found in a side-street name. Papermill Place leads off to the south, lined on either side by new-build flats. The development was built directly over the site of the old Andrex factory. We wonder if the developers made mention of this in their sales material.

View original
This post is tagged in:
Save
Subscribe to Londonist
Get updates delivered right to your inbox!

Will be used in accordance with our Terms of Service
More posts from Londonist
Add a blog to Bloglovin’
Enter the full blog address (e.g. https://www.fashionsquad.com)
Contact support
We're working on your request. This will take just a minute...
Enter a valid email to continue