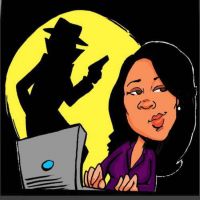 LaJoyce Brookshire’s life journey began on the South Side of the windy city, Chicago. In 1984, she relocated to New York City where she secured her first label job with PolyGram Records. In 1991, she took a severance and created her own firm, Retnuh Relations (Retnuh is her maiden name spelled backwards).

LaJoyce continued to excel in her career and eventually found herself working for her longtime friend and confidante, the late Patti Webster, founder of W&W Public Relations. As a senior account executive, LaJoyce had the privilege of working with Patti LaBelle, Gerald Levert, Sean Levert, and The Clark Sisters; among so many others. In 1994, she landed a high profile role as manager of publicity, later promoted to director, with Clive Davis’ Arista Records where she managed the publicity for Aretha Franklin (who requested her personally), the Notorious B.I.G., Toni Braxton and Sean ‘P-Diddy’ Combs among so, so many others.

But Brookshire maintained numerous interests and projects, among them writing. Brookshire is the author of The New York Times bestselling novel, Soul Food, based on the 1997 movie of the same title, written and directed by George Tillman, Jr. Brookshire continued her winning streak as a bestselling author of Web of Deception (1998); Faith Under Fire: Betrayed by a Thing Called Love (2006), initially self-published by Brookshire and later re-released on Karen Hunter Publishing, distributed by Simon & Schuster (2008); and The Last Listening Party of The Notorious B.I.G. (2011) (Quinn 2020).

During her self-publishing days, Brookshire extended her Faith Under Fire brand to film and theater. As a playwright and director, Brookshire also produced

Faith Under Fire On Stage, the critically acclaimed Off-Broadway play, which premiered at the National Black Theatre in Harlem. She has also garnered interest from the Hollywood community to produce Faith Under Fire as a film that focuses on intimate parts of her life story (Quinn 2020).

In 2006, Brookshire received her Doctorate of Naturopathy from Trinity College of Natural Health in Warsaw, Indian. This has spawned her highly rated and viewed YouTube Channel, Ask the Good Doctor, where LaJoyce shares jewels of wisdom about health and wellness with her all her viewers. Dr. LaJoyce Brookshire’s Ask The Good Doctor book series is now published on her company Renewing Your Mind Ink, includes the titles, The Detox Edition (2011), The Detox Edition Remixed For A Healthy New You (2019), Kitchen Warriors 101: Homemade Healthy (2020).

LaJoyce has lead a charmed life but it has not been without struggle and heartbreak. Her strong faith has allowed her to overcome insurmountable obstacles and God has truly gifted her with many talents. To learn more about LaJoyce, please be sure to listen to my podcast interview with her and also read Gwendolyn Quinn’s article, “Dr. LaJoyce Brookshire Turns Her Enterprising Wellness Brand into a Successful Platform in Ministry, Media, Entertainment and Lifestyle”, where I pulled a lot of the insightful information I shared today about LaJoyce’s background.

View original
This post is tagged in:
Save
Subscribe to Mara Prose
Get updates delivered right to your inbox!

Will be used in accordance with our Terms of Service
More posts from Mara Prose
Add a blog to Bloglovin’
Enter the full blog address (e.g. https://www.fashionsquad.com)
Contact support
We're working on your request. This will take just a minute...
Enter a valid email to continue