After making the classic version of my Slow Cooker Kalua Pig recipe for years, I’ve identified its one drawback: the agonizing 16-hour cooking time. The perfume of slowly simmering pork never fails to drive me bonkers. (Plus, it makes my head hurt to calculate the precise time to plop the ingredients in my slow cooker so that it doesn’t finish cooking in the middle of the night.)

But at long last, a solution is at hand!

A few weeks ago, I started hearing from readers about how they successfully cooked kalua pig in their pressure cookers, and my ears immediately perked up. Was it possible? Smoky, fork-tender kalua pig in a fraction of the usual cooking time? Only one way to find out…

After interrogating my resourceful readers (Twitter is a wonderful thing), engaging in good old fashioned research, and futzing around with all the variables (and a good number of test batches) in my kitchen, I came up with my own pressure cooker version of kalua pig. And believe it or not, it may even be better than my slow cooker version. (Blasphemy, I know.)

I’ve extolled the virtues of pressure cooking before, but it’s truly become one of my favorite cooking methods. My trusty stovetop pressure cookers have been workhorses in my kitchen for some time now, but these days, I’m almost exclusively turning to my electric programmable Instant Pot. I can make bone broth at a moment’s notice without having to babysit it like a stove-top pressure cooker. The Instant Pot’s sauté function even lets me brown aromatics or meat right in the pot before I throw in the rest of the ingredients. One less skillet to clean? Hallelujah. 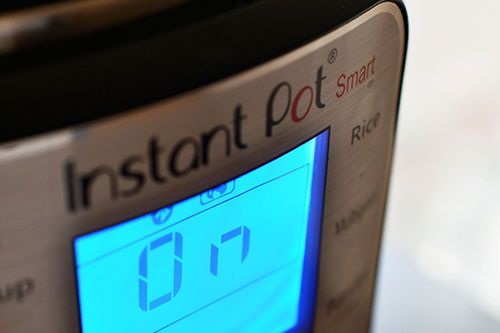 This isn’t a sponsored post, by the way. Instant Pot doesn’t pay me to gush about it; I just love it to death.

One thing to note: The Instant Pot cooks at a slightly lower pressure (11.6 psi) than my other stove top pressure cookers (15 psi), but that just means adding a few minutes to the cooking time. My general rule of thumb is to increase cooking times by 7 to 15% when using my Instant Pot for a pressure cooker recipe. And when I want to get precise, I refer to my friend Laura Pazzaglia’s wonderfully comprehensive Hip Pressure Cooking website and her charts for specific cooking times. If you’re at all a fan of pressure cooking, I suggest that you do the same. 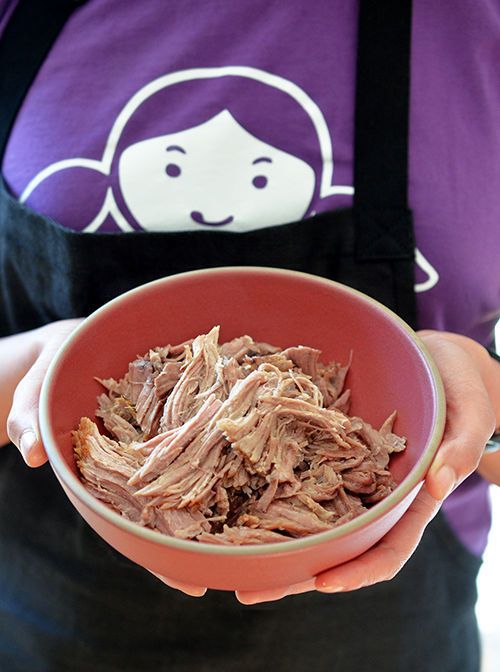 So with all of that out of the way, do you want to see how I’ve modified my Slow Cooker Kalua Pig recipe to work in a pressure cooker? I’ve even thrown in a head of cabbage at the end—just like with traditional Hawaiian kalua pig plate lunches!—so you can enjoy some veggies with your mountain of pork!

Whether you use a stove-top pressure cooker or an electric one, the process is pretty much the same. As noted above, the only difference is that the cooking time will be slightly shorter with an stove top cooker than with an electric cooker (e.g., 75 minutes vs. 90 minutes).

First things first: Drape three pieces of bacon on the bottom of your Instant Pot. Press the “Sauté “button and in about a minute, your bacon will start sizzling. (If you’re using a stovetop pressure cooker instead, line it with three pieces of bacon, crank the burner to medium, and start frying your bacon.) 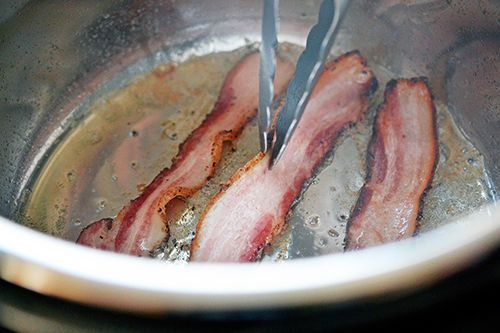 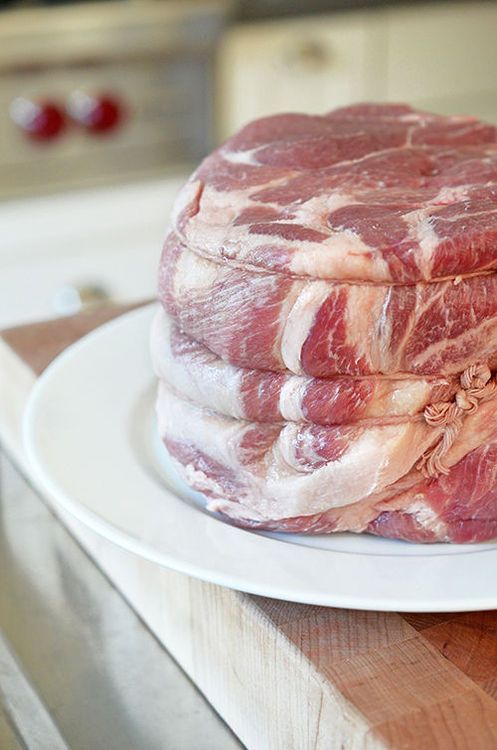 …and slice it into three equal pieces. I normally cut out the piece with the bone first, and then cut the two other pieces to match the first. 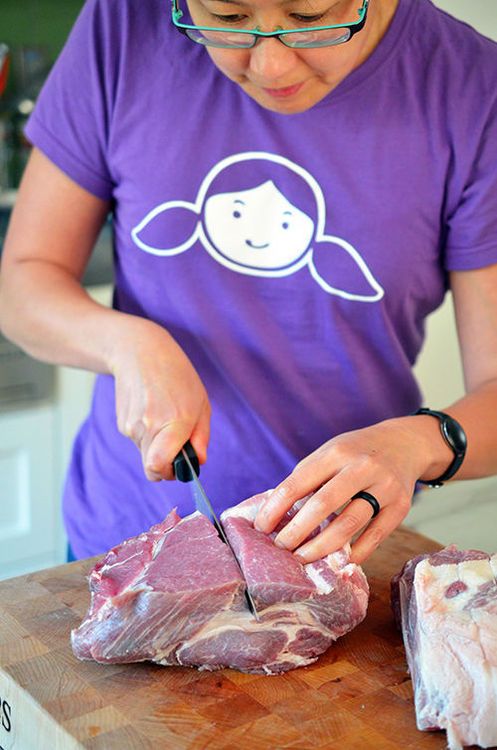 If you’ve got some garlic on hand, use it! With a sharp paring knife, stab a few slits in each piece of pork, and tuck in the garlic cloves.

With most recipes, I liberally salt my roasts like it’s raining catsand dogs. But because the pressure cooker can concentrate flavors (including saltiness), I carefully measure out the amount of salt I use. For this recipe, follow Judy Rodger’s rule of thumb: use ¾ teaspoon of medium-coarse salt for every 1 pound of meat. (Using fine salt? Use about half that amount.) 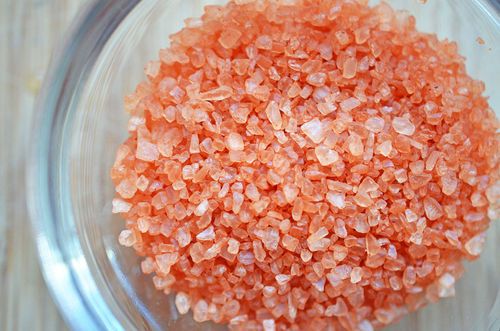 Sprinkle the salt evenly over the pork. No Alaea salt? Replace it with smoked salt or good ol’ kosher salt. I won’t tell.

As you’re seasoning the pork, you’ll hear the bacon sputtering in the pressure cooker. Don’t forget to flip the slices, and turn off the heat when the bacon is browned on both sides.

Place the salted pork on top of the bacon, keeping the meat in a single layer. 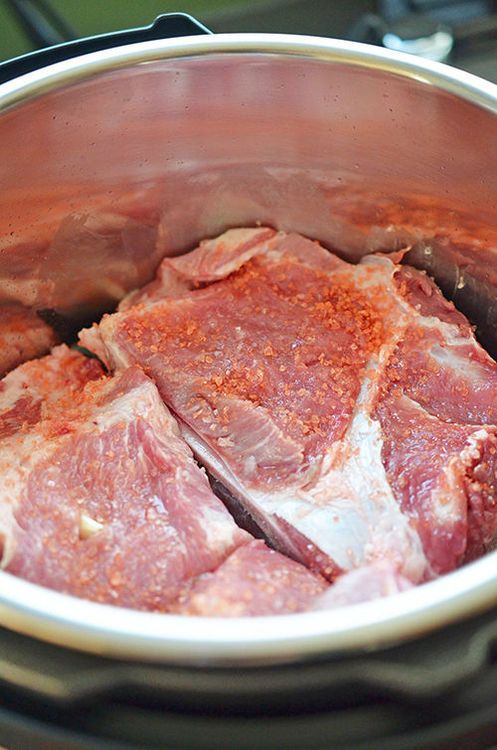 Pour in the water.

DO NOT FORGET THIS STEP. With my Slow Cooker Kalua Pig recipe, I tell folks not to add any liquid. But with a pressure cooker, you have to add some liquid for it to work properly. Check your manual to see what the minimum amount of liquid is for your particular model, and adjust accordingly. (After some digging and experimenting, I discovered that 1 cup of water is perfect for this recipe in my Instant Pot.)

Next: cover and lock the lid. 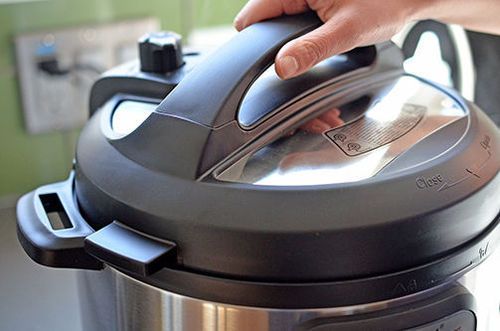 If you’re using an Instant Pot, select the “Manual” button and press the “ ” button until you hit 90 minutes. Once the pot is programmed, walk away.

If you’re using a stove-top pressure cooker, you won’t have to worry about pressing all those fancy buttons. Just cook on high heat until high pressure is reached. Then, reduce the heat to low to maintain high pressure for about 75 minutes.

When the stew is finished cooking, the Instant Pot will switch automatically to its “Keep Warm” mode. If you’re at home, press the “Keep Warm/Cancel” button to turn off the cooker and let the pressure come down naturally quicker.

If you’re using a stove-top pressure cooker, remove the pot from the heat. In either case, let the pressure release naturally (which will take about 15 minutes).

Once the cooker is depressurized, check that the pork is fork-tender. If the meat’s not yet fall-apart tender, you can always cook the pork under pressure for another 5-10 minutes to get the right texture.

Transfer the cooked pork to a large bowl, and taste the cooking liquid remaining in the pot. Adjust the seasoning with water or salt if needed.

…and add them to the cooking liquid.

Replace the lid and cook the cabbage under high pressure for 3-5 minutes. When the cabbage is done cooking, activate the quick release valve to release the pressure.

While the cabbage is cooking, shred the pork.

Once the cabbage is cooked, pile it on your shredded pork.

This is a game-changer, people.

Looking for more recipes? Head on over to my Recipe Index. You’ll also find exclusive recipes on my iPad® app, and in my cookbook, Nom Nom Paleo: Food for Humans (Andrews McMeel, December 2013)!

Will be used in accordance with our Terms of Service
More posts from Nom Nom Paleo
Add a blog to Bloglovin’
Enter the full blog address (e.g. https://www.fashionsquad.com)
Contact support
We're working on your request. This will take just a minute...
Enter a valid email to continue