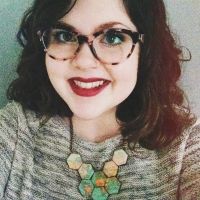 Hi, everyone, and welcome back to Shattering Stigmas! Today, I have my first guest post of the event. Without further ado, I’ll hand it over to Yvonne for some advice on writing characters with mental illness!

(P. S. Be sure to check out the masterlist of Shattering Stigmas 4.0 posts so that you don’t miss any content from our five wonderful hosts!)

This initially started off as an article about other people’s work that depicts characters with mental illnesses, but, in the middle of it, I thought that I was being rather hypocritical, as a friend pointed out as well. I am a writer, and I have written characters with mental illnesses. Shouldn’t I start by placing my own head on the chopping board? Disclaimer: this isn’t an advert for my work. I actually think this is going to go quite the opposite of praise.

Little bit of backstory here: I started writing stories featuring themes of mental illnesses because I realized that I almost always didn’t use to read such stories anywhere, and, whenever I did, it usually ended up that the mental illness was used as a trope. So I decided to change that. As someone who suffers from anxiety, I wanted to see myself represented more and if they weren’t going to do it then I would do it myself. And do it myself I did. Did I live up to my expectations? I don’t know. Let’s find out.

The Tale of The Ragged Young Boy starts with a girl, whose name we later learn to be Sheryl, being drawn to this ragged young boy who’s standing with his hand outstretched, begging for money. Sheryl approaches the boy and has a conversation with him and ultimately feels pity for him. She gives the boy some money and the boy leaves. But then, Sheryl’s friend, Danny, approaches Sheryl and asks her if she’s okay, breaking the news to Sheryl that she had been talking to herself all that time. Sheryl is shocked because there was a boy, a ragged young boy. But alas, Danny was telling the truth. The story ends as a crowd gathers and what had happened dawns on Sheryl.

First thoughts: the story could have been a little longer, and the characters could have been more developed. The scene could also have been set more clearly. That said, even though it was clear in my mind that I was telling a story about schizophrenia, I never actually mentioned the illness in the story, and that was intentional. I had just begun doing this series, and I intended to write a couple of more stories revolving around mental illness before I finally broke the news to the people who hadn’t really gotten it yet. How do I put it – I was trying to explain what it was without using the name, which is why the story should have been longer and the characters should have been more dimensional. Or perhaps several installments to the story so that people can understand where I was going was it. What is going on with Sheryl? Will Sheryl be okay? How does Sheryl cope? How often does this happen? Does she face any stigma? Who is Sheryl outside of her diagnosis? There were so many things that I actually did not get around to.

Final thoughts on The Tale of The Ragged Young Boy: interesting idea but the execution needs a little bit more work.

Next, The Girl at The Door. The Girl at The Door starts with a girl named Carla. Carla is in class and the bell goes to head back to the dormitories. She and her friend Jordin leave for the dormitory but they get distracted by a crowd that had gathered a few steps away from the classroom. It turns out that the crowd was bidding on a book, Carla’s book, and the bidding was initiated by a girl by the name of Gretel. However, the three of them, Carla, Jordin and Gretel, get caught by a teacher, Mrs. Pickett – the rest of the crowd managed to disperse – and are sent to the detention centre for being at the wrong place at the wrong time. At the detention centre, Gretel sees some sort of apparition, starts screaming, and convinces the others that they can see the apparition too. The apparition is a girl and she is at the door; she is very pale, her eyes have only eye whites, and she is in a white dress that is billowing in the wind. However, this whole thing turns out to be a dream when Carla wakes up confused and drenched in sweat, asking what happened to Gretel. Jordin reminds her that Gretel is still away in a mental hospital due to schizophrenia. The girl at the door appears again, but this times, with non-pale skin and healthy eyes. The girl smiles at Carla and says, “She chose you.”

First thoughts: once again, the story could have been a little longer, and the characters could have been more developed. What is going on here? What is going on with Gretel? What is going on with Carla? What is going on? Who is this girl? My vision for this was quite different from the first story. In The Tale of The Ragged Young Boy, I was going to take an educative stance about schizophrenia. However, in The Girl at The Door, I was going along a more entertaining route, incorporating some elements of horror, and schizophrenia wasn’t going to be a main topic of discussion but rather something that happened to be there. Like a story about person with anxiety versus a story with someone who just so happens to have anxiety.

Overall thoughts: with all the awareness being created about mental health and mental illnesses, over the years, representation for people with mental illnesses has gotten better and better. I have definitely seen some books/films that have gotten pretty close to accurate in their portrayal of mental illnesses. I can only hope that one day, I can do the same. As for why I chose schizophrenia for my first stories featuring characters with mental illness: schizophrenia had, and still has, a bad rap, and I wanted to change that. I wanted to shatter the stigma. I definitely did get people talking, but, looking back at these stories now, I definitely could and should have done more. I don’t know why I ended both stories suddenly.

Thanks so much for this post, Yvonne! Be sure to leave some love in the comments.

Yvonne Wabai is a young Kenyan writer and scientist. Find her online through the links below.

View original
This post is tagged in:
Save
1 love
Subscribe to Novel Ink
Get updates delivered right to your inbox!

Will be used in accordance with our Terms of Service
More posts from Novel Ink
Add a blog to Bloglovin’
Enter the full blog address (e.g. https://www.fashionsquad.com)
Contact support
We're working on your request. This will take just a minute...
Enter a valid email to continue