One Good Thing By Jillee

This Powerful Shower Cleaner Does All The Dirty Work For You

If there’s one cleaning task I used to put off the most, it was definitely cleaning the tub and shower. It felt like it took forever! And it never ended up feeling or looking as clean as I’d have liked it to, even after repeated scrubbing. After a while, I was starting to suspect that our hard water was combining with the soap scum to form an impenetrable layer of super-scum that simply couldn’t be cleaned. (Not true in the slightest, it made me feel better at the time!)

That was up until I read about an easy homemade shower cleaner that promised to erase tough stains, soap scum, and hard water deposits. And it wasn’t just one person’s opinion; I was seeing dozens of rave reviews for this cleaner all over the web! Even though I was still skeptical, I was willing to give it the ol’ college try (especially since I already had the ingredients on hand.)

I mixed up a batch of the homemade shower cleaner and sprayed it liberally around the tub in my boys’ bathroom, which needed some serious help at the time. I let the spray work its magic for an hour or so, and then wiped it down with a sponge and rinsed everything off. And I was honestly shocked! This cleaner had done what so many other bathroom products had failed to do – it had managed to penetrate that stubborn, grimy, super-scum layer to reveal the clean, shiny surface underneath. I didn’t even know it could look that clean! I’ve been using this magic soap scum remover for about 4 years now, and I’ve never looked back. Here’s how you can make your own homemade shower cleaner.

Measure out equal amounts of Dawn soap and white vinegar. (Somewhere between one and two cups of each should be plenty.) 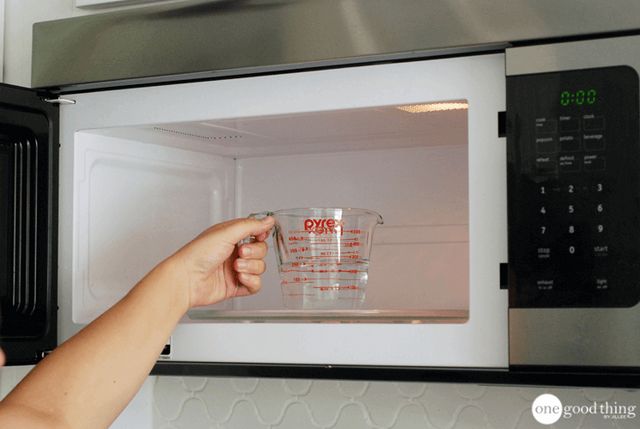 Heat the white vinegar in your microwave until hot, then pour it into your spray bottle. Pour the Dawn soap into the bottle as well, then put the lid on and gently shake to mix.

Spray liberally around your tub and/or shower. Let the mixture sit for 30 minutes to an hour, then scrub (if needed) and rinse well.

When using, make sure your bathroom is as well-ventilated as possible. Turn on the fan and open any windows, because this stuff is POTENT. It smells really strongly of vinegar right after spraying it, but the smell does dissipate fairly quickly. If you really can’t stand the smell of vinegar, you could throw a bandana around your mouth and nose while you’re using the cleaner. But the end result is well worth it, I promise! 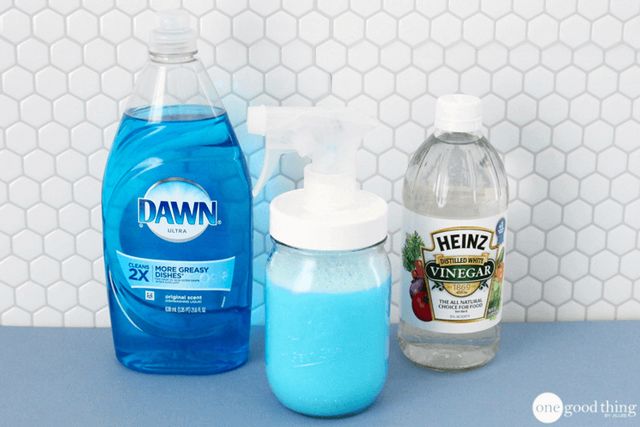 This homemade shower cleaner works so well because it’s actually two cleaners in one! White vinegar can eliminate odor, dissolve tough messes, and remove stains, and do about a hundred other things, too.

Read More: My Top 50 Favorite Posts Using One Of My Favorite Things – Vinegar!

Dawn dish soap cuts through stubborn grease and grime like nobody’s business, and it has almost as many uses as vinegar! The soap also makes the homemade shower cleaner thicker, so it clings to the walls and floor of your tub and shower, rather than running right down the drain.

Read More: 28 Ways To Use Dawn Dish Soap That Will Make Your Life Easier

Happy cleaning, and enjoy your sparkling tubs and showers! :-)

View original
This post is tagged in:
Save
143 loves 94 saves 6 comments
Subscribe to One Good Thing By Jillee
Get updates delivered right to your inbox!

Will be used in accordance with our Terms of Service
Forgot Password?
Subscribe to One Good Thing By Jillee
Get updates delivered right to your inbox!

Will be used in accordance with our Terms of Service
More posts from One Good Thing By Jillee
Add a blog to Bloglovin’
Enter the full blog address (e.g. https://www.fashionsquad.com)
Contact support
We're working on your request. This will take just a minute...
Enter a valid email to continue