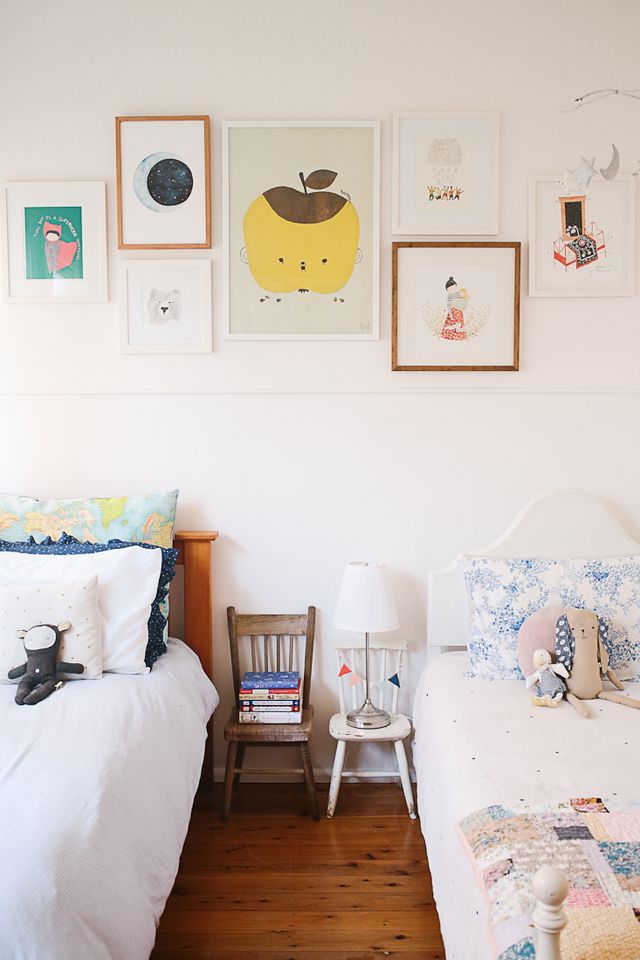 When we moved three months ago we never intended for the children to share a room. Like our old house, we have three bedrooms, so it seemed natural to replicate the sleeping arrangements. But within a few days of moving in we realised that an office would allow us to keep our living areas relatively free of technology; a projector, projector screen, trestle table and computers demand a lot of attention in a light, white space and we didn't want to sacrifice the calm of our favourite room.

Yes, we were doubtful. There is close to four years between Che and Poet and their needs are very different. However, we don't believe that young children need their own space; there's a lot to be said for sharing and actually being together, especially when small, simple living is our priority; for now and the future.

Che wasn't overly enthusiastic at first but we explained that we'd see how it went and discuss it a few weeks later. For the record, the discussion was never required. Just last week he admitted that he really loved sharing a room with Poet. "We get along better now," he said.

In regards to sleeping habits, there has never been a problem. Poet falls asleep soon after her bedtime story and Che will read for an hour afterward (we got him a little clip-on LED lamp from ikea - attached to his bedhead - so Poet's side of the room stays relatively dark - it's the only "new" item we purchased for the room). Poet probably sleeps more contentedly with Che in the room as she doesn't come into our bed nearly as often as she did in the old house (although come 6:30am every morning, she is snuggled between Daniel and I).

As I have explained in previous posts, we simplified a lot during our move. Subsequently, we only kept what we loved; including the children's toys, books and games. Most of their toys and books are kept in the front room and board games and puzzles live in the ottoman. On one end of their bedroom is a floor-to-ceiling wardrobe that houses clothes, shoes, dress-ups, linen and plastic tubs of lego. It took me a good few weeks to find a place for everything (and yes, I continued to de-clutter along the way) but now it's relatively easy to keep their room tidy (much easier than keeping two rooms tidy) - when there's less stuff, there's less to clean. To maintain as much visual space as possible, I've intentionally kept the colours quite soft and the decorations simple; white and blue (with hints of pink and floral) ensure the space is playful and unisex.

I didn't have a table that fit the space between the beds and I wasn't keen to buy another piece of furniture. But, I knew that somewhere to put books and Poet's lamp was essential. These little chairs, that originally came from op-shops, are the perfect solution.

We bought Che's bed off ebay about five years ago and it's still in great condition. He has a passion for space so I added a few starry accessories to his side of the room: the Indian door-hanging (poking out from behind the curtain) promises sweet dreams / the giant world map pillow is from My Bearded Pigeon / blue star pillow from Fabrik / linen gold star cushion from Hello Milky / oobee soft creature from Maze & Vale / pinstripe bedspread found at an op-shop / green "every boy is a superhero sometimes" print from Ashley G / moon watercolour from Lauren Merrick / "bear of few words" from Seventy Tree. 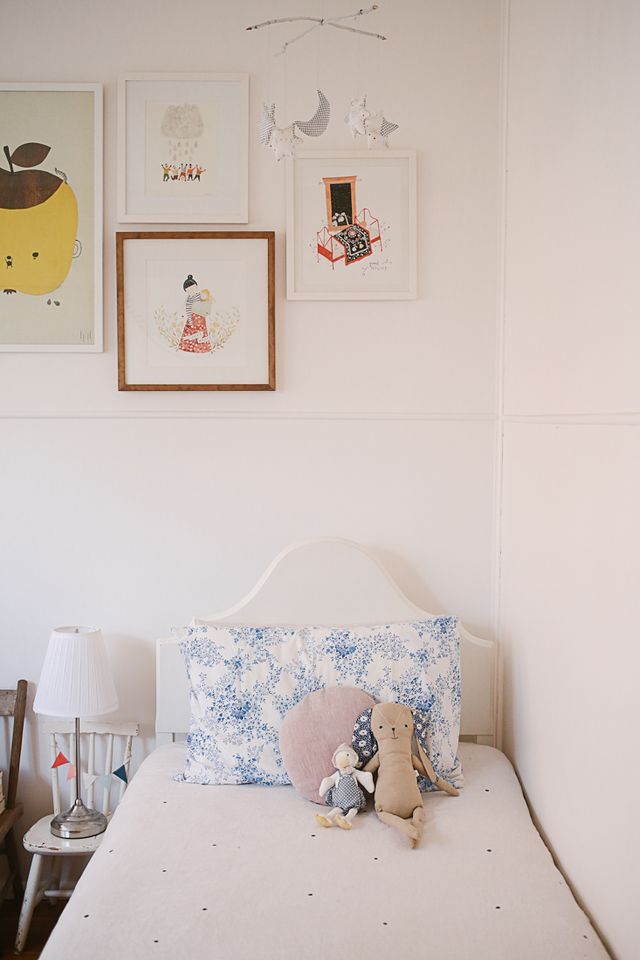 Poet's bed was a hand-me-down from her auntie / I always use vintage floral sheets and pillowcases, found over many years of op-shopping / linen quilt cover round, pink cushion from Hello Milky / patchwork quilt from Maggie & Sparrow / linen rabbit from Tiny Happy / Patsy Duck from Entropy / stars and moon mobile from Made by Mosey / bed personalised Jodi Poet print from Rebekka Seale (sadly, no longer available) / raindrops print by Sandra Juto / Apple Papple by Fine Little Day from The Greater Good.

View original
Save
28 loves 9 saves
Subscribe to Practising Simplicity
Get updates delivered right to your inbox!

Will be used in accordance with our Terms of Service
More posts from Practising Simplicity
Add a blog to Bloglovin’
Enter the full blog address (e.g. https://www.fashionsquad.com)
Contact support
We're working on your request. This will take just a minute...
Enter a valid email to continue