Remodelista: Sourcebook for the Considered Home

British 20th century industrial designer David Mellor may be best known for his classic cutlery, but his interests extended beyond forks and knives. As Stephen Bayley wrote in the designer’s obituary in the Guardian in 2009, “To Mellor, the profession of design was concerned not just with making objects but just as importantly with making choices, with choosing what we use, choosing how to live.’ ”

In 1960, Mellor commissioned his first building from architect Patric Guest of Gollins Melvin Ward, a low-rise glass and timber house, workshop, and studio in Sheffield where he produced his designs; when he got married in 1965, he added two additional bedrooms.

Join us for a tour of the house, now a Grade II listed building owned by a midcentury enthusiast who has kept the spirit of the place intact, and read Mellor’s bio at the Design Museum.

Photography by India Hobson from Haarkon.

Above: The flat roof of the house is a hallmark of midcentury domestic architecture. 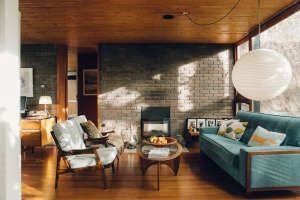 Above: The current owner has filled the house with modern pieces of the period, including several chairs of Mellor’s own design that never went into production. 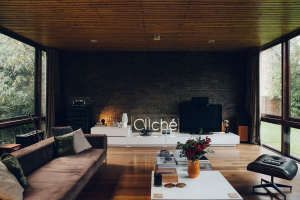 Above: The larger workshop space is now a living room. Machines would have fit through the opening provided by a large wooden doors. Teak framed glass windows which run down both sides of the room would have let light in throughout the day.

Above: A view into the leafy garden.

Above: Wood ceilings and floors run consistently throughout the entire building.

Above: Walls, openings and glazing run from the floor to the ceiling.

Above L: The electric light fittings are all original. Above R: Blinds either offer privacy from room to room or protection from the sun.

Above: The present kitchen was originally the drawing office.

Above: A Cherner chair adds a grace note to the hallway.

Above: One of the bedrooms that was added onto the house in 1965.

Above: An outdoor chair that David Mellor designed for Abacus is just visible at the end of the corridor.

Christine is also the writer of new website Fabulous Fabsters, celebrating women who are FAB — Fifty And Beyond — and sharing their stories.

View original
Save
1 love 3 saves
Subscribe to Remodelista: Sourcebook for the Considered Home
Get updates delivered right to your inbox!

Will be used in accordance with our Terms of Service
Forgot Password?
Subscribe to Remodelista: Sourcebook for the Considered Home
Get updates delivered right to your inbox!

Will be used in accordance with our Terms of Service
More posts from Remodelista: Sourcebook for the Considered Home
Add a blog to Bloglovin’
Enter the full blog address (e.g. https://www.fashionsquad.com)
Contact support
We're working on your request. This will take just a minute...
Enter a valid email to continue