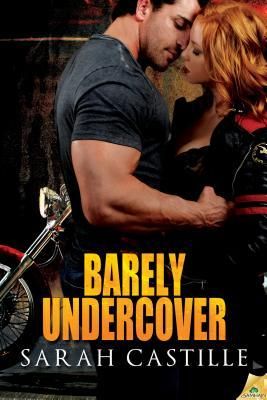 When private investigator Lana Parker follows a dangerous biker into an underground sex club, James Hunter is the last man she expects to see. But there he is, all dark looks and chiseled charms, ready to break her heart all over again.

Danger is the name of the game for an undercover cop. And the last thing James wants is for the fiery beauty to come anywhere near the notorious biker gang he’s trying to take down. Yet Lana has no intention of giving up her case, which means he’ll have to keep her close to keep her safe. A risky proposition-especially when their blazing sexual chemistry reignites an unforgettable passion.

But when a dark terror emerges from the past, Lana goes on the run…and James gives up everything to save her. Backed into a corner, Lana must face her fears, including the one thing that frightens her most…her overwhelming feelings for the man whose searing glance sparks her most hidden desires, the man she should not trust, but cannot resist.

Warning: The book contains violence, explicit sex, light bondage, heavy swearing, motorcycle sexytimes, bad-ass biker naughtytimes, and an exceptionally hot hero who will get down and dirty anywhere but under the covers

I loved this book! Seriously, it’s been sitting on my to-be-read pile for way too long and I’m so mad at myself for taking so long to read it. It was a fast paced story with tons of heat and very likable characters. Barely Undercover is the second book of the Legal Heat series, but I read it as stand-alone. This didn’t hinder the story at all. However, I really want to go back and read the first book now just because I enjoyed this one so much!

Lana Parker is a private investigator and a danged good one. She lets nothing get in her way when it comes to helping the person she’s representing. So, when the wife of the leader of a notoriously bad biker gang asks for her help, to catch her husband cheating on her so she can get custody of their daughter and leave him once in for all, Lana jumps right in with both feet. Lana completely ignores the fact that this job triggers old fears that she has worked hard to bury. However, when Lana runs into the man that walked away from her years before taking her heart with him she questions everything she thought she knew about him. He still makes her heart beat fast, her knees go weak and her girly parts go all a tingle, but things aren’t what they seem and this makes her question everything she believed.

James Hunter cannot believe his eyes when Lana comes walking into the underground sex club that his biker gang frequents. She’s everything he remembers and James wants nothing more than to get her clear of the gang and keep her safe. But, some things never change. Lana refuses to give up her case, so James sees no other option than to claim Lana as his “old lady” and bring her right in the middle of the danger. This seriously complicates everything. He’s been undercover trying to infiltrate this biker gang and is so close to taking them down.

I loved James and Lana. Lana was a strong chick, but she had a vulnerable side. Granted she tried to hide it, but that was because she was trying to protect the ones she loved. James, also, had a protective streak which caused him and Lana to constantly battle one another. The push and pull between them was fun to read and endearing not annoying and self-punishing. I will be looking forward to more books in this series..

View original
Save
1 love
Subscribe to Riverina Romantics
Get updates delivered right to your inbox!

Will be used in accordance with our Terms of Service
More posts from Riverina Romantics
Add a blog to Bloglovin’
Enter the full blog address (e.g. https://www.fashionsquad.com)
Contact support
We're working on your request. This will take just a minute...
Enter a valid email to continue