Heyday Dungarees of my Dreams

This exact outfit is all I'm interested in wearing at the moment. It's my mumiform, and the rest of my wardrobe may as well go on holiday. You've seen my stripy Gable top many times before, so let me introduce you to the new element.

(image source: Beaton Linen)
So it went down like this... Frankie and I are regulars at a playgroup that is also attended by this cool mama called Seonid (pronounced Shona). She made me aware of the overalls by Beaton Linen (pictured above and below) via Instagram after seeing me rock my Burnside bibs, thinking I'd appreciate them. She wasn't wrong, and I couldn't stop thinking about them. 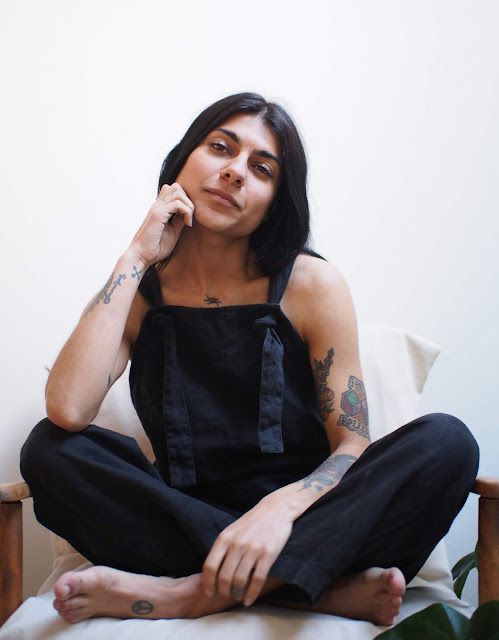 (image source: Beaton Linen)
Pattern:
Shortly after discovering the Beaton Linen overalls, I received an email from the Made by Jack's Mum pattern company announcing the release of their new women's 'Heyday' dungarees pattern. They were even offering a 20% discount for the first week or so after it dropped. Despite the discount and their obvs similarity to my inspiration source, I hesitated for a couple of days. I feared that they'd make me look a bit too ceramics-evening-class-tutor. As I have discussed before, my style seems to be travelling towards Art Teacher chic, and I was concerned that this garment would seal that fate. But, ultimately, the pull of linen dungers was too strong and the purchase was made.

The sizing range of this pattern is very generous, running from XXS to 5XL. The size chart put me as a Small which I wasn't entirely convinced about, so I added an additional 1cm to the side seams in case I wanted to adjust the fit (I wasn't making a toile). The seam allowance of this pattern is 1cm, which I enjoy sewing with, but wouldn't have left me enough wiggle room to take them out. I did end up giving myself slightly more room by letting them out at the side seams around the hip/bum area.

Aside from adjusting the fit slightly for my booty, the only deviation I made from the pattern was to draft new front hip pockets. The pattern includes two pocket pattern pieces; one larger pocket for the bib, and four smaller pockets (two for the bum, two for the front hip). I wanted a slightly different look at the front, so I used the hip pocket piece I drafted for my black denim Cleo pinafore, but folded the bottom corner in to reflect the shape of the other pockets on the dungarees. Unlike with my Cleo, this time I remembered to apply some twill tape to the pocket opening so I can shove my hands in these ones as often as I like without fear that they'll stretch out.

I fell in love with this linen twill from Fabric Godmother after sewing with and wearing it as my York pinafore. The weight, feel, movement and even how it fades slightly made it my number one choice this dungarees project, and I don't regret a thing.

As I already said at the top of this post, I adore these dungarees. After the minor tweaking, I think the fit is bang on, and they are so comfortable that I don't even want to change out of them into some 'lounge wear' for relaxing in the evening, which I normally always do. I even think that I prefer them to the Beaton Linen ones, which look a bit too short and wide towards the bottom of the legs for my liking. Which is handy, because those Beaton ones are $270 a pop. I definitely plan to make another pair in a cotton/linen mix next spring.

View original
This post is tagged in:
Save
22 loves 6 saves
Subscribe to 'So, Zo...'
Get updates delivered right to your inbox!

Will be used in accordance with our Terms of Service
More posts from 'So, Zo...'
Add a blog to Bloglovin’
Enter the full blog address (e.g. https://www.fashionsquad.com)
Contact support
We're working on your request. This will take just a minute...
Enter a valid email to continue