OMG. Magical sweet balls of glory. Glorious magic balls of sweetness. Sweet balls of magical gloriousness. Call them what you want: these are INCREDIBLE. The glaze is sexy, the donut holes are moist and flavourful, the whole package is a winner.

The last couple days my brain has been positively itching to make donut holes and I finally did so after the gym this afternoon. They could not have turned out better. I will say: they aren't really like conventional donut holes, but as I said in my interview on The Sexy Vegan Podcast the other day, any raw / vegan recipe inspired by a cooked / non-vegan one (like burgers, pizza, cake, etc.) isn't ever going to be able to replicate exactly what you're going for. What the raw / vegan version WILL do is give you *similar* satisfactions PLUS make ya feel physically energized afterwards, instead of sluggish or weird. In my opinion the healthier vegan versions of recipes are usually even better in taste, and the fact that they make you feel GOOD really makes a difference.

When I want mac and cheese what I really want is a creamy, salty, warm, carb-filled party in my mouth. I don't have to use dairy. So I create my own cheese sauce from nuts and veggies with lots of flavour and throw it all on some whole grain pasta. Voila. Same for this donut hole recipe here: I want something sweet, decadent, bite size and covered in a sticky, sugary glaze. VOILA. They might not be as light or fluffy as their baked and fried, white flour-filled counterpart but damn they are delicious in their own right, and they're essentially just power bars in the shape of balls. The ingredients are oats, nuts, dried fruit and coconut, but they end up turning out like a rich dessert or daytime treat. I am really excited about this recipe and will be making it again and again in the future. These were inspired by Lee Tilghman's recipe, which is even simpler than mine. Get it here. (P.S. her whole blog and IG account are gorgeous). Enjoy, lovelies. 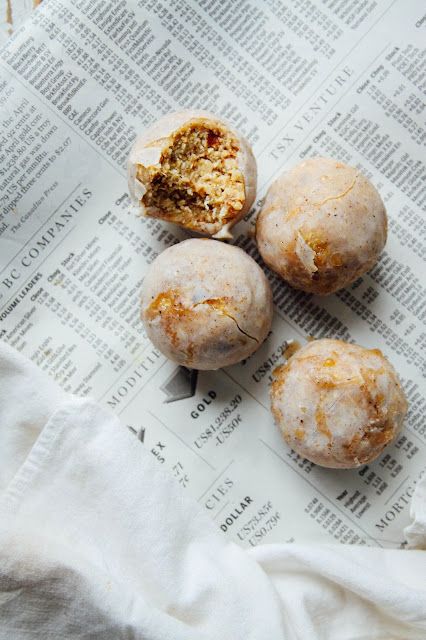 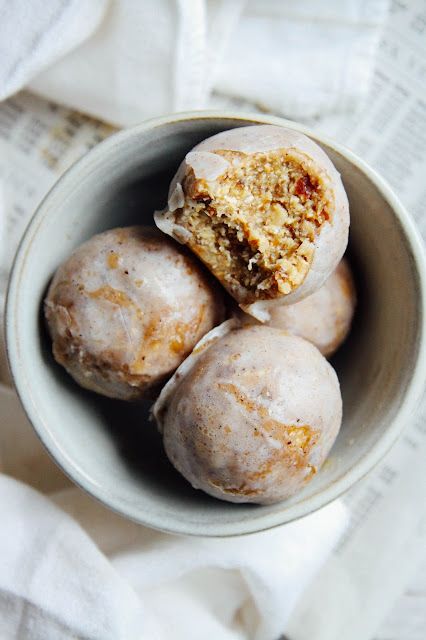 To make the dough: grind all the ingredients into a thick, moist dough in a high speed blender or food processor. Roll into balls and put in the freezer until cold and firm, around 20 minutes.

To make the glaze: melt the coconut oil on low heat, turn off the heat then whisk in the syrup and vanilla. It will take a second or two but pretty quickly it'll combine into a thin caramel-y consistency. Dip the solid donut holes into the glaze, covering each one completely. Put them back in the freezer until the glaze has hardened, then repeat until you use up all the glaze (you will probably have to re-whisk the glaze every time before re-dipping). I dipped them and put them back in the freezer three times total. Store the donut holes in the fridge for up to a week.

View original
Save
60 loves 144 saves
Subscribe to This Rawsome Vegan Life
Get updates delivered right to your inbox!

Will be used in accordance with our Terms of Service
More posts from This Rawsome Vegan Life
Add a blog to Bloglovin’
Enter the full blog address (e.g. https://www.fashionsquad.com)
Contact support
We're working on your request. This will take just a minute...
Enter a valid email to continue