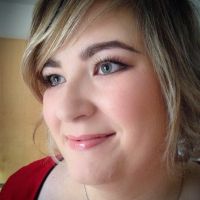 The View from the Circle


In 2018, I'd say I spent a notable percentage of my blogging life on trains between Shepherds Bush and the particular bit of Commuterland I live in, iPad balanced precariously on my knee, penning rave reviews of shows at the Bush Theatre. Like, at least 10% if I had to quantify it. I'm therefore somewhat shocked that it's taken until February for this situation to occur in 2019.
For, yes, once again my Bush stan hat is firmly on. Their latest commission, co-commission technically, is Babylon Beyond Borders which, it's more than fair to say, is the most technically ambitious piece of theatre (it's definitively not a play, even show doesn't feel quite right) I've ever seen. Performed live in four separate theatres, in four separate cities (São Paulo, Johannesburg, New York and London), in four separate countries, on four separate continents, in four separate time zones, in more languages than I could count. Obviously, the London audience watches the London section live and the others on a video screen, live streamed via t'interwebz in real time. The potential for technical difficulties is overwhelming. This is not theatre for the faint hearted and it is precisely zero shock to me that it's the babes at the Bush who've decided to have a crack at it. 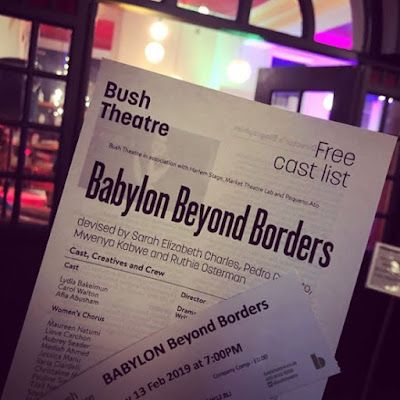 There's not a plot, though there are many stories. Thematically, the idea couldn't be more timely: the destruction of towers throughout history (from Babylon to Grenfell) as a catalyst and metaphor for the destruction of language and community and an excuse to generally shit all over anyone who is in any way 'other'. It's not subtle. Each segment tells personal stories, heavy on political outrage and pulling no punches as to who's to blame. They're funny too when that feels right. The 'Brexit as flight safety information' segment in the London bit is honestly the most I've laughed on that topic for a long old time.
Let's talk about the London section, since that was the bit I saw live and in my clearly hugely biased opinion the best bit. Taking Grenfell as their tower story and then the awful disunity caused by Brexit as a wider theme, even as a standalone piece of work it's fantastic. Three professional actresses (Lydia Bakelmun, Carol Walton and Afia Abusham - all brilliant) are joined by a community company of local KICKASS women from all kinds of backgrounds who live locally in Shepherds Bush. I'm not normally someone who jumps for joy at the phrase 'community company' but my goodness it works so well here. All of these amazing, talented women sharing their stories and their dance moves is a joyful sort of chaos that I am so here for. I cried a bit each time they appeared. From an American lady complaining that the British make terrible iced tea (true) to the painful variety of stories of struggling with joint British and not British identities, I was left with a very real sense that this is what theatre should be. Fewer white men, more technicolour women.
A show this technically nuts, frankly, was always going to have some issues and it's a shame that the tech let the show down a bit during the New York tower story (the towers in question being, of course, the World Trade Centre) when I saw it. I did miss this portion because I feel like the clearly astonishingly talented American singer-actress - of colour - who was telling it had something important to say. But otherwise I was amazed how smoothly director Ruthie Osterman's production came off almost as much as I was by the imagination and vision to conceive it in the first place. Live stream producer Heather Pasfield also surely deserves some kind of medal for pulling - and holding - it all together. She must have the most stressful job in theatre!
Babylon Beyond Borders is an absolutely superb piece of theatre: completely relevant, so ambitious and pulled off so well. It's also, I would quickly observe, pulled off by a nearly 100% female cast and crew (lighting designer Rajiv Pattani being the token man in the credited team, though the uncredited camera operator keeps him company). On all counts, more of this please.
Babylon Beyond Borders in at the Bush Theatre until 16th February. Which is this Saturday. Sort yourselves out tickets immediately.
My ticket for this one was kindly provided by the Bush and I attended press night. It would otherwise cost you £15. Seating is unreserved - and on press night at least they were frantically bringing in extra chairs from the bar - so sharpen your elbows and get there early.

View original
This post is tagged in:
Save
Subscribe to The View from the Circle
Get updates delivered right to your inbox!

Will be used in accordance with our Terms of Service
Forgot Password?
Subscribe to The View from the Circle
Get updates delivered right to your inbox!

Will be used in accordance with our Terms of Service
More posts from The View from the Circle
Add a blog to Bloglovin’
Enter the full blog address (e.g. https://www.fashionsquad.com)
Contact support
We're working on your request. This will take just a minute...
Enter a valid email to continue