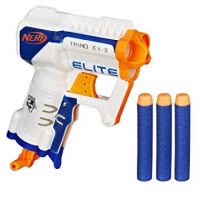 Some people think that nerf shotguns are not much powerful, but that's not true. Nerf Shotguns are very powerful and they can lead you straight to the victory. If you are searching for a powerful and easy to use nerf shotgun then you have reached the right place. We have done a research on best nerf shotgun to carry on an nerf war and we found several shotguns. Here we provide best of the best nerf shotguns for elder kids, teenagers and adults as follows:

Nerf Vagabond Blaster is a doomlands series nerf gun. It comes with six darts and a barrel to load all darts. It works on pump action blasting, so there is no need of batteries. With slam fire action, you can fire six doomlands darts in a row. This blaster is designed for the hero to fight in a post-apocalyptic world. Pump the handle and pull the trigger to kill all bad guys around with Vagabond Blaster.

Nerf SlingFire Blaster is a powerful shotgun with level action blasting feature. It contains a dart clip to hold six zombie strike darts. You can load the dart clip into blaster to get ready for fighting with zombie hordes. You just need to swing the level down and up, then pull the trigger to fire one dart on your target.

Nerf DoubleBreach Blaster contains two barrels for firing darts. It comes with six mega darts that scream when you fire them. You can hit your enemies at a distance of up to 90 feet. Use its pump action blasting to fire one mega dart at a time or two mega darts in a row. It also has a dart holder on the gun to hold 4 extra darts.

Nerf Rough Cut Blaster is a double-barreled shotgun. It has four rows of two barrels to hold eight darts at once. You should use the pump action to fire steady shots from this shotgun. It is able to fire 2 darts at a time. The blaster comes with 8 Elite darts and tactical rail to add nerf accessories.

Nerf Mega TwinShock Blaster has built-in dart drum. You can load 10 mega darts directly into the blaster. In long range shots, TwinShock Blaster can shoot the target at 85 feet distance. It also features 3 different firing options i.e. one dart, two darts and slam fire. You should use these firing modes as per your needs in nerf mission.

After reading the valuable reviews of all Nerf Shotguns, you will be able to choose a suitable shotgun for yourself. This post is tagged in:
Save
Subscribe to Posts by nerfguncenter
Get updates delivered right to your inbox!