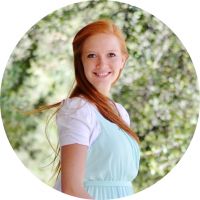 All things bright and beautiful


I have yet to try a curry I didn't like. I love that stuff. Since I've been pregnant, I've been craving Indian and Thai food something fierce, so when I found this recipe on Pinterest I knew I had to try it out. It looked so easy and delicious, and it lived up to my high expectations!

I will absolutely be making this again, and maybe experimenting with turning it into a freezer meal. I really want to stock up on those before this baby comes along in a few months.

All you have to do is puree the sauce, throw it in the crock pot with some chunks of chicken breast, stir in some cornstarch an hour or so before it's finished cooking to thicken up the sauce, and serve over some good rice. I used jasmine, my favorite.

Does it get any easier than that?

I followed the recipe exactly except for a few minor changes. Since I like a lot of flavor I added some extra garam masala, curry powder, and salt. I also substituted a bit of cayenne pepper (somewhere between 1/2 and 1 tsp) for the dried red peppers, just because that's what I had on hand. Last of all, I didn't end up cooking it for the entire 6 hours. I put this in around 8am and the chicken was done (And smelled amazing. Seriously.) when I got home from church a little after 12pm. I added the cornstarch then and let it cook for another hour or so until Dallin got home from his meeting. It's a good thing it was done a little early because we were both really hungry and the smell was tantalizing.
Click here for the recipe! Also, if you have any other favorite Indian/Thai/curry recipes you should do this pregnant lady a favor and send them my way. ;)

View original
Save
2 loves 1 save
Subscribe to All things bright and beautiful
Get updates delivered right to your inbox!

Will be used in accordance with our Terms of Service
Forgot Password?
Subscribe to All things bright and beautiful
Get updates delivered right to your inbox!

Will be used in accordance with our Terms of Service
More posts from All things bright and beautiful
Add a blog to Bloglovin’
Enter the full blog address (e.g. https://www.fashionsquad.com)
Contact support
We're working on your request. This will take just a minute...
Enter a valid email to continue