3 Bookshelf Styling Problems and How to Solve Them 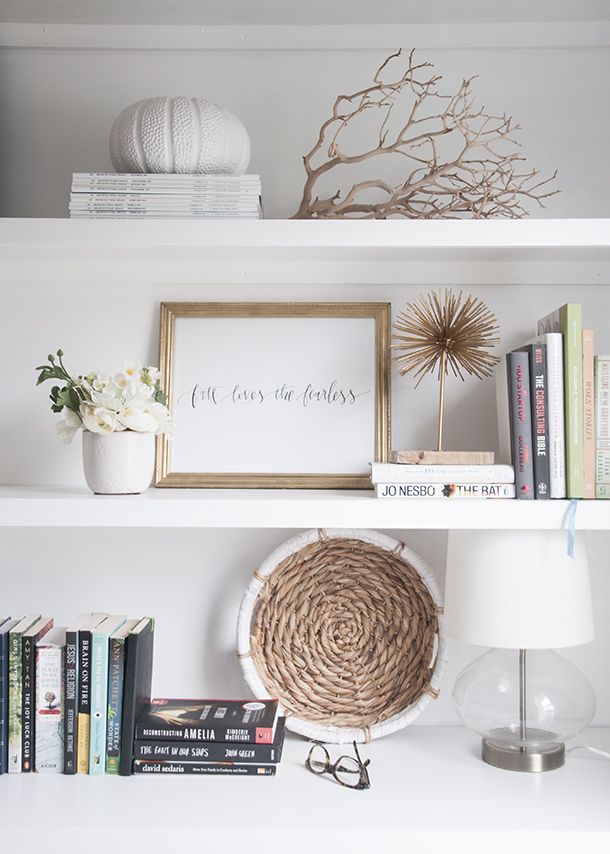 I hear it over and over again… bookshelf styling is a sore spot for a lot of people. It can get pretty overwhelming, I’ll admit, but I’ve found a few good formulas to use to kick bookshelf anxiety to the curb forever.

I’ll show you the three most common problems facing your shelves and what you can do to solve your specific problem. Ready? Let’s go! 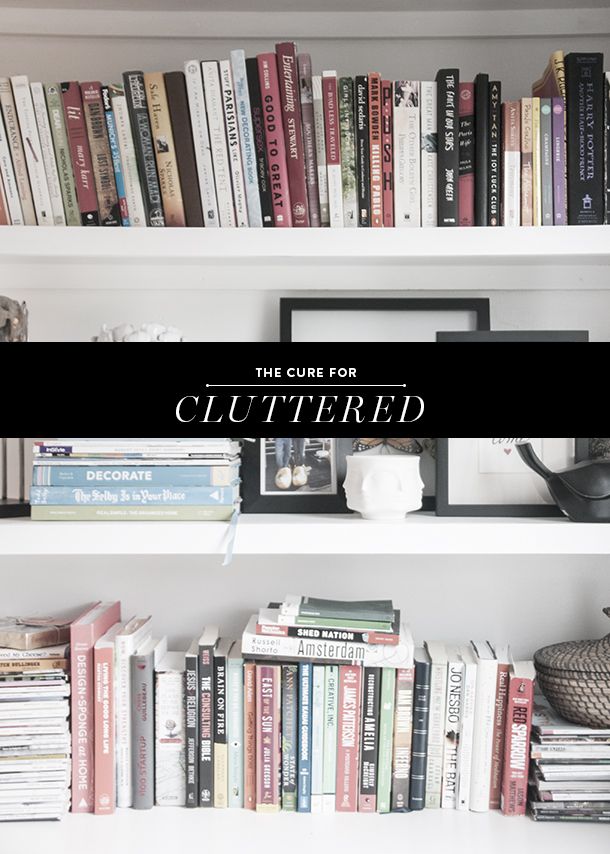 A cluttered bookshelf is a common issue in my house. Not only do shelves get clogged with tons of books (I’m an avid reader) but also with travel guides, maps, magazines, picture frames, and loads of other knick knacks like notecards, notebooks, and empty book jackets. Luckily, solving this issue is pretty easy and is the first step I, myself, took while prepping for this post.

First, clear off the shelves. Get rid of anything that you won’t read again or magazines that you think you’ll read one day… you won’t. Donating books to a school or local donation center will clear your shelves and make you a philanthropic superstar. Now, you’re ready for the big trick.

Create a grid out of your shelves and decorate each section of the grid separately. If you have a ton of books. Feel free to alternate the gridded shelves with shelves that have only books (ONLY BOOKS) spanning the entire shelf.

Above, you can see that I divided each shelf into three sections, creating a grid of 12 imaginary boxes on my four shelves. The top and bottom shelves just got one larger item in the center section. The two focal shelves in the middle have three very clear and distinct segments. Within these sections, alternate the following things:

Make sure not to put the same things right next to each other or right above/below each other. You can see that my vertically lined up books alternate spots on the grid on each shelf. You are definitely use other things (art, photos in frames, plants, etc) as well, but the more variables you add, the more cluttered up it will look again. Be sure to carry a couple of ideas multiple times in multiple places. Like my vertically lined up books used three times and my horizontally stacked books used twice. See how clean & fresh it looks?

But maybe an overflowing of books isn’t your problem. Maybe you have the opposite problem of too few books? 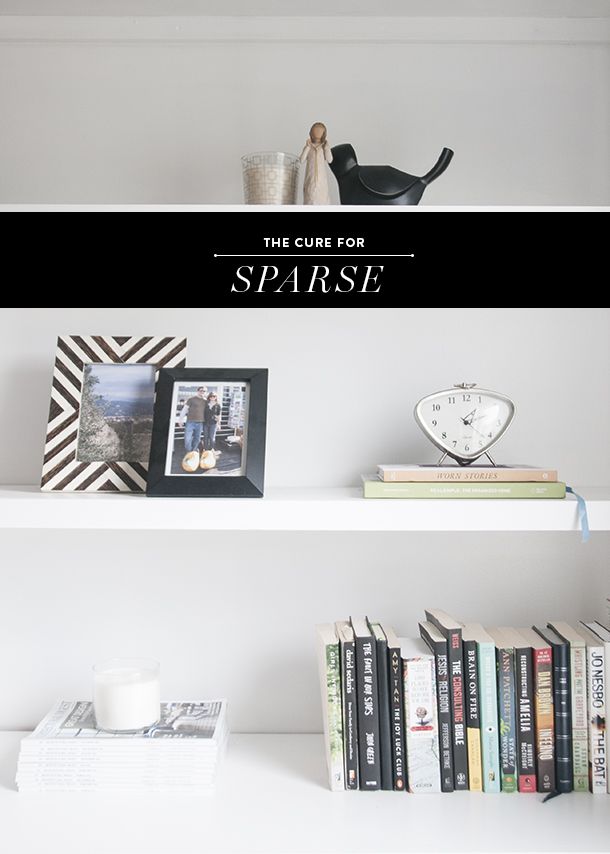 I love the images of shelves full of heavy hardback design books, but let’s face it… design books are expensive! You’ll pay between $25-$50 minimum for each one, which translates to a whole lot of dough just to have a pretty shelf… I have a better solution which lets your grow your book collection organically. Don’t buy books just to fill shelves… that’s silly. The solution is simple (and beautiful).

The picture above has the same exact amount of books as the ‘sparse’ photo, they’re just arranged in a way which takes up a bit more real estate and I’ve make sure the accessories I use take up my visual space as well! For this design, we didn’t use the same grid method as above because we’re trying to take up MORE visual space, not pare back. I started a line of books on both focal shelves coming in from alternate directions, then I ended the line of books with a small stack placed horizontally. Not only does this work as a natural bookend, but it give the illusion that the line of books extends a little further than it actually would. It also gradually leads into the decor objects rather than an abrupt end to the books and an abrupt start to the other objects. I used the same start burst object d’art, potted flower, and basket as in the first design, but layered them a bit more like a relaxed vignette. I also placed the basket on it’s side to be used as a decorative piece and take up more visual space.

For the top shelf, I actually kept the magazines! I think magazines can be used if you’re low on books, but they should be all the same title so that they’re identical widths. Just top them with a more artsy piece! I also added in a branch to take up lots of space and it links back with the natural texture of the basket!

You’ll notice that I also used a lamp in the shelf. I think lamps on shelves are an amazing idea to add soft light in the evenings (especially if your shelves are lit) and also to add a little more uniqueness to the shelves! 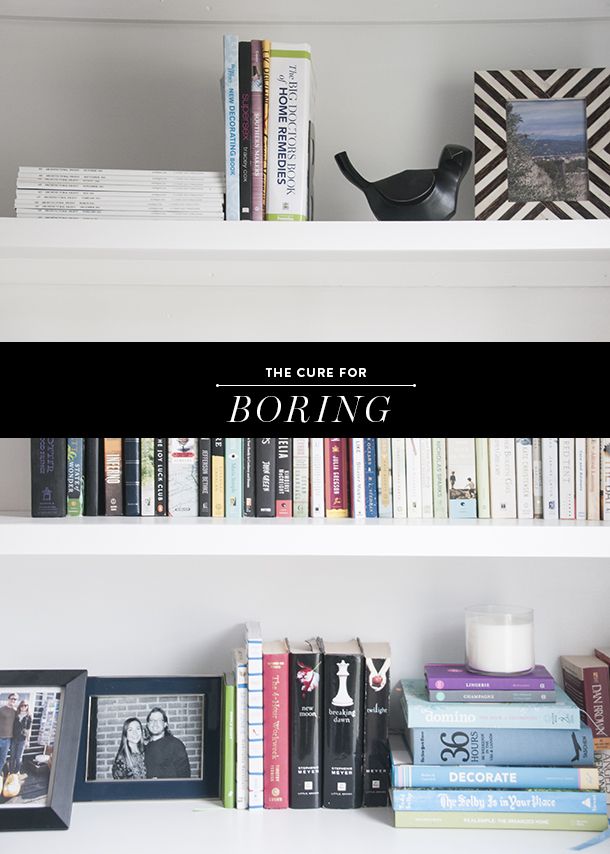 Boring shelves are usually boring because they have a whole lot of the same type of thing. The boring shelves above have a lot of books, all placed together and a lot of family photos in similar sized frames. Sure there is some other stuff mixed in, but it doesn’t ooze style. And the cure is easy using a mix of what we’ve already learned so far! 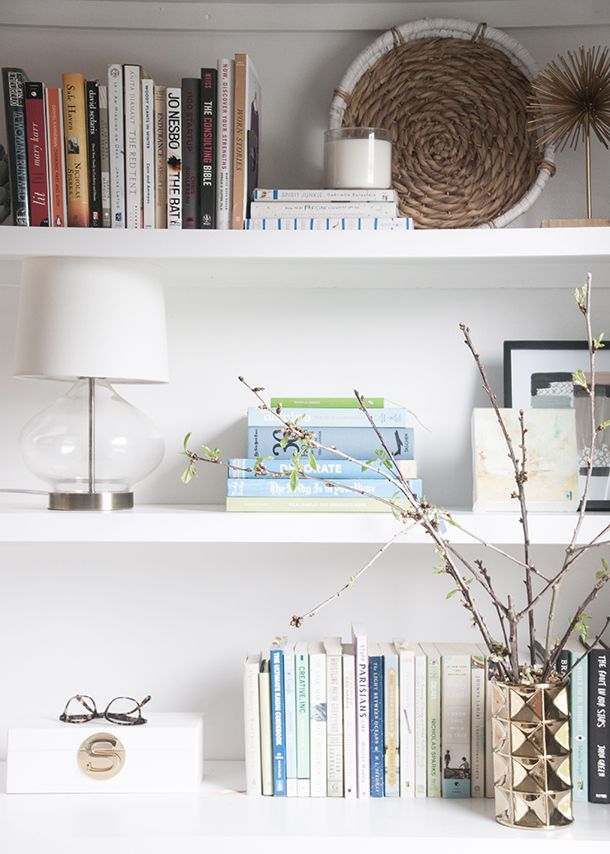 You can see I’ve up’ed the ante a little on this design. There is a plethora of things going on, but it’s still organized. I used a bit of the grid method and a bit of the sparse method and what it creates is a little eclectic, but still stylish and relaxed. A statement is created with a gorgeous sculptural vase filled with branches. You can see that in areas where I have multiple items overlapping, the opposite side of the shelf is simple. Books and a vase with branches overlaps on the first shelf, but it’s balanced by a simple jewelry box on the opposite size. The top shelf does almost the exact opposite as the first shelf creating balance top to bottom as well. Since both the top and bottom shelf have vertically arranged books coming from one side, the center shelf has a horizontal stack right in the middle. If you took everything but the books away, it would still look balanced.

Shelf styling is such a personal thing. There is not necessarily a one-size-fits-all equation, but following some of these steps can definitely help to make the process a bit easier and give you a place to start!

Did you have an Aha! moment? What was the tip you liked the most? Share it below!

The post 3 Bookshelf Styling Problems and How to Solve Them appeared first on Earnest Home co..

Will be used in accordance with our Terms of Service
More posts from Earnest Home co.
Add a blog to Bloglovin’
Enter the full blog address (e.g. https://www.fashionsquad.com)
Contact support
We're working on your request. This will take just a minute...
Enter a valid email to continue