Ok, friends. Welcome to the backsplash post. A lot of y’all have been asking, it just took a while to collate all the info.

For those of you just joining (welcome), here is what our kitchen looked like when we moved in. Workable, but not awesome. 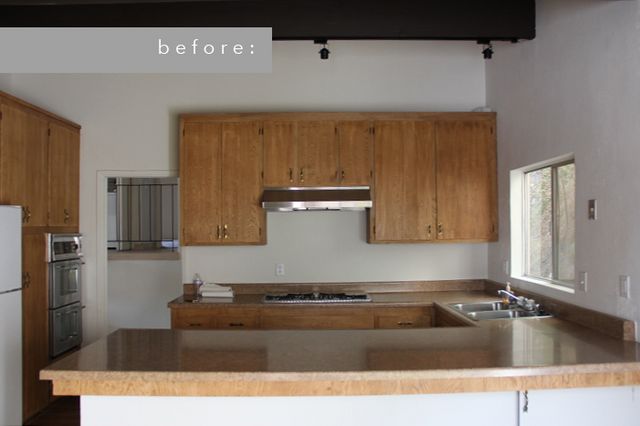 I knew I wanted to upgrade the cabinet finish, put in a backsplash, new appliances, new counter, etc, but not demo it out because the configuration was pretty good. Most of the decisions were fairly easy to make – Caesarstone countertops, pretty white appliances (post coming) but the backsplash? I sprouted four new gray hairs trying to come up with a backsplash that was both simple but interesting; not using crazy expensive materials, but not boring. Also it needs to always be good for resale, but at the same time ‘pinnable’ for now. Its hard. At first I tried this insane mountain scape idea that I still think could work with the right materials, but it also could have looked like amateur garbage.

I love carrara marble (I’m not alone right now in that, clearly) but I’m too irresponsible to have it as my countertop. It looks good aged in a more traditonal style house but ours is midcentury. Besides, I knew that if we had one get together with red wine it would be over. So I wanted to figure out how to bring it into the kitchen and obviously the backsplash is a good opportunity to do that. You can buy it in bricks, squares or in larger tiles that are wildly less expensive that slabs. So I opted for the 12×24 tiles which are roughly $5.50 a square foot and cost us $451 to do the whole lot – we bought 20% overage since we were cutting them (and when you cut you get some casualties) and that price included tax and shipping (shipping is strangely expensive at $80).

But the brass? Yeah, thats not a normal backsplash component. It’s typically used at a ‘floor junction’ in between carpeting and tile – like at the threshold between the kitchen and living room, or bathroom and hallway. Its solid brass and slides underneath the tile – but you get 1/8″ brass strip in between the tile, looking like brass grout. The tile guy thought we were nuts (not for putting it in a backsplash but for opting for brass at all). That side with the holes goes UNDER the tile and the larger brass side (the profile) is butted up against the next tile, so what you see is the top side that is 1/8th inch.

The brass edge trim was by Schluter Schiene from Westside Tile and Stone at a cost of $32.00 per 8′ length. I believe we ordered 12 8′ lengths and had 3 left over. We didn’t really know how many we needed since we were doing a weird pattern (oh and we ordered like 2 days before install and it came from the East Coast so yes, we ordered extra just in case). One of our concerns was the potential of the brass tarnishing but the manufacturer thought it would be ok and said we could polish it as long as we avoided getting the polish on the marble which could potentially damage the surface and take the shine away. So far so good.

We thought about ordering a slab of carrara so that we didn’t have any joint seams and also to try to save on money and material waste but the slab would have been too thick for this application. Our installer ordered the tiles from Discount Tile Center on Venice.

The one on the left is the way the trim is supposed to be installed, but its only 1/8th an inch, which is pretty narrow. The one on the right is flipped, which looked WAY better (1/2″) but we would have had to cut each piece vertically and the install would have been a nightmare. So we installed it properly, but I do regret it not being bigger.

Meanwhile I didn’t want to just use the tiles as is, I wanted to do stripes with them with varying widths. First we tried more of a brick pattern: 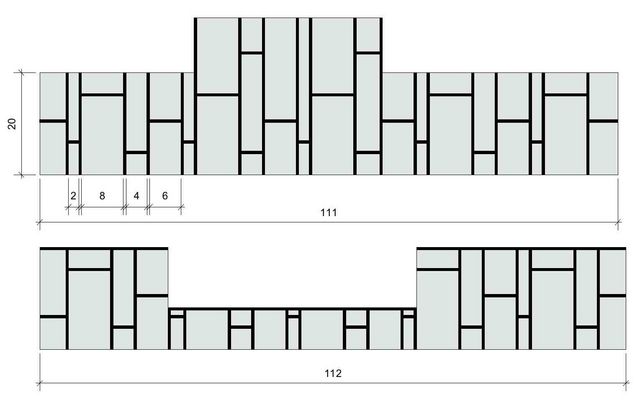 I like it but we thought it would have looked too busy. Now I don’t think so and I think it could look awesome because the brass trim is so subtle. It would have been more expensive to install (because way more cuts) but looking back it might have been a better option. We also had the stripes vary in size from 2, 4, 6, 8″ which would mean that every single one of them would have to be cut down from the 12″. Again, more cuts = more expensive install.

So we opted for the above pattern, which were just simple stripes, at 4″, 8″, 12″ widths. It was a challenge conveying what we wanted so we drew it on the wall itself:

We gave them the drawing to help, and the install went pretty seamless. ALWAYS do a drawing, folks.

I have two regrets with this backsplash – the first is the width of the brass. They were out of the 1/4 inch brass trim (or maybe it doesn’t come in 1/4) and due to timing we had to install that week so we opted for the 1/8″ thinking it was good enough. It looks really pretty but it would have looked even more beautiful if you could see it even more. We’ve since done more research (because we are doing the bathrooms) and we think we have come up with a way to make it thicker by using a different profile of brass trim. I’ll write about that as soon a we are sure it will work.

The second regret is not putting brass horizontally behind the stove, where the backsplash was taller than the tile. It was 30″ high there, so we staggered the 24″ tile vertically, and I was told that they would butt up against each other tight enough that you wouldn’t see the grout line in between and they would look seamless. Not the case. You can absolutely see the grout line and it looks fine, but it would have looked soo much better had we put the brass trim horizontally. 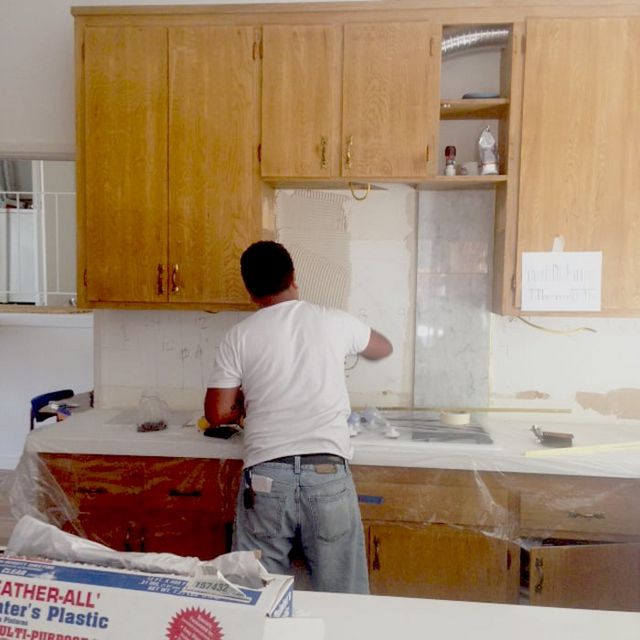 Here, below, I still had hope that the marble was kinda seamless butted up against each other. But this is pre-grout.

Then here, below, you see the trim on the sides which looks amazing – that is where it is 1/2″ deep and it really just finishes it off perfectly.

I have big pretty pulled back photos but I have yet to do the big, ‘kitchen redesign post’ (coming next week!) so I’m saving those photos for that reveal – always manipulating you guys to come back, I know.

Meanwhile the installation of the backsplash was $900 and took 2 1/2 days with 2 dudes. They cut on site – and it was pretty messy. I don’t think that is a particularliy good price, nor did we get hosed. Had it been a normal backsplash job with the 12×24 marble and normal grout it would have been 1/2 that. But because of all the cuts of the marble and the trim, it was a lot more. I didn’t get multiple quotes because it was the same contractor that we used for the rest of the kitchen, so sadly I can’t say with confidence that it should have been that price. So basically the backsplash cost: $900 (installation) $451 (carrara marble) $384 (brass grout) for a total of: $1735. In a way that sounds super expensive, but its already really the main feature of the kitchen. I was looking at some tiles that cost that alone, so maybe its not that expensive.

But look at that trim. She is so pretty, if I do say so myself. Now that I’m designing the bathrooms I’m debating if I try this in a different way in there, or if I’ve ‘done’ this and need to come up with another idea.

Eighty percent of loves the backsplash. Had the brass been 1/4″ instead of 1/8th” and had we done the brick pattern with the brass being horizontal, too, then I would love it 100%. Slight mistakes, but nothing that I’m too embarrassed about this time.

So my questions to you are this:

Does the horizontal grout line bug you guys?

Do you think it is boring if I do some sort of version of this in the bathroom (either the shower surround, on the walls, or on the floors)? It wouldn’t be the same pattern, but I love the brass detailing and even though I’ve done it, it’s definitely not done often enough for me to be over it yet, in fact I’ve never seen it before. Can I do it again or would you rather I try something new?

*Thank you Tessa Neustadt for the beautiful after photos.

View original
Save
49 loves 3 saves
Subscribe to Emily Henderson
Get updates delivered right to your inbox!

Will be used in accordance with our Terms of Service
More posts from Emily Henderson
Add a blog to Bloglovin’
Enter the full blog address (e.g. https://www.fashionsquad.com)
Contact support
We're working on your request. This will take just a minute...
Enter a valid email to continue