How Sweet It Is

I’ve learned maaaaaany things in this marriage of mine.

How to sleep without any covers.

How to grill, well… anything.

How to stock to a fridge so it overflows yet still produces nothing worthy of eating.

How to clean a bathroom without having to touch much of it.

How to unplug a hair dryer every time I use it.

How to ignore a four hour NASCAR race.

How to use up every inch of closet space.

How to coerce someone into enjoying unloading the dishwasher.

How to love country music.

How to ignore the rest of his music.

How to justify any food/shoe/candle/(insert materialistic item here) purchase.

How to sleep (or lay there with my eyes closed) next to jet engine snoring.

How to make a mojito.

How to have the house to myself for the night. *

How to turn someone into a major cheese lover.

And just last week – how not to make a quesadilla.

And I made it with a chicken quesadilla, so you know, OPTIONS. But was greeted with an “absolutely not” when I attempted to serve it and a “brussels sprouts in a quesadillas? You’re insane,” sort of look.

But you eat Brussels spouts in other things? So how can you pass them up when they are in buttery, crisp tortilla shells with bacon and cheese?

I ate the quesadilla on my own. 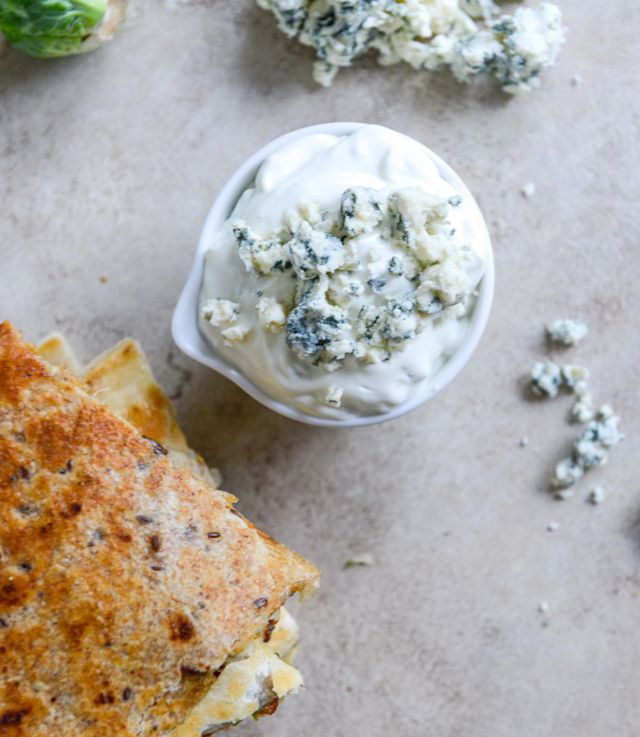 Today marks exactly five years of marriage for Eddie and me and that is completely insane. There are so many things that I thought would be different – like other jobs (worse ones), other homes (better ones), kids (cute ones?) and expectations (dumb ones.) It’s entirely too fitting that I’m sharing a recipe today that he wouldn’t even eat, not because he doesn’t enjoy my food (that would be a gigantic disaster in this life of mine) but because it symbolizes the life that we’ve come to love together where things aren’t always (or ever) perfect.

I also feel that, you know, being married and all and having to admit when you’re wrong (um, never?) also gives you a chance to get to know someone better than they know themselves. Which is why I can say that the minute he walked through the door that night, I could instantly tell he wasn’t in the mood to try something new. I wasn’t totally shocked when he thought Brussels in a quesadilla seemed way too weird, but had it been three years ago I would have bugged (nagged) him about it until he possibly 1. took a bite or b. became annoyed and ignored me for the rest of the evening.

Instead, I decided to just hang out and shove this quesadilla in my face while secretly knowing that he would love the combination and that most likely, within the next three months, he will eat it and totally forget about the night that he said it sounded gross.

So yeah. That’s what it’s all about. Five years, down the hatch! Hopefully 100 more to come, with lots of Brussels sprouts quesadillas.

Heat a large skillet over medium heat and add bacon. Once the fat has rendered and the bacon begins to crisp, stir in the sliced brussels and cook until they are soft, about 5 to 6 minutes. Stir in the garlic and the beans and cook for another minute. Turn off the heat.

Heat a large electric griddle or skillet (or even the same skillet, just empty it) over medium-low heat. To assemble the quesadillas, add a little smoked mozzarella on one side of each tortilla then cover evenly with the bacon brussels mixture. Top both with the remaining cheese and tortilla. Add a little olive oil or butter to the skillet and place the tortilla in once it's melted. Cook until the outsides are golden brown and crisp and the cheese has melted, about 3 minutes per side.

homemade blue cheese dip
Whisk together the yogurt, mayo, honey, salt and pepper in a large bowl. Add in almost all of the crumbled blue cheese, then spoon the dip into a bowl. Top it with the remaining crumbled cheese.

*put on a Girl’s marathon. Works like a charm.


View original
Save
88 loves 2 saves
Subscribe to How Sweet It Is
Get updates delivered right to your inbox!

Will be used in accordance with our Terms of Service
More posts from How Sweet It Is
Add a blog to Bloglovin’
Enter the full blog address (e.g. https://www.fashionsquad.com)
Contact support
We're working on your request. This will take just a minute...
Enter a valid email to continue