What can you do in the middle of a pandemic when your entire business activity revolves around interacting with the public? Such was the problem faced by After Dark Murder Mystery during lockdown. Rather than sitting around twiddling their thumbs, they decided to look at news ways to keep their business afloat. Faced with the large number of companies offering online activities, they decided to go down a different route. The Foul Play Murder Mystery Card Game was born !
The basic aim of the game reminds me of Cluedo - you have to uncover the perpetrator of a vicious crime. In this game though, you just need a pack of cards, rather than a big playing board, making it the perfect game to pack in your bag when travelling or going on holiday.
The game is set in Edwardian England and the Lord of the Manor has been murdered ! Obviously, the servants are the lead suspects and your job is to unearth evidence and catch the culprit. You have a choice though - will you play Good Cop or Bad Cop?

If you play as Good Cop, you set up the game by removing the fifteen evidence cards from the pack, selecting one of each colour, putting them back in the pack then reshuffling the cards. The evidence cards have facts such as hair colour, sex or clothing on them. Next, lay out nine cards in the middle of the table in a 3x3 grid as "the crime scene". Each player is dealt five cards and the rest go to the side as the "evidence locker". On each turn, you can take a card from the evidence locker and discard one in your hand or play a card, swapping a card with one of your opponents' cards. As you play, you will see the evidence cards go through which will show you who the murderer is. You must have the card showing this person to be able to announce your suspect, lay out your proof and (hopefully !) win the game.
In Bad Cop mode, each player takes seven cards and all cards are in play. You just need to find three evidence cards that match with a suspect card in your hand to win. 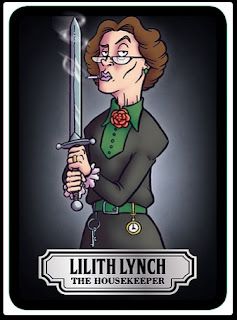 It takes a couple of games to get used to how to play and what each card allows you to do, but once you've got the hang of it, it's great fun. There's no waiting around as everyone is involved on each turn so it's a great option for kids who tend to get bored quickly, especially as you can watch players' faces when they pick up a card and try to detect signs of excitement, then remember which colour the back of the card was to try and pinch it !
Throughout confinement, I think we all spent far too long online and playing video games, so finding a new card game that is quick to learn, fun to play and keeps everyone off their screens is absolutely great !
FOUL PLAY The Murder Mystery Card Game - The Manor House Murder A game for 2 – 5 players | Age 8 £8.95 p&p www.foulplaygame.co.uk
Disclosure : We received the product in order to share our honest opinion.
// bpxt_ig="trans.gif";bpxt_ib=13999; //

View original
This post is tagged in:
Save
3 loves
Subscribe to Madhouse Family Reviews !
Get updates delivered right to your inbox!

Will be used in accordance with our Terms of Service
More posts from Madhouse Family Reviews !
Add a blog to Bloglovin’
Enter the full blog address (e.g. https://www.fashionsquad.com)
Contact support
We're working on your request. This will take just a minute...
Enter a valid email to continue