Make It and Love It

Ideas for a Shared BOYS Bedroom (…yay, all done!!)

You guys are so sweet — thanks for all the love on my Shared Girl’s Bedroom post that I shared yesterday! I had so much fun doing that for my 10 and 6 year old girls (Ellie and Chloe) and they’re excited that they finally have a room that is happy and inviting…..and is actually decorated with things they love. (It only took 2 years to finally get to it….ha!) And I’m just happy that the clutter is now gone, and everything now has a place — YES!!!!

Before our 5th baby Max was born almost 4 weeks ago, our 2 1/2 year old Oliver was still using the nursery as his room (and was still in the crib) and Connor had his own room. We knew once Max was born, he was going to need the nursery and Oliver would have to start sharing with Connor. And that cute Connor has been so excited to have someone to finally share a room with! For the past several years, he would ask to spend the night in the girls room on a weekend here or there, just because he has been a little lonely in a bedroom all by himself! So when we moved Oliver over into his room several weeks ago (so that I could finish the nursery), Connor was SO EXCITED!!! (I kept preparing him for what it would be like to have a 2 1/2 year old moving into his space….touching all of his things. But he said he didn’t care. Ha! I’ll make sure to remind him of that in another few months or so.)

Putting 2 (or more) kids together in room takes some planning….mostly because there’s twice as much stuff to find a place for. But I was also trying to come up with decor that worked for an 8 year old AND a 2 year old, while also making sure that Connor’s favorite toys and books could be kept out of reach. Luckily, Connor has such a relaxed type of personality, that he really didn’t care what direction I went with the decor (unlike my girls). Remember, he was just happy to have a roommate?!!

So, after gathering up a few boy-ish type items, our SHARED BOYS BEDROOM is now complete! (And because someone asked…I actually completed the boys room and girls room before Baby Max was born. I just haven’t had time to share until now.)

We really didn’t want to have bunk beds in the boys room for several reasons but the biggest reason starts with an “O” and ends with “liver”. Ha! Yes, that little Oliver is a turkey with a spunky little personality and both Steve and I worried about what kind of acrobatics he would try if ever left alone in a room with bunk beds. So, maybe sometime down the road we’ll get the boys bunks….but for now, they get their own space!

Oh, and in case you’re wanting new bed frames with a headboard and foot board, but don’t want to spend a ton….we made these bed frames for MUCH CHEAPER than purchasing some, and they came together VERY QUICKLY. We used the tutorial HERE and love how they turned out! Oh, and as for staining them, I used a light layer of this stain (wiped it on, then wiped it off…very quickly) and then once it was dry, added little touches of this stain and then wiped it right off as well. It kind of gave it an old wood look, with a touch of grey. We used a topcoat similar to this spray kind, because it was quick and we weren’t picky about a super nice smooth finish like we were with our kitchen table that we made (and bought a more expensive topcoat). Anyway, the whole process for these bed frames is pretty quick! :)

The boys bedroom is kind of a funny shape….and is more long than it is wide. And the only way 2 beds would really fit with room for a dresser and shelves, is along this shorter wall that has a window. At first, I kinda hated that the beds overlapped the window but once I hung the curtains and tucked them behind the bed frames, I didn’t mind it much anymore. And kinda love how it all overlapped and blended together….especially with that blue wall in the background! (And yes, that’s the same blue we used in Max’s nursery makeover….Tempe Star, by Sherwinn Williams, but color matched at Home Depot with Behr paint.) 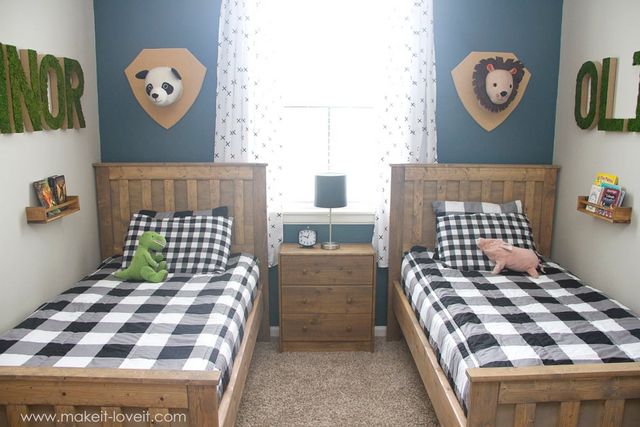 Oh, and good golly, this room was tricky to photograph….so it was hard to get everything in the picture. But up at the top of the window are these little wooden arrows that I bought at Hobby Lobby, already pre-painted in colors that worked in this room. But I added some dried moss to a few of them….to tie in with the moss letters above their beds. (I bought the moss at Michaels and it comes in sheets, so I could trace out the shape on the back, cut it out, and just hot glue it down.)

Oh, and those curtains?? They actually top sheets from some twin sheet sets I bought at Target. I just really liked the print and figured it was about the same price as buying fabric by the yard and sewing them into curtains. And this way, it was already sewn for me. I just cut a slit in the top of the sheet at both ends where it’s folded over….and slid the curtain rod in. Easy, right??

And then along this longer wall…..there was room for a big dresser and a set of shelves with storage boxes (both from Ikea). We store toys in those storage boxes (that I didn’t take a good picture of…sorry) but there are also bins in their closet for Lego sets and other bigger toys. (Oh, and I just remembered right this second, and totally should have photographed, but there are two large storage bins under both of their beds. One holds toys, the other one hold shoes, boots, diapers for Oliver, etc.)

And do you see that picture of Connor and Oliver above the dresser? Yep, another picture that I printed out on my computer and transferred onto a wood background, that I actually bought from Hobby Lobby, already attached together and stained. (The tutorial for transferring photos onto wood is HERE……and more examples of it are in the Shared Girls Bedroom post HERE.) I actually printed this image of Connor and Oliver in sections on 8.5×11 printer paper and then taped it together on the back, so that it would be nice and big. But you could also print yours nice and big at a copy store for just a few dollars…just make sure they print with a laser printer, not inkjet.

Those letters above each boys’ bed are actually lightweight paper mache letters that I found at Hobby for $5 each (on sale). I used sheets of dried moss (that I found at Michaels) that I traced the letters onto on the back of the moss, cut it out, and then hot glued it to the fronts of each letter. I actually used a lot of the scraps of the moss too and just pieced them together onto the letters and because it’s kinda fluffy, it just blended right together. Oh, and I attached them to the wall with these velcro strips. Worked perfectly!

Oh, and yes, I know…..there are hanging stuffed animal heads in all 3 kid bedrooms now, and maybe it’s a little overkill, but I just couldn’t help it. They were pretty inexpensive ($20 at Target) and I just think they’re so darn cute!!!!!

And just for fun, Steve cut out these trophy type mounts that we hung the animals from, that he made from some scrap wood we had in the garage (this is MDF…but you could anything) and I love how it made the stuffed heads really pop out on the wall! We left our wood plain, but you could always paint it to make it match your decor.

On the other long wall (opposite the dresser) we attached a few wood (painted black) shelf brackets to the wall (a few dollars each from Ikea)…..and then placed some pieces of wood (1×8’s) as the shelves, on top of the mounts. We stained the wood just like the bed frames above.

We made these shelves because we needed a spot for books…..but also to hold a few decor pieces as well. Since taking this picture I have loaded up those two lower shelves with more books, because these boys love books, and there was plenty more room. (Oh, and that gold #2 on the bottom shelf was an award that Connor won at a Pinewood Derby competition for Cub Scouts….and he is SO PROUD of that thing, so it has to be displayed. Ha!)

You can kinda see the shelves on the left (in the picture below), as you walk into the room. Perfect for whatever you need to keep up and out of the way!

Oh, and these shelves are on the wall opposite the window. We hung them on this little section of wall between the entryway of the room and the door for their closet and they hold items that Connor really doesn’t want Oliver to touch….like his Lego creations that he puts together regularly. Then, he can rotate them with other creations he makes. (I found the shelves on a clearance sale at Hobby Lobby otherwise, we would have just made more shelves like the books shelves….but I thought the hardware was cool on these. But after hanging them, Steve pointed out that they’re upside down. Grrrr. But I liked the brown side of the shelves up, not the black, so I thought that was correct…..so maybe we’ll fix it and flip the wood over one of these days!)

And that’s it!! A room for my 2 sweet boys who are equal parts rascally and cuddly. Man, I love being their mom! And love that they still think that I have magical powers and can make whatever they want! (Ha…..I have them fooled!)

Anyway, I know that was picture overload…but I hope it was helpful! And gives you some ideas for your own kids’ room(s)!

And now that all 3 kid rooms are complete, I need a nap! Ha! But not really….because I have other projects I’m dying to complete, especially for our new baby Max, who we’ve been loving on for the past few weeks.

The post Ideas for a Shared BOYS Bedroom (…yay, all done!!) appeared first on Make It and Love It.

View original
This post is tagged in:
Save
12 loves 3 saves 2 comments
Subscribe to Make It and Love It
Get updates delivered right to your inbox!

Will be used in accordance with our Terms of Service
Forgot Password?
Subscribe to Make It and Love It
Get updates delivered right to your inbox!

Will be used in accordance with our Terms of Service
More posts from Make It and Love It
Add a blog to Bloglovin’
Enter the full blog address (e.g. https://www.fashionsquad.com)
Contact support
We're working on your request. This will take just a minute...
Enter a valid email to continue