Let’s end this series of Paleo Lunchboxes with a bang…or better yet, a blini! Everyone loves brunch, so why not pack it for lunch? In our final installment of this year’s Paleo Lunchbox series, we brainstormed with our buddies at LunchBots about our favorite brunch items and crammed ’em all into one simple, portable, and crave-worthy meal.

Alright, these blinis are nothing fancy. They’re simply a savory mod of my Cinnamon and Coconut Pancakes, but if you need it all spelled out, keep reading ’cause the blini recipe’s at the very end of this post. These blinis freeze well, so I make a batch and pack them straight from the freezer (they’ll defrost by lunchtime).

In my opinion, a blini’s naked unless it’s adorned with a couple of smoked salmon ribbons. Oddly enough, I didn’t always feel this way. As with fancy mustard and sauerkraut, I avoided smoked salmon until I tried it again in college. Now, I can’t get enough—especially paired with thinly sliced shallots, capers, and dill. 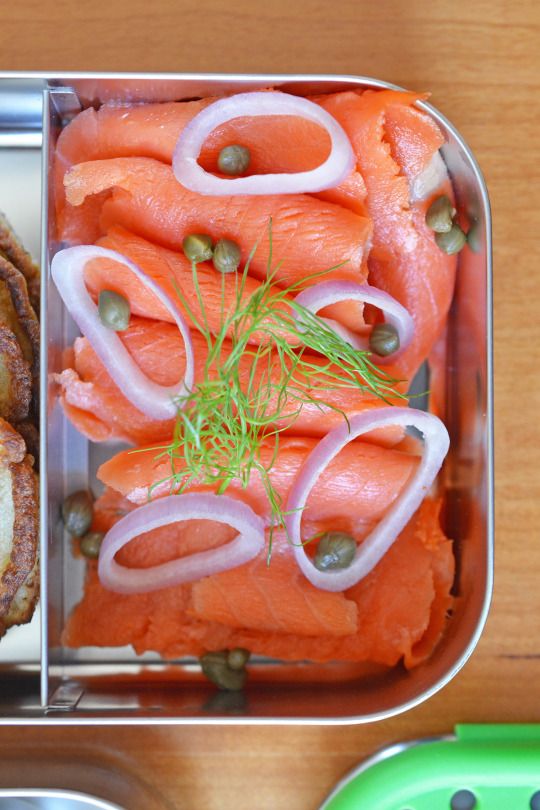 There’s tons of smoked wild salmon available at the market, so my selection just depends on my mood. If I’m doing a Whole30, I make sure the ingredient list doesn’t include any sugar or crazy additives.

My favorite “glue” to keep the salmon attached to the blinis is a healthy smear of salted grass fed butter or ghee. Bacon & eggs are a brunch staple, and I’ve combined them in this simple mash-up of the Lazy Devils and Bacon-Topped Deviled Eggs recipes from our cookbook. I’m not going to stop you from making my Bacon-Deviled Eggs, but if you want a super simple shortcut to deliciousness, follow these directions:

Halve a hard-boiled egg, spread some mayonnaise on the cut surface, and top with crunchy bacon bits. If you’re not into mayo, guacamole is also a fantastic way to keep your bacon in place. (Don’t worry—if you decide to use store-bought mayo or guacamole, your secret’s safe with me.)

Add some blanched sugar snap peas and a handful of berries, and you’re all set!

Alrighty, folks! That’s it for this year’s Paleo Packed Lunchboxes with my friends at LunchBots! Don’t forget to refer to this epic roundup post for even more portable midday meal inspiration! Now, go forth and pack your lunches!

Here’s how to make them:

(Step-by-step photos are nearly identical to those in my Cinnamon and Coconut Pancakes post.)

The blinis are best eaten fresh, but you can also freeze them. I freeze the pancakes in a single layer on a baking sheet until solid, then I store them in a sealable freezer bag for a few months.

Looking for more recipes? Head on over to my Recipe Index! You’ll also find exclusive recipes on my iPad® app, and in my New York Times- bestselling cookbook, Nom Nom Paleo: Food for Humans (Andrews McMeel 2013).

Will be used in accordance with our Terms of Service
More posts from Nom Nom Paleo
Add a blog to Bloglovin’
Enter the full blog address (e.g. https://www.fashionsquad.com)
Contact support
We're working on your request. This will take just a minute...
Enter a valid email to continue