One Good Thing By Jillee

I originally planned on this post being about gift BASKET ideas but the more I thought about it, the more I decided I was sick of baskets. Don’t get me wrong…I LOVE baskets! I probably have WAY too many of them around my house. But GIFT baskets have been done every possible way I could think of so I decided to think outside of the basket. :-)

It didn’t take long before my thoughts turned to JARS! I think I love jars ALMOST as much as I love baskets. Particularly these versatile and inexpensive ones you can almost always find at your local Walmart. (These were $9.99 and $7.99 respectively.) I use them as containers for my homemade laundry detergent, flour, sugar, as a vase for flowers, I’ve even used them as a “punch bowl.”

Today, however, I am using them as a way to give simple, creative, and inexpensive gifts for lots of different people on your list! I initially was going to do just a few different ideas, but as I so often do, I took the idea a bit too far. Oh well. Hopefully my over-achiever tendencies will result in some added inspiration for someone. :-) Red and green are so predictable this time of year! :-) Add a little pizazz to the holiday with a splash of orange! Orange is such a happy color! This gift in a jar is limited only by your imagination (and the selection of orange items you can come up with.)

I couldn’t resist creating this more “literal” interpretation of the “Orange” You Glad It’s Christmas theme. It doesn’t get much easier than dumping a bag of clementines into a jar and adding some twine. Beats giving a “box” of oranges (like I have many times before!)

Guy Food In A Jar

Guys are such simple creatures. Don’t believe me? Be sure to read my nephew & business partner Scott’s post about Gift Ideas for Guys. With the “simple” thing in mind, I added bottles of soda, queso, beef jerky, and a candy bar to a jar and called it good. I know any of MY guys would love it!

It never fails that someone in our house is sick over Christmas. Germs are running rampant, we are all stuck indoors, and stress levels are through the roof. Perfect storm for a “bug” to strike. This jar would be a welcome gift for anyone feeling under the weather. Ice Cream Party In A Jar

It’s hard to think of anyone who wouldn’t be thrilled to receive an ice cream party in a jar! After I had taken the pictures for this I came up with the idea of adding a tag that says “Just Add Ice Cream.” Cute huh? :-) Do a family on your list a favor and give them a ready-made family activity in a jar! Kids love decorating cookies ANY time, but especially at Christmas. Save Mom & Dad the work of having to make cookies from scratch. They have enough to do this time of year! :-) 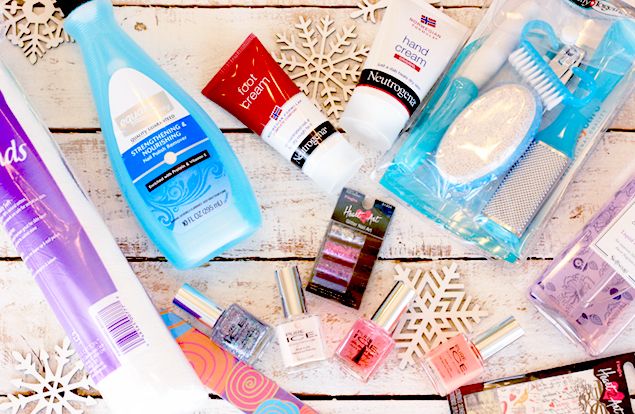 Mani-Pedi In A Jar

Winter weather can wreak havoc on hands and feet! Give the gift of soft and pretty fingers and toes with this mani-pedi gift in a jar. Great gift for a girl or a guy (the guys can re-gift the polish and glitter if they want!) :-)

Taco Soup In A Jar

Christmas “treats” don’t always have to be SWEET. Give the ultimate gift…..not having to figure out what’s for dinner! In my opinion that is priceless.

Comfy Cozies In A Jar

This gift in a jar takes the gift of hot cocoa to a whole new level! I’ll take your hot cocoa gift and raise you some comfy sweats, soft socks, cozy scarf, toasty warm gloves, and a snuggly hat!

Caramel Apple Cider In A Jar

Another variation on the warm beverage gift! Apple cider with a creamy twist! You can even add some insulated cups so they can share it with their friends!

The best thing about these “gift in a jar” ideas? They can all be done literally at the last minute….which is a good thing because Christmas is will be here before we know it! :-)

Note: All of the items purchased for this post are being donated to our local Women’s Shelter.

View original
This post is tagged in:
Save
76 loves 31 saves
Subscribe to One Good Thing By Jillee
Get updates delivered right to your inbox!

Will be used in accordance with our Terms of Service
Forgot Password?
Subscribe to One Good Thing By Jillee
Get updates delivered right to your inbox!

Will be used in accordance with our Terms of Service
More posts from One Good Thing By Jillee
Add a blog to Bloglovin’
Enter the full blog address (e.g. https://www.fashionsquad.com)
Contact support
We're working on your request. This will take just a minute...
Enter a valid email to continue