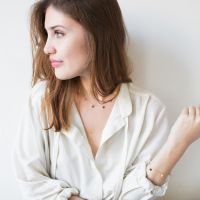 The Five Piece French Wardrobe – How to get started

When a French girl shops, it isn’t a solitary act of buying something new. It’s part of a lifelong process of editing her environment, making small but meaningful additions to her home, her closet and her life.

In the last decade, a new trend has taken over certain communities of the internet: the Five Piece French Wardrobe. Perhaps you’ve never heard of it, but apparently the concept of a capsule wardrobe where you own a limited amount of clothes and throw out everything that doesn’t fit or suit you is the new big thing.

You might have heard of the concept of a ‘capsule wardrobe’ before, a term that became somewhat of a fad in the sixties and seventies; the world started globalising and plane and overseas travel became more and more popular and available to a large group of people. This meant that one could only bring along a limited amount of garments, which then limits the amount of choice. Somehow, a large sum of people started noticing how liberating it felt to choose from less and valued the pieces they had more. The fashion world started toying with the idea, and the concept of a capsule wardrobe suddenly became trendy.

About The Five Piece French Wardrobe

Flash forward to the age of the internet, where a large amount of people started picking up on the idea of limited spending but a wardrobe full of quality items and started discussing their ideas on forums. A thread called the Five Piece French Wardrobe on The Fashion Spot started popping up and united all sorts of people with likeminded ideas and goals. Up to today, people getting into the idea of the Five Piece French wardrobe read this thread thoroughly and take note of the tips, plans and the way the members built up their ‘ideal’ wardrobes step by step. However you want to label it or explain it, the idea behind the ‘capsule wardrobe’ and ‘Five Piece French Wardrobe’ stays the same: less is more.

In 2009, Forbes magazine published a popular piece on The Secrets of Well-Dressed Women, centering around themes of ‘The style of French Women’ and ‘shopping selectively,’ intensively elaborating on the idea that American women are doing something wrong when shopping and going for the cheap thrill instead of quality that will last. They included the idea of ‘shopping with a plan’ and the nowadays very popular theory of the Cost-Per-Wear ratio. This purchase plan asseses each piece you buy on a cost-per-wear basis; how often will you wear this dress and will that justify the price you pay for it? A concept which comes in handy when searching for the basics of your wardrobe and that directly defines the items you actually need.

A new blog was also launched around that time called The Uniform Project, where owner Sheena Matheiken challenged herself by wearing the same little black dress for 365 days in a row with the imperative to make her look different and fashionable every single day. In 2011 Fashionising editor Daniel Dykes stated that The Curated Wardrobe is the new Luxury and mentions that a shift is taking place; from owning more and more, we are starting to want less, but in better quality. The main argument is that with the rise of fast-fashion, nowadays nearly everyone in a developed nation can stuff their wardrobe with as many garments as they’d wish for, making a curated wardrobe a new foreign object that requires skill and can be attained by very few only with patience and effort.

In the last years, editors and fashionistas started to get in on the idea and marketed their ‘fashion books’ with the idea of the French woman being the most fashionable and all of them owning a very small, very stylish capsule wardrobe. This stereotype (as with any stereotype really) turned into a cliche rather quickly, but the style books still stay relevant with their lines of advice all being somewhat the same: Buy less, own more. How To Be Parisian Wherever you Are and Lessons from Madame Chic: 20 Stylish Secrets I Learned While Living in Paris all are in on the same standard: move to Paris and only own one pair of jeans, but have a very good point: don’t overbuy, but invest in what you need and wear daily.

The capsule wardrobe: An ethical choice

Luxury aside, the idea of a curated closet is also one of necessity, having a serious alignment with the ecological and ethical thinking movement that is going on currently. To me, the idea of becoming vegan and supporting local and fair trade while still overbuying and overconsuming is ridiculous and I find it somewhat dodgy when seeing people that I assume care about the environment elaborating on their massive shopping hauls and dozains of new products they splurged on. Doesn’t seem so ethical, does it? If you look at numbers, this Wrap article mentions that the average UK household owns £4,000 worth of clothes – and around 30% of clothing in wardrobes has not been worn for at least a year, thus making the cost of this unused clothing just lying around British houses around £30 billion. A large waste and the direct result of reckless shopping thrift and fast-fashion mania, if you ask me.

So.. where does the idea of the Five Piece French Wardrobe come in then? I think it’s the idea of a curated, environment-friendly wardrobe that’s more important than ‘just buying five pieces each season’ or ‘trying to look French’ – whatever that may imply. Having lived in France for a long time I can only state that there is no such thing as a standard ‘French look’, but I can imagine when looking repetitively at pictures on the internet of Birgitte Bardot and Picasso wearing a Saint James striped jumper you may start to imagine that ‘French style’ is a world on it’s own with stern rules. Perhaps it is, but it’s not the point of the Five Piece French Wardrobe. Just because it’s called the French Wardrobe philosophy doesn’t mean you have to emulate the “French girl style”. At its core, this is about how to buy things, not what to buy.

My stance on all this, is that the idea of curating your wardrobe is not a DIY-esque style challenge, an utilitarian cull or a simple marketing trick. Neither is the idea behind the Five Piece French Wardrobe to just look French or Parisian. On the contrary, it is the simple idea of shopping thoughtfully, buying less and leaving behind less waste. This all while still looking put together and comfortable while exploring and setting limits to your own style.

How to get started

Every season (or every two seasons) you are allowed to buy 5 new items to enrich your wardrobe. This can be anything, but some exclude basics such as underwear and socks from the list. This is all up to you. It works best to create a wishlist at the beginning of the season and to carefully make a list of the five items that you really want this season. Are your jeans falling apart? Do you need a new blazer for work? Since you are limited to five pieces only, chances are that you obtain a more sceptical look to that top on sale at Net a Porter or those jeans that don’t fit perfectly but are the last ones in stock. Try to have a look at your wardrobe as a whole and throw out everything that you don’t wear anymore. You can sell it on Ebay or VestiaireCollective, or have a massive swap with your friends. Try to keep as little of everything as possible, and focus on what you wear most. Make these essential items the key staples of your wardrobe, and make sure your next purchases go together perfectly with these basics.

You don’t have to have a huge clothing budget to be able to spend money on quality pieces. In fact, I’d argue the smaller your budget, the more crucial it is to make quality paramount. And quality doesn’t mean “buy brand/designer items at retail prices”. For me it means “stalk sales and learn how to use Ebay and secondhand shops.”

My goal for 2016 is to not strictly live according to this principle, but use the Five Piece French Wardrobe rules as a guideline to be a bit more careful and selective on my new purchases. I’ll update frequently and review my spending habits on the blog, so stay tuned.

A list at the beginning of the year works perfectly to keep track of your current basics and what to focus on this season.

– Into Mind is a blog that helps you define your basics and helps you create a capsule wardrobe.
– My dear friend Jessica has been writing about her Five Piece French Wardrobe experiences for over a year.
– Which shoes are your basics? Read my review of the Repetto ballet flats and the Salvatore Ferragamo Vara flats.
– See how I’ve been combining and wearing my basic pieces.

The post The Five Piece French Wardrobe – How to get started appeared first on Sartreuse.

View original
Save
30 loves 147 saves
Subscribe to Sartreuse
Get updates delivered right to your inbox!

Will be used in accordance with our Terms of Service
More posts from Sartreuse
Add a blog to Bloglovin’
Enter the full blog address (e.g. https://www.fashionsquad.com)
Contact support
We're working on your request. This will take just a minute...
Enter a valid email to continue